‘Our Freedoms Have Gone’: Trucker Protesting Against COVID-19 Vaccine Mandates Speaks Out 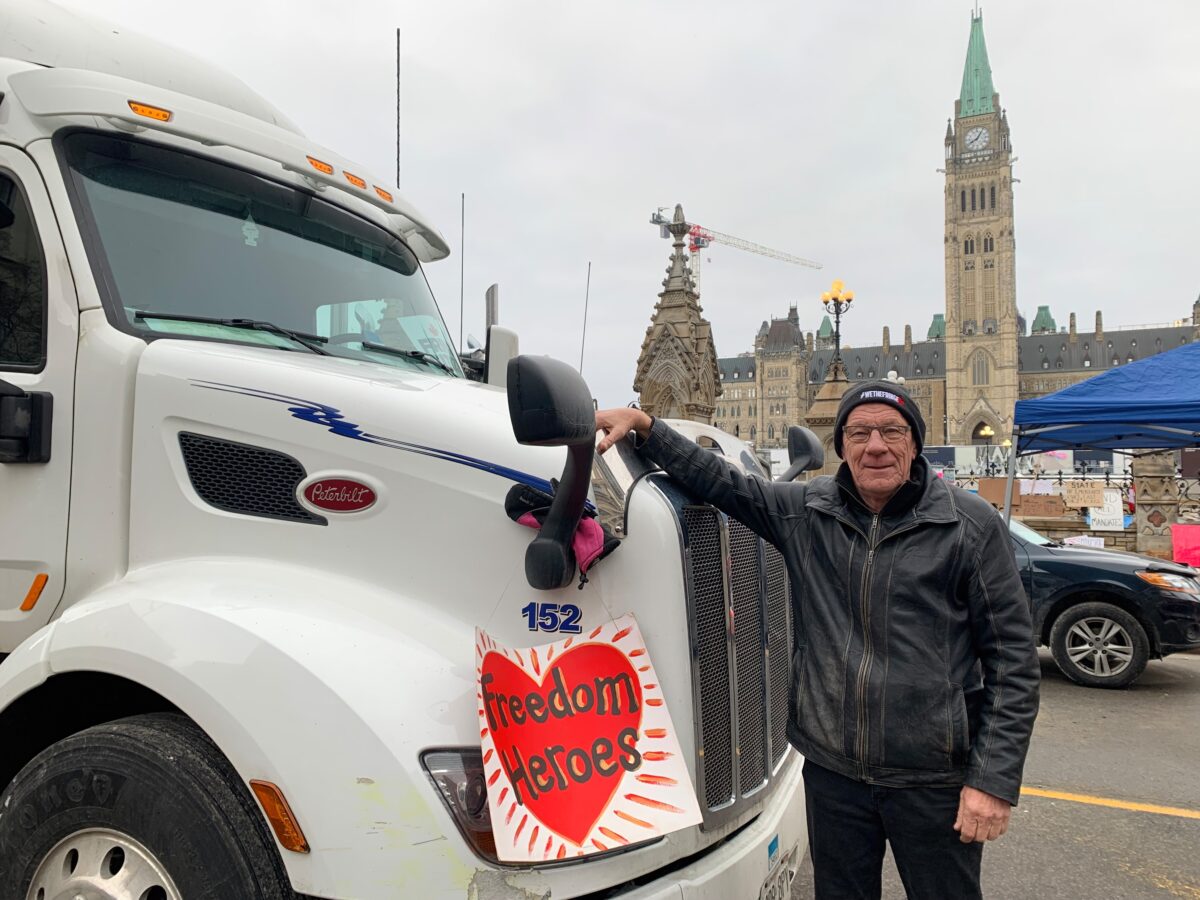 OTTAWA, Canada—Walking on Feb. 11 through the parking lot of trucks that has paralyzed the center of Canada’s capital Ottawa the main word you hear uttered is “freedom.”

It is not only spoken but regularly features on signs, flags, and messages that not only adorn the rigs, but are placed along the fleur-de-lis topped metal fence that edges the parliamentary and governmental precinct.

The second most mentioned word is “peace” and none the hundreds of Canadian truckers involved in what has been dubbed the “Siege of Ottawa” seem the slightest bit interested in doing anything other than staging their protest against government vaccine mandates in a peaceful manner.

Disruptive, yes. Costly, absolutely. Infuriating to many, yes. Violent, no.

“I have 19 grandchildren,” Bill Dykema, 71, from Grimsby, Ontario, told The Epoch Times. The protest, he said, is “for them and to give them their freedom.”

Dykema, a trucker, was one of the first drivers to block Wellington St, which borders the parliamentary precinct.

“My grandson wants to go to university but he can’t because he’s not shot, not injected,” Dykema said. “I don’t call it a vaccine or injection because it’s bad stuff in my book. Our best friend, she got one shot—we buried her.”

Dykema used to cross the US–Canada border every week. Due to the mandate, which stipulates proof of vaccination or an isolation period, he cannot go anymore.

“I’m just a 71-year-old, poor old working man. Our freedoms have gone. You can’t go to a restaurant, unless you’re shot,” he said.

Dykema estimates he is probably losing $1,400 to $1,500 a week. The trucker says he is living in his truck at the protest camp. His truck is right at the heart of the blockade on the corner of Wellington and O’Connor streets.

Dykema says he will remain until the action is over. “People have been great here,” he said.

Armand Theriault, 57, is a retired worker from Quebec. He is in Ottawa to support the truck drivers. He says the protest is for freedom.

Dressed in a green winter jacket, a business shirt, and with a tie, Theriault has a quiet determination about him.

He arrived on Jan. 10 to support the truckers’ actions and spent his first evening walking around the vehicles keeping an eye out for anything amiss.

Not everyone in Ottawa is happy with the truckers’ actions.

As Theriault is interviewed, a man walks by and loudly tells him something in French.

The man said, “you crashed the economy.”

Theriault shrugged it off and said it was important to provide extra security at night.

“We do everything we can,” he said. “This is a peaceful protest and we want to know the truth. It is not just us who will win, every country around the world will.”

Dana-Lee Melfi, 50, stands with a Canadian flag in one hand and his right almost frozen in a peace sign.

But when he speaks it is with an educated voice in well-measured tones.

“I have been here since before the beginning. I was born in Ottawa and I can’t stand to see what our country is becoming. I was standing on the Parliament Hill for the first couple of days with a simple message of peace. We are here in peace, but there was a couple of bad actors and jokers in front of these trucks,” he told The Epoch Times.

“So the truck drivers have asked me to stand here and hold the line. I stand here 10 hours a day and show our simple message that we are here in peace.”

What does Melfi do for a living?

“I am a government employee… maybe,” he said, laughing.

“No one can force me to do anything to my body that I do not wish,” he said. “It’s very unCanadian.”