Peru: Five people have died so far in protests against the dismissal of Castillo. Protesters seized the airport and a dairy factory in Arequipa 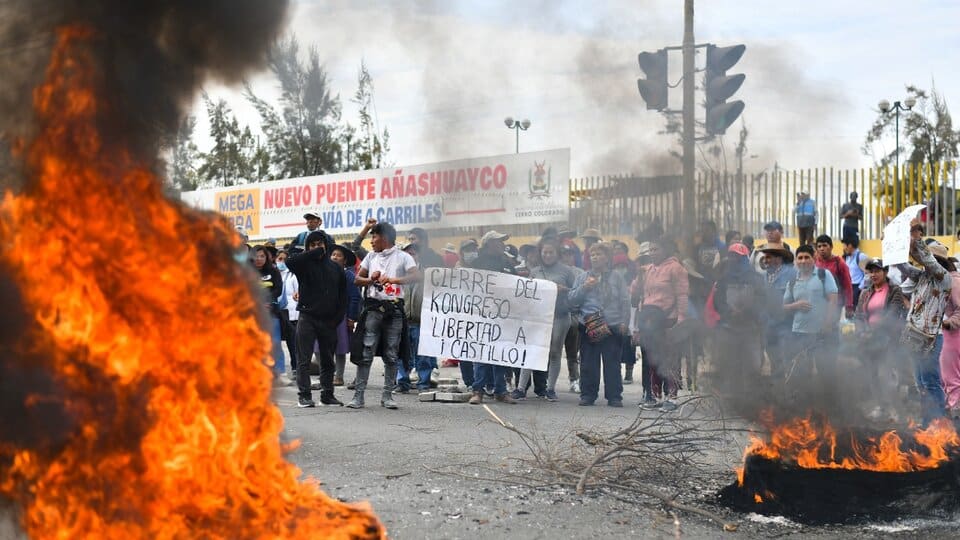 Peru experienced another day of extreme tension this Monday, not even softened by the announcement by President Dina Boluaarte that she would promote moving elections to April 2024.Due to growing protests by thousands of supporters of former President Pedro Castillo in several cities and regions, which included road blockades and airport and university businesses, Three protesters died on Monday In a protest demanding the resignation of Boluarte in the departments of arequipa why ApurimacDue to which the total death toll in Peru in the last 48 hours has increased to five.

one death occurred in ArequipaIn Peru’s second city, around 1,500 protesters occupied, during the police crackdown, to recover the runway of the local airport. The other two deaths occurred in a march dispersed by riot police in Chincheros.Origin of Boluarte, Apurímac Department.

In Chincheros, protesters set fire to the premises of the Ministry of Public Affairs and the police station. “We need support in Chincheros! Let a helicopter come in to disperse the people. We are only 30 soldiers. We are already running out of ammunition, we have injured police officers,” a police officer from Chincheros pleaded in an audio leaked by the press. It is on record that they have resolved conflicts or crises”.

This Monday a group of protesters attacked Arequipa airport and tried to take over To call for elections and to demand the shutdown of Congress. Local media reported this Hundreds of protesters entered the airport runway and caused some damageuntil they were evicted by the police and members of the armed forces.

Aeropuertos Andinos del Peru, the company that manages Arequipa’s Alfredo Rodríguez Ballón airport, said the airport was closed and evacuated after protesters “destroyed security infrastructure and set fire to control booths”, while media Locals reported at least four people injured. Clashes with police, in addition to the death, were confirmed hours later of one of the protesters.

also in Arequipa Gloria Dairy Factory, one of the mostThe largest in the country, was forcibly occupied by the protesters, Local media reported that a crowd of hundreds gathered in front of the dairy plant, where they destroyed and burned factory contents, including a company truck. Gloria Company employees from other parts of that department were evicted for safety reasons and to avoid similar situations.

Such is the spiral of violence that in the Peruvian city of Andahuaylas on Sunday police officers repressed civilians in the middle of a funeral procession for two people killed in protests. The coffins were carried on shoulders and shifted to the city police station policeman Fired tear gas shells and fired shots in the air.

In the meantime, Students occupied the University of Cajamarca and tried to do the same at the Houses of Study in Jain and Chhota., In all cases, calls for elections in 2023 and the shutdown of Congress were reiterated, although some protests were met with a lukewarm defense by Castillo.

RPP radio reported two roadblocks in Trujillo, four in Puno, seven in Ucayali, ten in Arequipa, one in Tacna, seven in Abanque and six in Ica, while passenger transport did not reach Cusco, the country’s main tourist city, nor Only left The picture could get worse if agriculture unions and farmer and indigenous organizations follow through on their announcement of an indefinite strike starting TuesdayIn this case with the additional fact that the group demands the “immediate freedom” of Castillo.

Bolurat’s announcement to send a bill to Congress to move the elections from April 2026 to April 2024 has not pacified the protesters, who are demanding Castillo’s release, the shutdown of parliament and new elections. The focus is on Congress’s response to the proposal for early elections, as it means he has reduced his term by two years.

According to Peruvian law, it is necessary to do so in two consecutive assemblies to cut mandates such as presidential and legislative, a process that can last up to a year. And a constitutional reform is necessary to hold early elections.

trying to stem the tide of protest The government on Monday sacked 26 regional presidents of the country.appointed by the Castillo government, Under the pretext that they “incite protest”, Boluarte also declared a state of emergency in “areas of high social conflict”.

in the meantime The Office of the United Nations High Commissioner for Human Rights declared itself “deeply concerned about the potential for an escalation of violence”., In a statement issued in Geneva, the office said that “given the number of protests, including strikes expected this week, we call on all involved to exercise restraint.”