Peru: from attempts to oust Pedro Castillo to an abrupt end | Background of one and a half years of rural teacher’s government 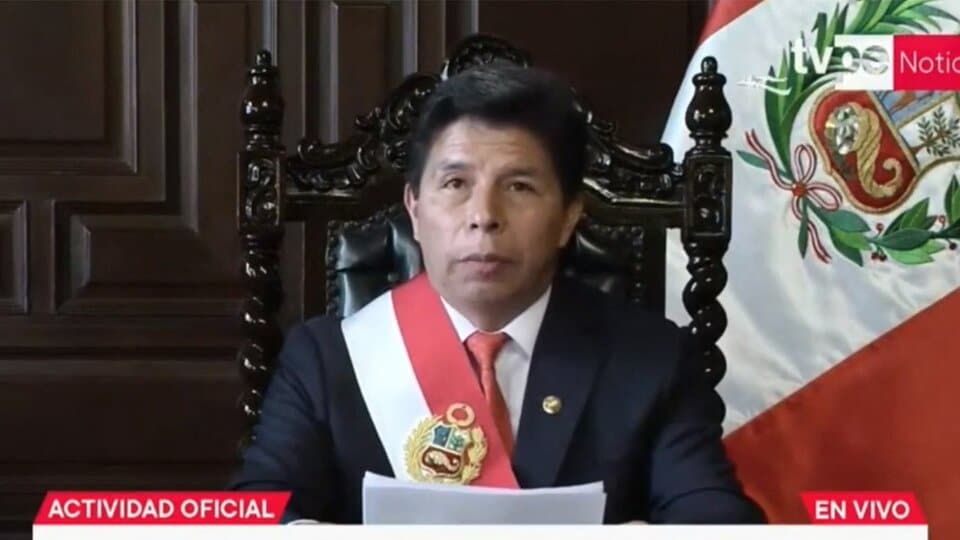 Rural teacher and trade unionist pedro castillo They had a troubled president. From the outset, he faced attempts by the parliamentary right, a bloc dominated by the extreme right, to oust him. But was weakened by the abandonment of proposals for change What raised many hopes was the serious shortcomings of his management, repeated signs of ineffectiveness, questions over appointments and corruption scandals. Four attempts were made to remove him from the presidency before Castillo decided to stage a coup against Congress.Trying to shut it down in an unconstitutional ruling that failed.

Castillo surprisingly won the 2021 election. In a fragmented election he moved to the second round with 19 percent of the vote and suffered a narrow defeat in the second round. keiko fujimori, Until then he was a character outside the political class, best known for leading a protracted teachers’ strike in 2017. Peasants and Andean natives, historically excluded from most of the region, identified with him, seeing him as one of their coming people. for the presidency for the first time. He won the election with a speech to replace the neoliberal economic model and support of those marginal areas. and with a promise to convene a Constituent Assembly to replace the neoliberal constitution inherited from the Fujimori dictatorship. Those promises were not kept. Castillo kept up the speech of change, but did not implement government measures to put them into practice. And the Constituent Assembly was unable to get off the ground due to opposition from the right-wing controlled Congress.

bullying from the right

Wright tries to ignore Castillo’s legitimate election victory by citing non-existent election fraud, The first coup attempt to prevent him from assuming the presidency failed. But the attacks did not subside. From the very first day of his government, that extreme right wing tried to remove him. Castillo took office with a minority in Congress controlled by various right-wing groups. He won the election as the candidate of the Peru Libre (PL) party, which defines itself as Marxist–Leninist, although Castillo always denied being a communist. His government began as a Progressive Front, which was joined by other sectors of the left outside the PL. but Internal divisions quickly erupted and within six months that front collapsed, Then he was separated from PL. He surrounded himself with an environment that alienated him politically and this was seriously compounded by frequent corruption scandals.

When he had barely completed four months in government, the ultra-right filed the first request for his removal, alleging “permanent moral incapacity” of the president due to corruption charges. This fuzzy figure lends itself to arbitrariness if you have the necessary votes. The complaints against Castillo were based on unconfirmed testimony. With 46 votes cast, the first attempt at impeachment was 87 points away from the need for a two-thirds unanimous Congress to approve. In March, Wright tried again to impeach the president for the same reason and the same arguments. He was again unsuccessful securing only 55 votes.

In October, the prosecutor’s office presented a complaint against Castillo to Congress, accusing him of leading a criminal organization to direct public tenders. The allegation is based on testimony from former government officials and businessmen who accuse Castillo of accepting bribes. Castillo’s accusers are being prosecuted for corruption and have exchanged incriminating testimony against the president for judicial advantage. This fiscal complaint led to a political trial in Congress, another way to remove him, despite the fact that the constitution does not allow impeachment of the president for crimes that warrant prosecution of Castillo. He can only be prosecuted for treason, unconstitutionally shutting down Congress, or obstructing elections. Based on this tax complaint, parliamentary opposition Started the third impeachment process Criticism of the president for “permanent moral incompetence,” which was to be seen this Wednesday but before Castillo shuts down Congress. There was great uncertainty over whether he would get the 87 votes to remove him.

Before this third recall petition, The parliamentary opposition launched another impeachment trial against Castillo for treason over the matter. An absurd, baseless allegation, based on a press statement by the president in which he expressed his sympathy with Bolivia’s demand for an outlet to the sea and spoke of the possibility of a referendum to ask Peruvians whether they would agree to that demand. support, which was never put into practice. Despite the unusualness of the allegation, a parliamentary commission cleared it at first, but the Constitutional Court quashed the process, saying it had no basis.

Another maneuver in Congress to remove Castillo was a few days earlier to approve a rule that allows the President to be “suspended” for temporary disability with 66 votes instead of the 87 needed to remove him. The constitution allows for temporary suspension of the president, but refers to health problems or others that temporarily prevent him from exercising the presidency. Wright wanted to enforce this by leveling corruption charges against Castillo. This was Plan B for the right if they didn’t get 87 votes to remove “permanent moral turpitude”.

in that respect oppression of the authority, and the serious problems and weaknesses of his government, and the denunciation of corruption against him, Castillo chose to counterattack by announcing the closure of Congress – with which he fell in the coup that criticized him – but he was left alone and ended up in custody.