Peru: Protests and civil outcry grow | After the overthrow of Pedro Castillo and the suppression of the protesters 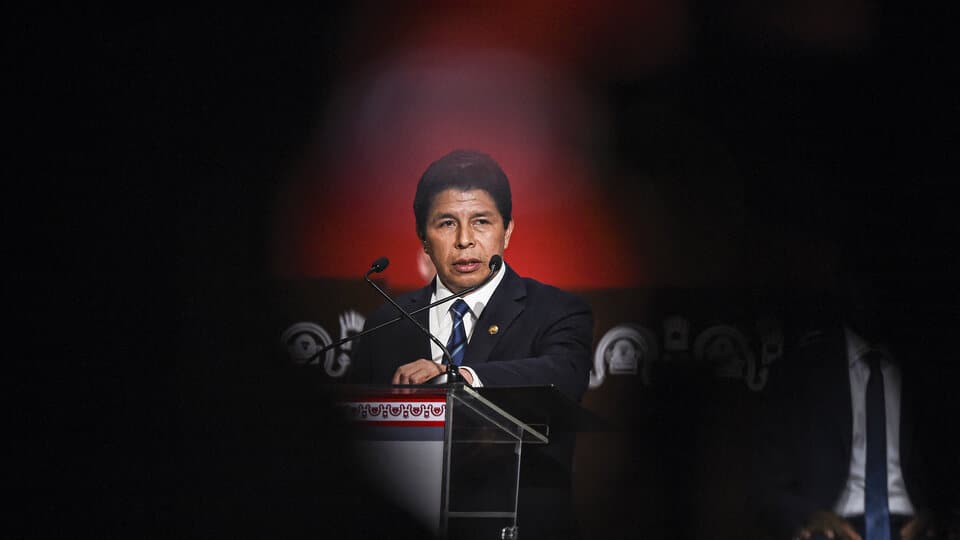 The social upheaval is not taking the name of stopping. Protest mobilization in a good part of the country does not give way. In expression of implicit anger against a discredited political class and long neglected social demands, Civil unrest grows, violence breaks out in various places and six people have been killed so far in the crackdown. while the president Dina Boluaarte called for calm on the protests and announced a possible new election -A few days ago they announced that they are moving from 2026 to the month of April 2024-, in an attempt to stop the popular movement that demands to “quit all”, Jailed ex-president Pedro Castillo appears before a court and condemned His detention is “unreasonable and arbitrary”., He took advantage of this opportunity to demand that the crackdown against the protests be stopped.

this Tuesday, A Supreme Court court rejected Castillo’s appeal against his preliminary detention For his unsuccessful attempt to unconstitutionally shut down Congress seeking to remove him from the presidency. That initial arrest warrant expires this Wednesday. And prosecutors are expected to request preventive detention of the former president on charges of sedition and conspiracy, as the right-wing Congress removed the former president’s immunity early Monday, amid allegations that the right to due process and defense was not respected. went. The ex-president’s defense argued that there was no crime because the Congress had not concluded, there was no written order to that effect, and everything was limited to the speech given by Castillo, which was said in that message. Was done without talking. The lawyer of the former president also indicates the same For the offense of mutiny to materialize, there must be “mutiny in arms” which has not happened in this case.

“I am not imprisoned for a thief”

“I have been detained unjustly and arbitrarily. I am not a thief, rapist, or corrupt, or swindler. But I would like to address the nation to tell you that I thank you for your trust, effort, struggle and recognition. Totally grateful.” , I will never resign and will not leave this popular cause. From here I want to urge the Armed Forces and the National Police to lay down their weapons and stop killing people thirsty for justice. Tomorrow at 1:42 pm I want my people to walk with me. Castillo never pleaded guilty to conspiracy or insurrection from his prison in a virtual court hearing that rejected his appeal against his initial detention. The call to accompany him on Wednesday afternoon was because at that time the initial arrest warrant was complied with and he should be released or, otherwise, placed in pre-trial detention, if before the expiration of that period the court Such order has been given by

Castillo’s dismissal sparked protests, opening the doors to popular unloading. But before endorsing Castillo, Most mobilization calls for Congress to be shut down, that “everybody go away” and that new elections be called. The mobilization does not demand that Castillo be restored to the presidency, although there are mobilization sectors that demand the independence of the former president.

“The great mobilization is not in support of Castillo, to defend him, it is because if Castillo quits, the people want Congress now run by the right to quit. The people do not want Castillo to quit. And the right wingers who are in Congress should stay and take advantage of that. It’s very difficult to defend Castillo for what he did, his coup speech Although it is not a crime because it was just a speech that did not lead to any action, It has taken away the political and moral right to continue to rule. Except for a few, the mobilization is not to replace him in the presidency. but gotta say Castillo is being abused, due process is not being followed and they are accusing him of a crime like rebellion that didn’t exist”, he pointed page 12 Sociologist and university professor Cinécio López.

kept against the ropes by an important popular mobilization, whose most active center is in the Andean regions, but which has also reached the streets of Lima and spread to a good part of the country, The new government has set up a crisis committee for the protests and sent several ministers into the interior of the country to begin talks with the protesters. Roadblocks, attacks on public places, judicial offices, companies, police stations, the airport in the city of Arequipa, and media accused of misinforming the protests continued. Attempts have been made to seize electricity and gas generation plants. Years of abandonment and frustration, a widespread and profound rejection of a political class known for corruption and protecting special interests, are expressed with anger in these mobilisations.

President Boluarte called for calm and announced a possible new election advance, the main claim in these protests. His announcement to push the 2026 elections to April 2024 has not been accepted. That is why he indicated this Tuesday that elections could be held before that date.

“I have said that this government is going to hold talks. From this office of the President, I wish for peace. Please calm down, brothers and sisters. We all have the right to protest but not to vandalize, burn hospitals, ambulances, police stations, seize airports, this is not a normal protest march, it goes to extremes. They say Congress should be shut down, but legally it is difficult, to shut down Congress, see where President Pedro Castillo is now. I have said that we are going to hold the elections ahead of time. The schedule is not managed by me, it is managed by Congress. It was said that elections will be held in 2024, but to reduce that period, I am going to talk to Congress”, said the president, who has had a turbulent first week in government.

Sociologist López points out that the only way out of this crisis that has erupted into popular protests is a new progression of elections, no longer for 2024 but for 2023. “I cannot say whether we are already in the throes of the neoliberal model, which has had 30 years of great contradictions, rifts and tensions, but we are on its edge. If it goes up, as everything indicates, they will have to leave soon, I don’t think it will be possible to reach 2024 without elections, they will have to be in 2023. This is the only way this flood of protests can be stopped. The rules of the electoral system would have to be changed to open up space for groups of citizens to form new parties and run for office. Renewal with the same rules will not be required. The Constituent Assembly that is also demanded in these protests is inevitable, but that will come later,

In the Congress, the Left has announced the intervention of the Home Minister for the deaths in the protests. with six dead The parliamentary and media right wing demand more repression, calling protesters “vandals” and “terrorists”, and demanding retribution against the left.

President boluarte it is ensured He has ordered an end to the repression, that the police are not to use deadly weapons, “Not even rubber pellets”, and police officers to be identified who used weapons against the public Cause of death, to whom, he said, “The entire burden of the law will fall on them.”

The Chicago Bears interview Nathaniel Hackett for a coaching job. Here’s what you need to know about the Green Bay Packers Offensive Coordinator.

Team India: Team India got great news amidst the Windies tour, this deadly fast bowler will return to the team soon

US experts expect more COVID-19 in the coming weeks, but it’s not clear what this means for Colorado