Peru, the language of the street 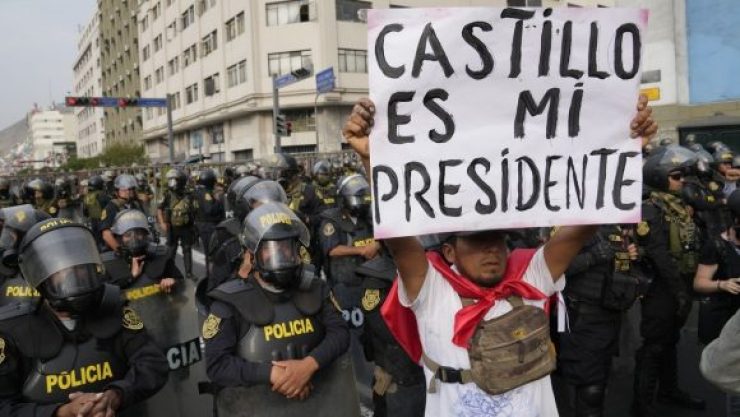 The street in Peru is talking. And he does it loudly. From the furthest and darkest corners of its geography to the megacity of Lima, it calls for the closure of Congress, new general elections, a Constituent Assembly and the release of Pedro Castillo.

Street fighting has a long tradition in the Andean country. On many occasions he has defined important issues. A vast archipelago of popular movements is flourishing, demonstrating on avenues and sidewalks, blocking roads, taking charge of their self-defense in rondas campesinas, and confronting the devastation caused by open-pit mining. Used to be.

The ongoing call for popular insurgency is a result of the political crisis caused by Castillo’s announcement, less than 500 days after assuming the presidency, that his government would temporarily dissolve the Congress of the Republic and install an emergency government. was moving forward. Extraordinary, that he would rule using decree-laws, until the approval of the United States and the Organization of American States (OAS), the establishment of a new Congress, and his almost immediate arrest and replacement by Vice President Dina Boluaart.

It is also the product of an endemic political crisis. In four years, six presidents have ruled Peru (Pedro Pablo Kuczynski, Martín Vizcarra, Manuel Merino, Francisco Sagasti, Pedro Castillo, and Dina Boluarte). The current social emergency stems, in part, from regime fatigue that emerged in 1993 and its expired constitution. Not only is there a perpetual conflict between the Congress and the executive, but there is also a lack of political representation for vast sections of the population.

Historically, the Unitary Union of Education Workers (SUTEP) in Peru has been instrumental in building a left-wing social force that has been on the streets for five decades. Its union members – about 800,000 teachers – are across the region. The invisible fabric of internationalism led Sutep to establish close ties with Mexican teachers in the mid-1970s, who founded the National Coordinator of Education Workers (CNTE) in 1979.

Emerging from Sutepe, Professor Pedro Castillo led a split from that union in 2017 to establish the National Federation of Education Workers of Peru. He later formed the Partido Magisterial y Popular del Peru, as an electoral tool that allowed him to win the presidency.

Castillo, a rural teacher, was born into a farming family. His parents were illiterate. He was never a deputy or a minister. Coming from progressive evangelicalism, as leader of Sutap he led one of the longest and most important strikes of Peruvian education workers in 2017. In 2021, teachers became the backbone of his election campaign, in which he visited communities where political parties do. Don’t go with a giant pencil as a symbol.

In an obviously racist country, the teacher won the presidential election in the second round, the social left, indigenous peoples and social sectors not recognized by the political system. For example, he offered to convene a Constituent Assembly and promote agrarian reform. He defeated the neoliberal kleptocracy led by Keiko Fujimori, who also drew from a significant social base built during the fight against poverty during his father’s dictatorial government.

However, beyond victory in the election, it soon became clear that Castillo won the presidency, but not power. He was left in a minority in Congress, had neither the support of the military nor the judiciary, and had to face the hostility of the press and larger feudal lords. Events happened quickly. Twice the Congress tried to remove him. They did not reach the required 87 votes.

Faced with attacks from the right wing, Castillo distanced himself from them, far from resorting to those who raised him to the presidency. He succumbed to pressure from the right wing and got rid of the best men and women in his cabinet. He brushed aside calls for a Constituent Assembly, early elections, agrarian reforms and the fight against open-pit mining. As if this was not enough, he called on the OAS to mediate his pulse with Congress.

Despite corruption charges against him, he had a 31 percent approval rating at the time of the coup, while Congress’s sympathy was just 9 percent. On 7 December, a new chamber coup was attempted by right-wing legislators, for which they did not have enough votes. However, an unsuccessful call by the president to dissolve the parliament led to his downfall.

The reaction of anyone against the right-wing coup has been impressively vigorous. Deeply Peruvian speak with indefinite strikes, caravans, demonstrations, highway blockades, police headquarters set on fire, occupation of airports, clashes with public force. Popular insurgency is on the march.

What will be the fate of this explosion of the invisible? Could this hasten an early call for elections (not the ridicule announced by Boluaert) and a new constituent? Will a state of emergency be declared? Will she drown in blood and fire? Whatever the outcome, as it happened 151 years ago, when the comuneros of Paris took heaven by storm, the popular uprising that today speaks the language of the street in José Carlos Mariátegui’s homeland deserves our solidarity and support.

Orange County DA: There was nothing wrong with the death of a prisoner in Covid-1