Peru: The repression has already killed 21 people. Two ministers of the government of Dina Boluaarte resigned because of the violence of the state 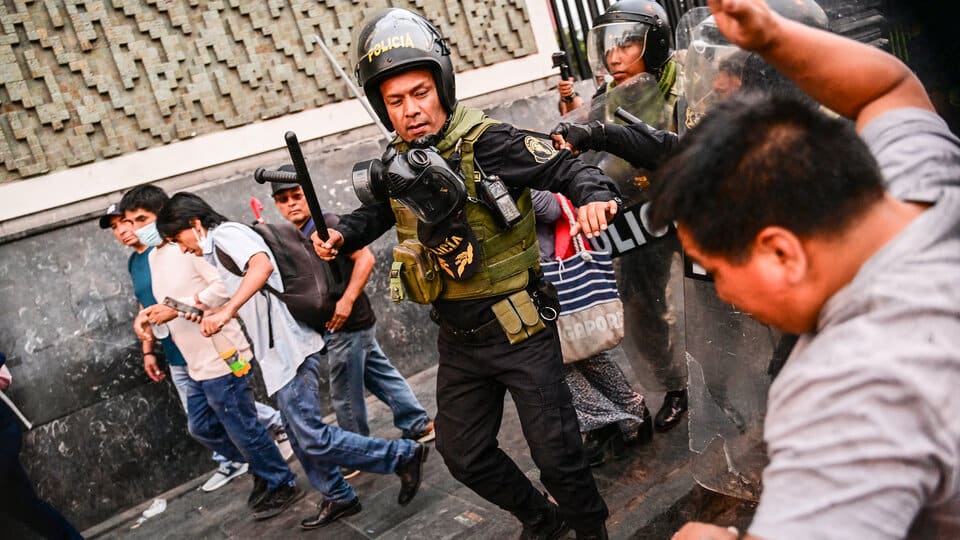 oppression grows Social protests and the president’s newly introduced government weaken in the boulevard, And differences in Congress do not allow the advancement of norms for progress to the general elections, a central demand for the mobilization that paralyzed and shook the country for ten days. To date, the death toll from the repression reaches twenty-one., The country has been militarized and is in a state of emergency, The government has toughened its discourse and backed armed and police forces accused of shooting against the population, a crackdown they have justified by condemning “hooliganism” at the protests. a position, however, not shared by the entire executive. Education Minister, Patricia Correa and Culture Minister, Jair Pérez resigned this Friday In rejection of government repression against social mobilization. Resignations that add to the crisis in an executive demonstrating both repressive rigidity and political weakness.

between repression and death Demands for Boluarte’s resignation are growing, It is a demand that has been added to the demands of the demonstrations to bring the elections forward – the government has proposed bringing them forward to December 2023, which must be approved by Congress, but has sought a nearer date – And Constituent Assembly to replace the constitution that came from the dictatorship of Alberto Fujimori. Some regions are also calling for the release of former President Pedro Castillo, in preventive detention for 18 months accused of insurrection for trying to shut down Congress, but this is a demand for fewer summons than others. Congressmen from Peru Libre (PL), the party that brought Bolluarte to the vice presidency in Castillo’s formula, which he replaced after his dismissal by Congress, demanded Bolluarte’s resignation. Other leftist parties and centrist legislators do the same. The authority supports it.

Boluaarte assured a few days earlier that the army would not take to the streets to confront the protests and publicly ordered an end to the repression, the opposite happened. His government declared a state of emergency throughout the country, imposed a curfew in fifteen provinces, pulled the army out of its barracks, and intensified repression. Boluaarte said in statements to the media that he had ordered that weapons were not to be used against the mob, “not even shotguns with rubber pellets”, but this was not carried out. Not only did these guns with rubber pellets continue to be used, but Weapons with lead bullets have been used against the population raised in protest.

Thursday, the first day of nationwide emergency, has been the most violent ever. That day, in the Andean region of Ayacucho, southeast of Lima, the harshest repression occurred, with eight deaths. Amid strikes demanding early general elections – as in other areas – A peaceful crowd marches through the city center of Huamanga, the capital of Ayacucho, According to officials, a group split up to go to the airport to pick it up and violence broke out there. Police and army opened fire on the crowd, Apart from the eight dead, more than fifty are injured. Poor health services collapsed. Following what happened at the airport, angry protesters set fire to two offices of the prosecutor’s office in Huamanga. It has also been condemned that tear gas was fired from helicopters at protesters in the city centre.

Protests continued in Ayacucho this Friday. A police station and a judicial office were attacked. Security forces once again repressed protesters near the airport. According to the region’s health officials, 90 percent of deaths and injuries in Ayacucho are due to bullet wounds, with the other 10 percent due to gunshot wounds. One piece of information suggests that the security forces opened fire with firearms.

Fed up with historical boycotts and unfulfilled demands and a discredited political class in other regions of the country, social mobilization continues to demand “that they all leave.” The Andean regions are the most numerous, but not the only ones. Protests are also taking place in Lima and the center of the capital has been taken over by security forces. The repression and deaths only fueled the anger that fueled the protests.

After the deaths in Ayacucho, the PL Congressman, Alex Florespresented a constitutional complaint against the defense ministers, Alberto Otarolaand interior, Caesar Cervantesfor suppression. The Office of the Ombudsman condemned the repression and deaths and filed a criminal complaint to investigate these facts. “Bullets have been fired at these people. The state of emergency does not fail to protect the right to life,” the Lokpal said, Iliana Revolr. Governor of Ayacucho, Carlos RuaCondemned the repression and demanded the resignation of Boluaarte.

However, right-wing legislators have supported the two ministers, Inquiry and Fujimorism, launched against the Lokpal for condemning state violence. The armed forces, for their part, issued a statement saying they had been attacked, but did not mention dead and injured residents.

Parliamentary and media right-wing say they regret deaths, but applaud repression in the name of “order” And he does not blame the government or the security forces for these deaths, but the popular organizations that have rallied to support the protests and the Left. Some legislators have also blamed jailed former President Castillo. From the right they accuse the protesters of “vandals” and “terrorists”. There is an allegation that they extend what they see as progressivism. The right wing, with the support of the mainstream media, calls for repression against the entire left wing, blaming it for a “coup against the country”.

Justifying the repression in which more than twenty people have already been killed, Defense Minister Otarola said that “we are in the context of a state of emergency and public order cannot be affected, in this task our armed forces Unconditional support to the forces and the National Police who sacrificed so much in defense of internal order”.

“It has to stop,” agreed the president Boluaarte in a military ceremony, He pointed out against “acts of vandalism”, referring to the deaths during the protests, but omitted to mention reports of the use of weapons against the population by the army and police. “I strongly condemn the acts of barbarism perpetrated by some fanatics using the goodwill of the people in their right of mobilization,” he said in front of a uniformed audience. at a graduation ceremony for army cadets, an institution he described as “fantastic”, He assured that “military and police officers are instructed to protect the integrity and human rights of the protesters.” If that provision actually exists, it is clear that it is not being followed.

He also announced that the government would call on the “Catholic, Christian and Evangelical Churches” to form dialogue tables in each of the regions that are mobilized to hold “dialogues” with the leaders leading these marches, their demands. Listen to and channel them”.

in Lima and some other cities Mobilizations in support of the security forces were organized by the same people who had earlier called for a coup against former President Castillo. Unlike popular protests, he had no problem with repression. Legislators and other far-right characters attended. The mainstream media, which justified the crackdown against popular protests, praised these mobilizations and gave them wide coverage.

HMD Global says it has pulled out of the flagship race