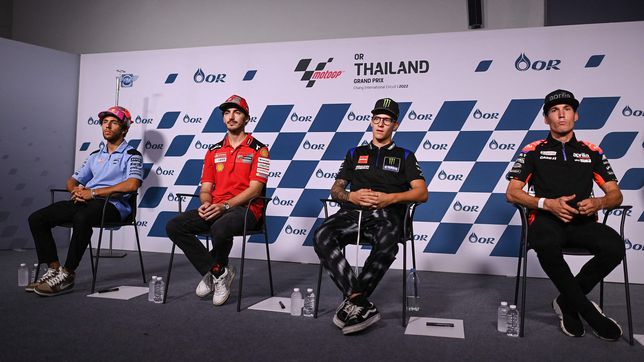 The holy cows of MotoGP, and by him this time the first four of the general plus Marquez have understood that they have shown solidarity with Arón Canet about the disapproval of some teams for having so many tattoos. A discriminatory behavior that Quartaro, Bagania, Alex, Bastianini and Marquez do not share when AS asks them about it. Thai GP. They also know first and foremost that image matters, but you can never discriminate.

Fabio Quartaro: “I don’t know what to say about that. He definitely has a lot of tattoos. I can understand the teams too; I have a lot of tattoos and I know how it goes for certain brands, For which an image without tattoos is important. Some may not care, but I can understand that there are other brands that do. It’s sad, because he’s a super strong rider, and I hope if he’s ready to go to MotoGP, he’ll find a team.”

Francesco Bagnia: “It’s quite strange that this is a problem in 2022. There’s no point in getting multiple tattoos. I find it strange that a team rejects you for getting heavy tattoos. ,

Alex Espagaro: “It’s so sad, but it’s the reality. It’s like denying racism. Racism unfortunately exists and today’s image is very important. He makes a great reflection when he says that he is neither a better nor worse kid than when he was 16 and had no tattoos, but I’m in MotoGP, on a factory team, And I know how the directors of large multinational companies. Whether we like it or not, it affects a lot, although I support it a thousand percent. It pissed me off when Dorna made it a rule to wear long pants at official press conferences… it’s the same thing and stereotypes”.

Enia Bastianini: “I don’t understand. I think Aaron is a very fast driver and I also know that image is important for some factories and he is full of tattoos, but he is a great man. I was his teammate in 2017 and I know he is a great man. This situation is very negative for him and something has to be done for the future, because you have options to go up to MotoGP and with good options.

Mark Marquez: “My opinion is clear and this is what I would recommend to Canet: If you win ten races in Moto2, calm down, no bow ties or tattoos or anything and the teams will love you yes or yes. When the level is … in the end, everything is respectable and the character of the person has to be given a lot of importance, but this is what the game is like and what is most valuable is the result on the track.