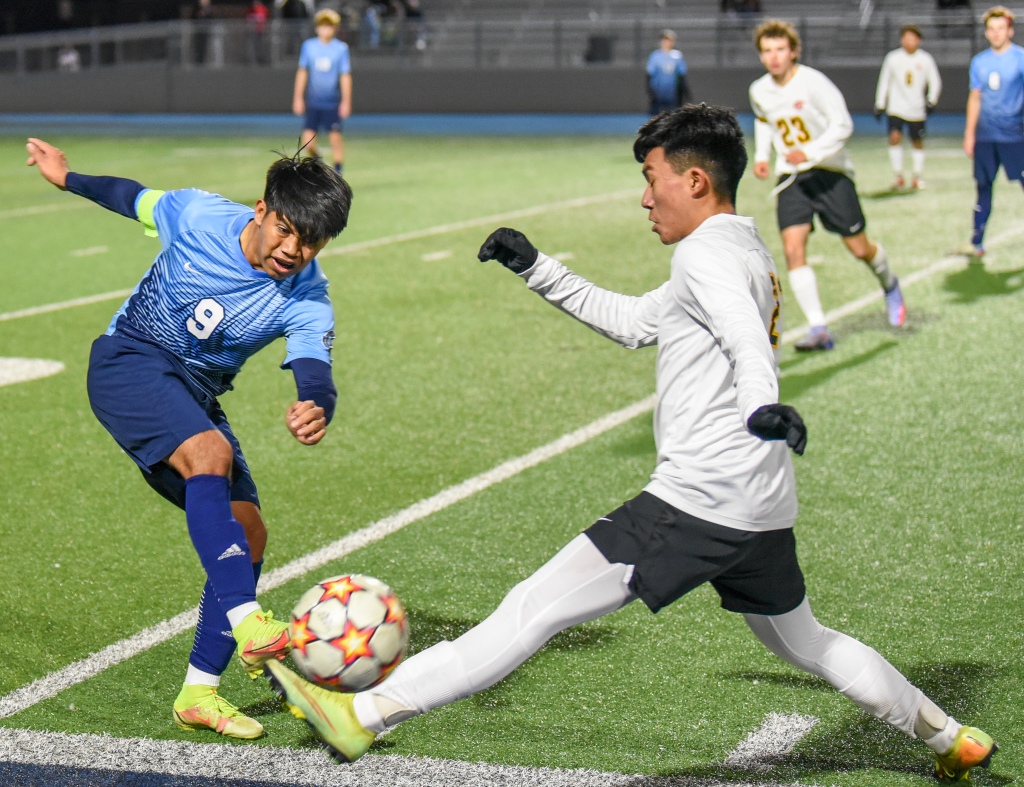 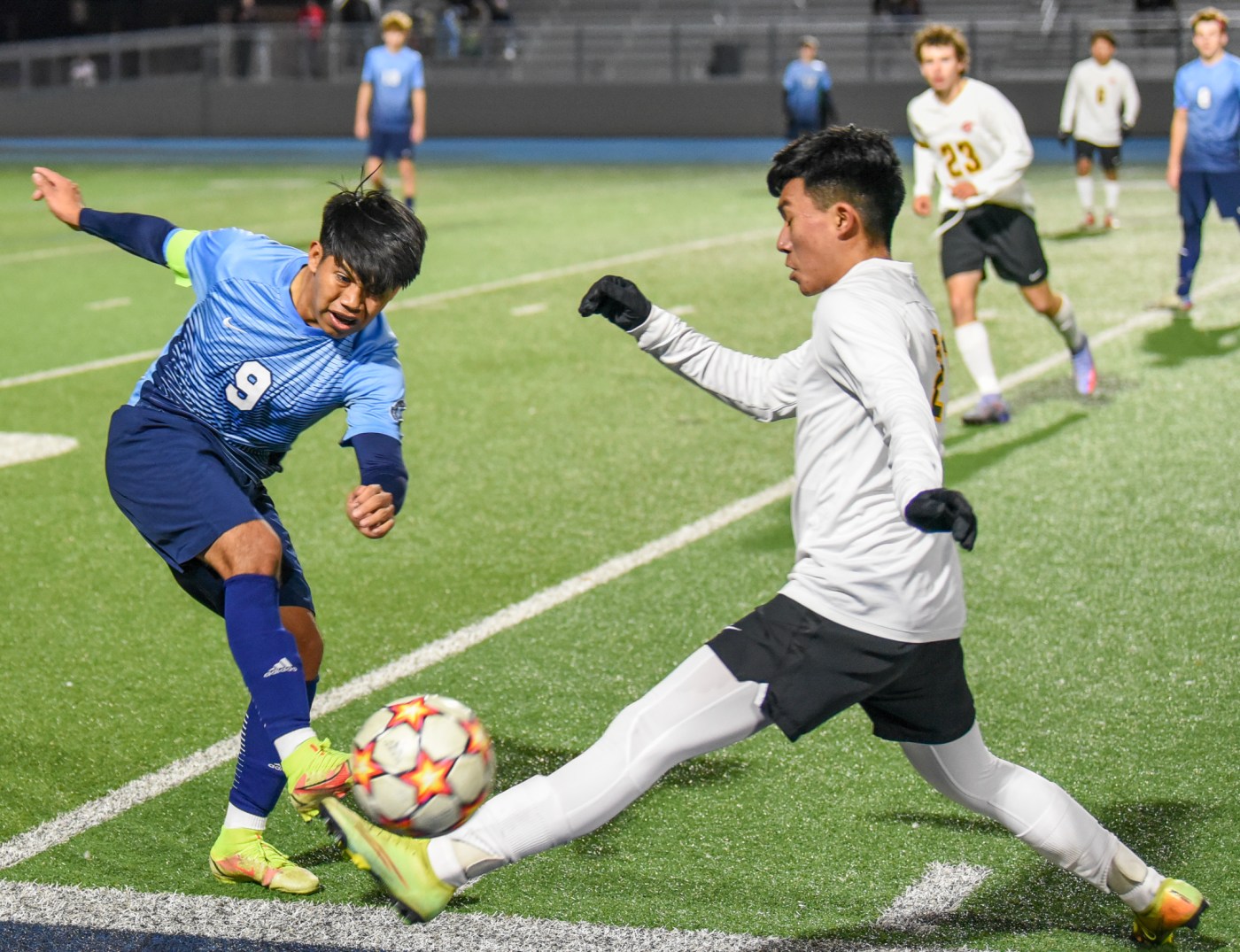 CHICO — With both teams battling COVID-19, the Chico High boys soccer team was without four players on Wednesday in the Panthers’ matchup with Pleasant Valley. All four Panther players absent Wednesday were forwards.

Pleasant Valley was without two players, but the losses on the pitch for the Vikings didn’t seem to factor into Wednesday’s matchup near as much as they did for Chico High offense.

Both teams’ offenses had chances in the opening half, as the two cross-town rivals from Butte County entered a scoreless halftime at 0-0.

In the second half sophomore Keegan McGregor scored on a left-footed shot from 17 yards away just over the head of Chico High goalkeeper Manny Diaz, which ended up being the lone goal in the Vikings’ 1-0 win at home at Asgard Yard.

One of Pleasant Valley’s captains, senior Cameron Powell, said in the first matchup between the two teams PV’s team had some issues with team chemistry. Powell said in the Vikings’ 3-1 win against Shasta on Jan. 26 he felt the chemistry finally clicked.

“These past couple weeks we’ve been working on cohesion and playing together and I think tonight we really came together,” Powell said. “I think really we started bonding. We were up and down but I couldn’t be happier with the team now.”

Pleasant Valley started the game with the ball, and its offense was able to get eight shots against the Chico High goalkeeper Diaz in the opening half. Diaz kept Chico High in the game for much of the game, corralling 19 saves including many diving attempts.

“Manny was great, he had an amazing game. Held us in it,” said Chico High coach Ryan Flenner. “We had a lot of good play out of our defense, we just weren’t able to put our possessions together and it made it really rough on us.”

Chico High’s offense controlled the ball for nearly an even amount in the opening half, but the Panther forwards struggled to get the ball from midfield into an attacking position without forwards Ruben Flores Thomas, Pietro Romanello, Luca Campos and Cesar Moreno. The Panthers finished the first half with just three shots on PV goalkeeper Bryant Bales. In the second half Chico High was only able to get off two shots on Bales.

Flenner said missing the rotation of his four forwards definitely impacted Wednesday’s game, but he did not make any excuses and said other guys must step up and his team looked “gapped.”

“We looked separate with our offense from our defense and we just kept letting them come at us,” Flenner said. “At some point the game will break and it did. The kid made a really nice shot.”

Pleasant Valley got its first shot on goal in the second minute on a shot by Noah Fishkin that Diaz dove for and saved and had several opportunities. Chico High had its best opportunity in the first half with 6:30 left, when Makaio Davis passed to Diego Avalos for a shot, but Bales jumped in the air for the save.

After a scoreless first half, Pleasant Valley’s offense did not let up. With 27:30 left in the second half, Estefano Garcia passed to sophomore Garrett Powell who shot it hard straight ahead off the upper crossbar. Garcia and Fishkin made several runs early on in the second half but were unable to find the back of the net.

With 20:10 left in the second half, Garcia got his chance on a free kick following a Chico High foul, but Diaz dove right and deflected the ball in front of him before he was able to dive on top surrounded by PV attackers. Two minutes later, Garcia was double teamed in the corner and passed to Cameron Powell, who took a shot from straight ahead, but the shot was saved once again by Diaz.

With 12:50 left, McGregor got his chance and right beside the PV bench drilled a long shot that finally beat Diaz.

After the referee added on two minutes of extra time, PV nearly made it a 2-0 game but a second shot deflected off the crossbar, but the Vikings were able to hold on for the win.

“I’m so happy for him. He’s a sophomore, it’s a big game for him, it’s his second playing Chico High at the varsity level and scoring a big goal like this is a big deal,” Powell said. “And I think we were there. We had 14 or 15 shots and Manny is just a beast. I think it was just a great goal by him.”

Chico High will face Enterprise at 6 pm Friday at home, before concluding its regular season at 7 pm Wednesday at home against Shasta.

PV plays at 7 pm Friday at home against Red Bluff, before concluding its regular season at 6 pm Wednesday at Enterprise.