Poland confirms missile that fell on its territory is Russian 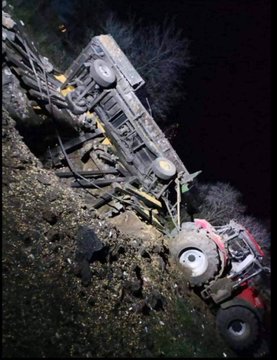 NATO called an emergency meeting on Wednesday for this.

The Polish Foreign Ministry said on Wednesday that a Russian-made missile landed in the eastern part of the country, killing two people.

“At 15:40 (local time) in the city of Przewodow, in Hrubiszów, (…) a Russian-made missile fell, killing two citizens of the Republic of Poland,” ministry spokesman Lukasz Jasina said in a statement. . Statement. ,

The statement did not specify the type of missile or where it was fired from.

Moments later, the President of Poland, Andrzej Duda, clarified in a speech that it was not known who launched the missile that exploded, although he insisted that it was “probably made in Russia”.

“We are acting calmly and very soberly,” Duda said during a speech at the National Security Office in Warsaw, urging calm and reassuring the country of the support of NATO allies.

Duda said the United States is sending experts to investigate the scene and that the investigation will be a joint operation.

The President reiterated that Poland has raised the alert status of its military.

Hours earlier, Polish media reported that shells fell on a farm on the territory of NATO member Poland, around the same time as Russia launched its biggest wave of missile attacks on Ukrainian cities in more than a month.

NATO Secretary-General Jens Stoltenberg will chair an emergency meeting of the alliance’s ambassadors in Brussels on Wednesday morning to discuss “this tragic event,” spokeswoman Oana Lungescu told CNN on Tuesday.

“There was an explosion in eastern Poland,” government spokesman Piotr Müller said during a brief press conference in Warsaw. And he said there are teams of experts who are looking into the situation and will be working through the night to clarify the details of what he called a “serious situation”.

He also said that the country is increasing the combat readiness of some units.

Who will the Chicago Bears hire? Here’s what you need to know about finding a coach and GM, including the latest interview listings.