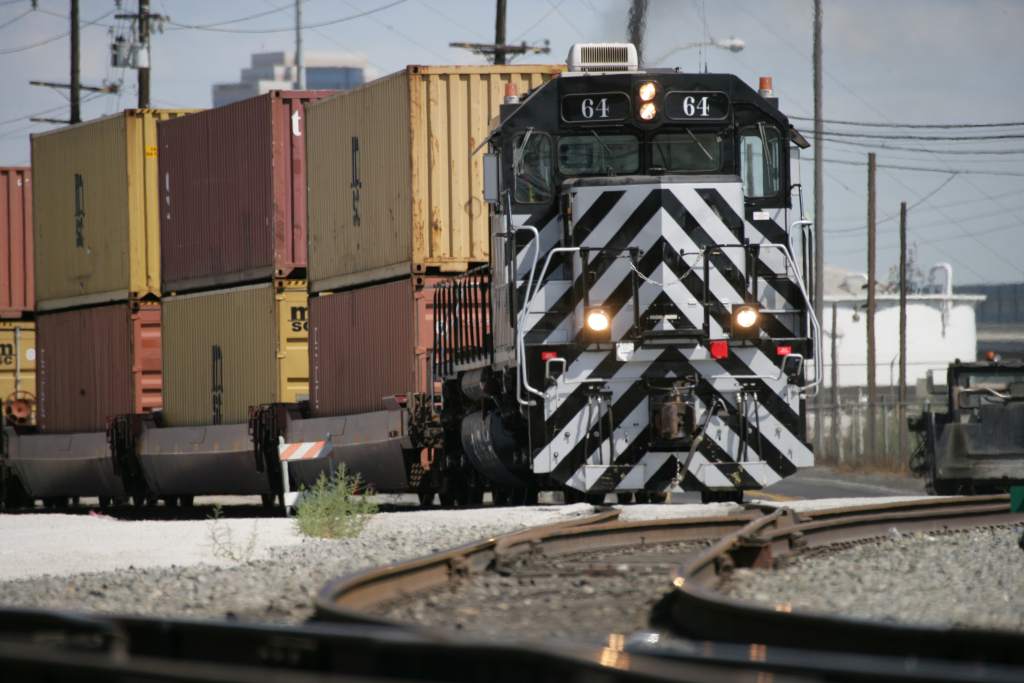 A centerpiece project designed to expand on-dock rail for greater efficiency at the Port of Long Beach is set to reach property owners within the project’s footprint with proposals for relocation.

Port officials said they are optimistic that the process – which could involve around 40 parties, though it could be as few as 20 – will end within a period of 90 days.

The project, which will expand an exit rail yard from 12 tracks to 48 tracks along Pier B Street, has been on the drawing board for some two decades.

Officials have said that when finished, sometime in 2032, it will not only increase efficiency and competitiveness but also cut the port’s carbon footprint by reducing traffic. Each train is expected to cut the 750 truck trips otherwise required to transport unloaded cargo to downtown LA and near or off-dock rail yards.

Instead the cargo will be loaded directly into trains at the country’s second busiest port. Five of the new tracks will be two miles longer to accommodate longer trains.

With the project now approved through the national environmental review process, more federal funding is expected.

But there are also local decisions that officials must make before the port breaks down if it is envisioned as a high-tech, on-dock rail facility. For example, the work would include reconfiguring city streets for better traffic flow and utility placement.

And further negotiations will be held with property owners right in line for relocation or other mitigation within the project’s footprint in the northern part of the Port of Long Beach.

Port officials laid out those plans at a quarterly virtual update meeting on the project on Wednesday, June 15.

Businesses that can be relocated include industrial, boat-related and other types of operations. Some need to be near the port but others do not. The properties include both port-owned and privately owned parcels.

Affected properties are typically south of 12th Street between Harbor and Fashion Avenues and west of Canal Street, south of 11th Street.

Port officials said the notices would be out on Friday, June 17 or early next week.

Port staff said the project would also partially extend to neighboring Wilmington, but no property relocation is expected there.

“We do not expect any significant avenue challenges in Wilmington,” Port Deputy Chief Harbor Engineer Mark Erickson said in a phone interview Thursday.

“They are looking for us to be a good partner,” Eriksson said. “What we generally hear from Wilmington is that there are a lot of challenges and they are looking to the port to be part of that solution.”

The first five phases of the Pier B project are to be constructed from 2023 to 26.

Meanwhile, Long Beach consulting firm Overland Pacific & Cutler has been hired by the port to assist with the right-of-way program.

Property owners will first be informed that the port intends to evaluate their property in order to make an offer. After a written proposal is submitted, the property owner has 90 days to consider the response. If that first offer is not accepted, port officials said, the coveted domain would come into play.

He added that in-depth interviews will be part of the process.

One property owner, Lee Wilson, warned port officials at Wednesday’s meeting that there may not be an easy road ahead of the port.

“We will never sell our property, unless our tenant is taken care of, we will litigate,” he said, noting that two families have been involved in the operation of LAN logistics for four generations, one Import-Export Company, at 1520 W. 11th St., in Long Beach.

“My father charged me with a patriotic duty to ensure that we would protect that relationship and I would do so to the best of my ability,” Wilson said. “Our tenant will be part and parcel of the negotiations. I just want to tell you what you are up against.”

Eriksson later stated that Wilson had been working with the port for some time and that both sides maintain “an open line of communication”.

“He has been a very vocal property owner and has a port-related warehouse in the area,” Erickson said. “We have met the team at LAN Logistics and have an open line of communication, so we are cautiously optimistic and we understand the challenge.”