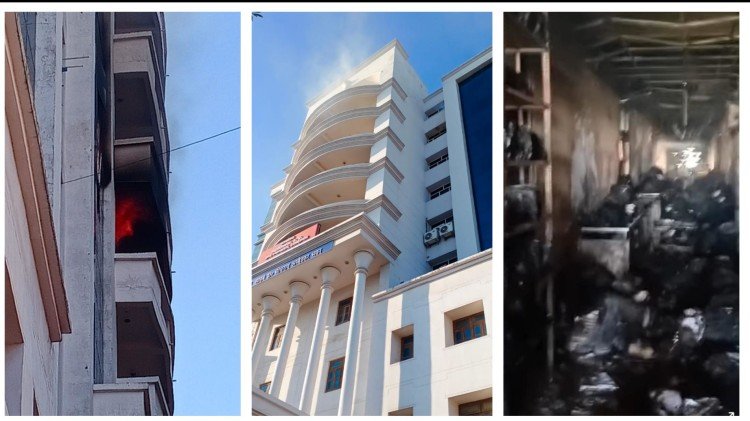 A massive fire broke out in the Advocate General’s office in front of the Allahabad High Court on Sunday. In this, about one lakh files kept there were burnt to ashes. These files contained documents related to pending cases in the High Court. The fire was so frightening that it took morning to evening to control it. The magnitude of the incident is known from the fact that the fire brigade was able to completely control the fire which broke out at 5.30 am. The cause of the fire could not be ascertained. On the other hand, some fire brigade personnel were also injured during the relief work.

The office of the Advocate General, Uttar Pradesh is located in the nine-storey Dr. Bhimrao Ambedkar Bhawan, located right in front of the High Court in Civil Lines. At around 5.30 am, a passerby Deepak Dubey, passing near the High Court, saw smoke coming out of the building and informed the guard. The guard gave information on number 100 along with an employee of the office, on which the fire brigade reached. When firemen reached inside, it was found that the fire started on the sixth floor. They tried to go there but could not proceed due to the smoke.

On the other hand, the fire was spreading and within a short time the files kept on the fifth floor came under its grip, due to which the flames started rising. Firefighters tried to douse the fire with water cannons but failed due to the high altitude. Water was also thrown from a multi-storey building adjacent to it as well as from the overbridge but to no avail. After this a crane was called and then water cannons were released inside, but on seeing the fire spread to the seventh, eighth and ninth floors.

After this, fire tenders of Army, Air Force and NTPC were also called along with fire brigade. Each of which required dozens of rounds. After a lot of effort, the fire was completely brought under control around 7 o’clock in the evening. But by then about one lakh files kept here had been burnt to ashes. All the officers including DG Fire Service Avinash Chandra, ADG Prem Prakash, IG Dr. Rakesh Singh were present on the occasion.

The files in these sections were burnt

Files of several important sections were burnt in the fire that broke out in the Advocate General’s office. These include Contempt, Bail, Criminal Appeal, Criminal Revision and Civil Section. In fact, there are offices and officers’ chambers up to the bottom five floors. After this, the sixth to eighth floors are used as record rooms. In one part of the ninth floor, some files were kept in the conference room as well as in other places.

On the other hand, taking this matter very seriously, Chief Minister Yogi Adityanath has constituted a five-member committee and ordered an inquiry. In this, SP City, ADM City, Chief Fire Officer, Additional LR Prayagraj and Deputy Director Electrical Safety have been included. The committee has been directed to investigate the cause of fire under the guidance of DM and SSP and send a report. So that after fixing the responsibility, action can be taken against the guilty.

Roofs cracked, walls cracked
The building of the Advocate General’s office has also suffered a lot due to being engulfed in flames for hours. The situation was that the roofs from the sixth to the ninth floor got stuck in many places. Also there were cracks on the walls. Furniture worth lakhs of rupees kept here also got burnt to ashes. The situation was that even after the fire was extinguished, the walls continued to blaze. It is being said that there has been a loss of crores in the incident.

No casualties have occurred. Some firemen suffered hand injuries while breaking the glass panes for ventilation, on which they have been sent to the hospital for treatment. How the fire started is being investigated. – Dr. Rajeev Pandey, CFO

How should we read Dostoevsky and Tolstoy during Russia’s war against Ukraine?