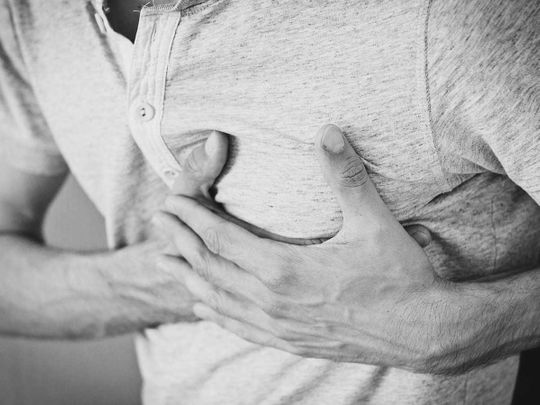 Do you know the risk of heart attack? Many people don’t know — or don’t care to know — their risk “score.”

But this type of risk score system is being used for some time now. In general, this establishes the overall risk of heart disease. These tools include: cholesterol testing, blood pressure, lifestyle factors (do you exercise 150 minutes a week?), family history, and other conditions such as diabetes.

But can you predict when someone might have a heart attack with more accuracy?

It turns out that this may now be possible. A new test using artificial intelligence (AI) that analyzes a host of proteins in the blood has been developed that promises much higher accuracy in predicting cardiovascular “events” than you might encounter. Huh.

Compared to the existing “risk score” system, the protein-based analyzer claims 60% accuracy in predicting heart attack risk within a period of 4 years – 48 months.

One person dies of heart disease every 36 seconds in the US.

This is known as the “protein model”. The method uses at least 27 proteins found in the blood. This is important: according to experts, this number is about a quarter of all the proteins encoded by our genes.

This method has only been possible in the current era, thanks to emerging new technologies and fast computing power, which allow specialists to measure thousands of blood proteins to assess patients’ individual risk.

Researchers led by Dr. Stephen Williams based in Colorado developed the test and published their work science translation therapy Journal on 6 April 2022.

Dr Williams, chief medical officer of US-based Somalogic, specializes in the development of translational medicine and diagnostics and management of the clinical assay laboratory. The team enlisted 22 experts from different medical disciplines from different parts of the world to collaborate in developing the test.

SomaLogic’s test uses protein measurements to classify people at “high” to “low” risk — as well as providing a percentage chance that they will suffer a cardiovascular event within the next four years.

It uses AI to develop predictive models. An algorithm was developed to determine the risk.

How many blood samples were used to test its accuracy?

To test the accuracy of this protein method, 32,130 “stored” plasma (an amber-colored liquid in the blood) samples from 22,849 participants in nine clinical studies were used, according to the journal.

Using machine-learning, Williams’ team analyzed 5,000 proteins in blood plasma samples from 22,849 people. And so they identified the signature of 27 proteins that can predict the likelihood of heart attack, stroke, heart failure or death over a period of 48 months.

What is the role of blood proteins in predicting heart attack?

In general, heart disease (or cardiovascular risk factors) activate several pro-oxidative genes in the blood vessel (vascular) wall. This results in the generation of reactive oxygen species, particularly those produced by the endothelium (a thin membrane that lines the inside of the heart and blood vessels).

What is the role of the endothelium in the production of these proteins?

In medical science, it is a known fact that endothelial cells release substances that control vascular relaxation and contraction – as well as enzymes that control blood clotting, immune function, and platelet (a colorless substance in the blood) adhesion .

I think this is the new frontier of personalized medicine, to be able to answer the question, does this person need advanced treatment? And when you’ve treated someone, does it really work?

These genes also induce a complex cascade of events that underlie the transition from normal endothelial function to dysfunction. The result: abnormal heart activity, development of a pro-coagulant endothelial surface, inflammation, and, eventually, plaque buildup that progressively blocks the flow of oxygen-rich blood to the heart, which can eventually lead to a heart attack.

What is the significance of this new test?

Globally, heart disease is the leading cause of death – one in three – as well as disability.

Despite the development of lipid-lowering, anti-inflammatory, antithrombotic, dual antiplatelet and anti-diabetic treatments, the risk is increasing in both developed and developing countries.

A 2012 study published in the journal JAMA predicts that the risk of developing heart disease is on average more than 40% and more than 30% in women.

“I think this is the new frontier of personalized medicine, to be able to answer the question, does this person need advanced treatment? And when you’ve treated someone, does it really work? is?” Research leader Dr Williams said.

But can you really predict when a heart attack will occur?

According to Dr. Sutter Zi-Jian Xu, a cardiologist at the Sutter Health Network, people may notice subtle heart attack symptoms months before the actual event occurs.

The current risk score system – the most widely used in the world – considers a person’s age, gender, race, medical history, cholesterol and blood pressure to assess their likelihood of having a cardiovascular event.

The new 27-protein model takes this scoring method to a higher pitch.

When its predictive ability was validated against 11,609 individual cases, the researchers found that their model was “twice as good” as the current heart disease risk “score.”

The new trial was also able to accurately assess risk in people who have had a heart attack or stroke, or have additional diseases, and are taking medications to reduce their risk. This is where existing risk prediction scores fall short.

Where is “60% accuracy” derived from?

Overall, the researchers said that in their study, less than a quarter of those who tested positive had a heart attack—the equivalent of a positive predictive value of 22% (over a 95% confidence interval).

However, the test accurately identified almost all patients who died within 30 days or had a major cardiovascular adverse event – ​​equivalent to a sensitivity of 98.0%.

What is the benefit of protein testing?

In general, genetic tests can provide an idea about the risk of certain diseases based on a person’s genetic profile. William’s team explained that protein model testing differs from genetic tests in that protein analysis provides a more accurate snapshot of what one’s organs, tissues and cells are doing at any given time.

Heart disease is the leading cause of death in America for men, women, and people of most racial and ethnic groups.

One person dies every 36 seconds from heart disease in the United States.

How much is this test? When can I get it?

The test is already being used in four health systems within the US. The price of the test is not immediately available.

Professor Manuel Meyer, British Heart Foundation’s Professor of Cardiovascular Proteomics at King’s College London, said: “Proteins are the building blocks of our bodies. While this study uncovers new links between proteins in the blood and death from all causes, the risk of cardiovascular disease has been increased. More research is needed to assess the potential clinical impact of using these 27 proteins in comparison to existing risk prediction tools for cancer.