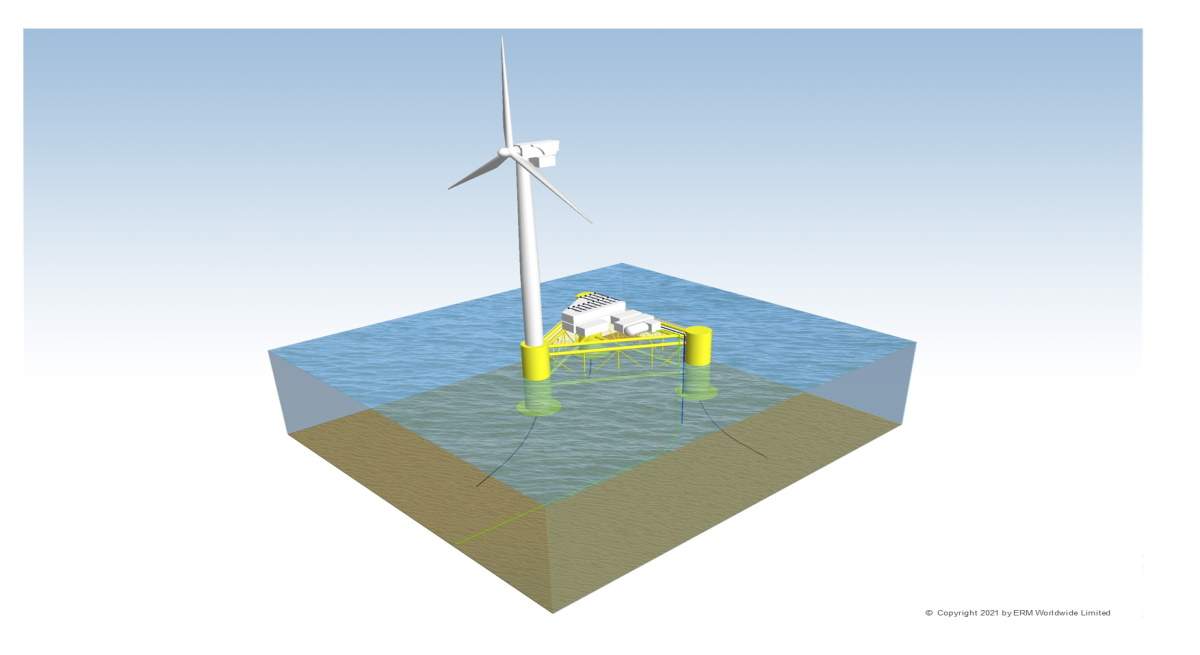 Principal Power has been contracted by ERM to carry out the Front End Engineering Design (FEED) of a 10 MW wind-to-hydrogen demonstration project off the coast of Aberdeen. The contract was signed after ERM Dolphins received 8.62 million pounds (10 million euros) of funding from the British government through the Low Carbon Hydrogen Supply 2 tender.

ERM Dolphin (Deepwater Offshore Local Production of Hydrogen) has developed a conceptual design for large-scale green hydrogen production from floating offshore wind power. Dolphin ERM Concept Employs a modular design that integrates electrolysis and a wind turbine on an anchored semi-submersible floating platform, is based on Principal Power’s proven Windfloat technology to produce hydrogen from seawater, using wind power as the power source. ERM and Principal Power have been collaborating since 2019 to develop opportunities for decentralized hydrogen production.

“It is now established that in order to meet net zero ambitions in the UK and around the world, Hydrogen from floating offshore wind power should be a critical component in any viable long-term solution for heat, power generation and transportation, ERM’s Dolphin project, the first of its kind, is an innovative integrated system that combines all the technologies needed to bring together the latest floating wind and hydrogen production technologies for offshore wind resources to contribute to large-scale hydrogen production . Principal Power has played a key role in this process, and we are pleased to expand our collaboration,” said David Kane, Partner at ERM.

The 10 MW demonstration project is an important step in proving the concept of Dolphin prior to its commercial scale deployment. The demonstration project is due to go online in late 2025. Commercial Scale Projects (More than 300 MW) are under development and expected to be operational before 2030After full scale deployment after 2030. When fully deployed, with a total capacity of 4 GW, the ERM Dolphins have the potential to supply energy to heat more than 1.5 million homes without carbon emissions, thus avoiding emissions of millions of tons . The amount of CO2 in the atmosphere each year.

ERM Dolphins is a core project for the UK Hydrogen Coast Strategy, and It is expected to contribute to the creation of over 10,000 new jobs by 2030 and over 100,000 by 2050, Many of these jobs will rely on the world-class skills and knowledge found in the offshore oil and gas and renewable energy sectors.

This huge opportunity is not without its challenges: rapidly scaling up floating offshore wind power to meet the energy transformation goals of governments and markets alike requires massive investments in the supply chain. A healthy supply chain from inception is essential to take a holistic view of the challenges of each project and achieve the desired cost reduction that will bring LCOE floating offshore wind at par with other forms of power generation.

“We are pleased to continue collaborating with ERM for years on the Dolphin project, and We look forward to further developing partnerships in the supply chain that supports floating offshore wind applications to support and accelerate growth in the UK and around the world., Moving into the feed phase of the Dolphin project is an important milestone towards our collective carbon-neutral future,” said Gregory-Campbell Smith, Senior Director Europe Business Development at Principal Power.

On the other hand, reaching service scale requires advances in modernization and industrialization, for which Principal Power learns from its 15 years of experience and pre-commercial projects such as Windfloat Atlantic (25 MW, Portugal) and KOWL (50 MW). Taking advantage of the lessons learned. UK) to streamline everything from design concept to manufacturing, installation and charging.