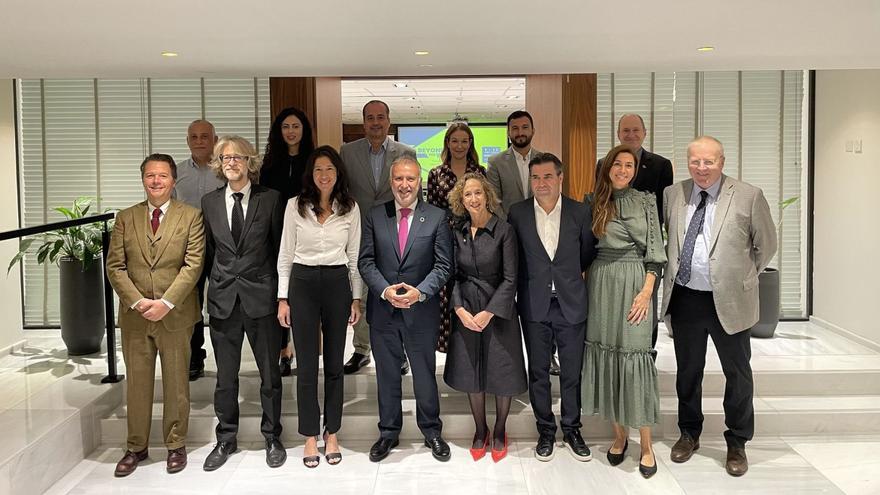 The institutional agenda of the Canary Islands in the United Kingdom these days is not limited to the World Travel Market, an annual macro-fair for the tourism business. London is also the city chosen for the implementation of Beyond the Wharf, an ambitious strategy that has the dual objective of attracting foreign investment and reactivating the historic and fruitful commercial ties between the islands and the United Kingdom. Designed by the public company ProExca, the autonomous entity in charge of the promotion and internationalization of the regional economy, Beyond the Wharf eventually became a world tourist destination, the archipelago known in the United Kingdom after Brexit. Power, that is, because of the incentives of the economic and financial system unique with any other tax structure in the European Union or because of investment possibilities in sectors, for example, the audiovisual sector.

The United Kingdom is the main fishing ground for tourists in the autonomous community. Most of the foreigners who spend their holidays here come to the Canary Islands from London, Edinburgh, Cardiff and Belfast. Its importance to the first regional industry is thus paramount, and it is even greater on islands such as Tenerife, where the percentage of the British to the total number of foreign tourists is also higher than that of the rest of the archipelago. However, the historic commercial ties between the two island territories have deteriorated since the entry into force of Brexit on January 31, 2020, i.e. the United Kingdom’s goodbye to the European Union (EU). Furthermore, London has been no exception to the Canary Islands’ historical difficulties in attracting the attention of foreign investors. In fact, the sum of all British capital invested in the Autonomous Community over the past decade – especially from 2011 to the middle of this year – barely exceeds 89 million euros, even for regions such as the Canary Islands. very small amount. , is not the first place that comes to the mind of potential investors when investing their money. However, it should be pointed out that although there is still a long way to go, it is no less true that the Canary Islands have everything needed to successfully conclude this common path with the United Kingdom, and that ProX is following along with Beyond the Wharf.

According to central government data, between January 1, 2011 and June 30, 2022, British capital investment in the Canary Islands barely exceeded 89 million euros.

As of 31 August, Canarian companies exported products and goods to the United Kingdom for just over €18 million, significantly less than in ‘pre-Brexit’ years.

The islands have imported goods worth just over 49 million from the United Kingdom so far this year, according to the latest official figures, which is less than the ‘pre-Brexit’ figures.

The Hotel Melia at the White House, London, was yesterday the venue chosen for the presentation of the company’s new strategy based on the Ministry of Economy, Knowledge and Employment, directed by Elena Menez. The President of the Government of the Canary Islands, ngel Victor Torres, accompanied by the Deputy Minister of Industry, Justo Artilles and the Manager of ProExca, Dásil Dominguez Reyes, at an event in which he emphasized that the archipelago is and will remain, of course, a first-order tourist destination, but which also has “a renewed economy, more modern, creative, competitive and full of business opportunities”. It will be between today and tomorrow when the companies participating in these London conferences will learn firsthand about all these business opportunities.

Notably, today businessmen will be welcomed at Canary Wharf, a point of great symbolic importance in trade relations between the region and the United Kingdom. Not in vain, in Canary Wharf—London’s port area—all tons of fruit and vegetable products that the islands exported to Great Britain and Northern Ireland were unloaded. From the Canary Wharf comes the name of ProExca’s new strategy, which means Beyond the Wharf literally beyond the dock and it somehow serves to illustrate that the present-day Canary Islands have the potential to come out of their ports. There is a lot in comparison. “This suggests very clearly that our islands have changed and updated their way of dealing commercially with the outside world, and now they go beyond the docks,” deepened the chairman of the regional executive .

Data provided to this newspaper by the Secretary of State for Trade shows how relations with the United Kingdom have deteriorated after Brexit, and show commercial flows as one of the two main objectives of ProExca’s strategy. Why reinstatement? In 2019, prior to the divorce between London and Brussels, British and Canarian companies moved products and goods for an amount of more than 242 million euros, an amount that was reduced to less than half in 2021 – about 103 million – and that is barely over 67 million euros as of August 31, 2022. It will be tomorrow, in the morning, when ProExca will focus on companies in the agri-food sector – tomatoes and cucumbers have been one of the main products shipped from the archipelago to the British Isles in recent pre-Brexit years – and will contact exporters here. with distributor and importer from there.

In the afternoon it will be the investors’ turn. On the one hand, Pilar Moreno, Director of the Foreign Investment Attraction Zone of ProExca, and Pablo Hernández, President of the Canary Islands Special Zone (ZEC) Consortium, will delve into one of the region’s REF incentives for the audiovisual industry. Which field offers more opportunities. Moreno and Hernandez’s exhibition will be followed by a meeting between Canarian and British campaigners and producers. In addition, representatives of Proexca and the President of ZEC—ZEC—one of the most powerful incentives in the regional jurisdiction—will also participate in the third of forums oriented to innovation and new technologies in this case and, therefore, to startups. It is about showing the opportunities – from tax to quality of life – that the archipelago offers to entrepreneurs, businessmen and investors.

22% more jobs in the audio-visual industry

The President of the Government of the Canary Islands, ngel Victor Torres, at the presentation of ProExca’s new commercial and investment strategy in London yesterday, highlighted that between 2019 and this year the employment generated by audiovisual productions in the islands “shows a 22% increase” “Promoting economic diversification.” «With more productions that want to shoot in the Canary Islands because we have eight spectacular natural sets, more light than anyone else and can recreate deserts, Amazon forests or stately homes. There are spaces to offer, in which the tax exemption is forever set at 80%. » , deepened the head of the regional executive. The importance of ProExca’s strategy to showcase the success stories that have taken place in the Canary Islands over the years. Likewise, the financial and strategic benefits proposed by the archipelago and its potential for developing projects related to the sustainable production of high-quality food will be presented a flourishing with audio-visual industry with modern infrastructure and qualified personnel; And with innovation, digitization and startup projects. , LP/DLP