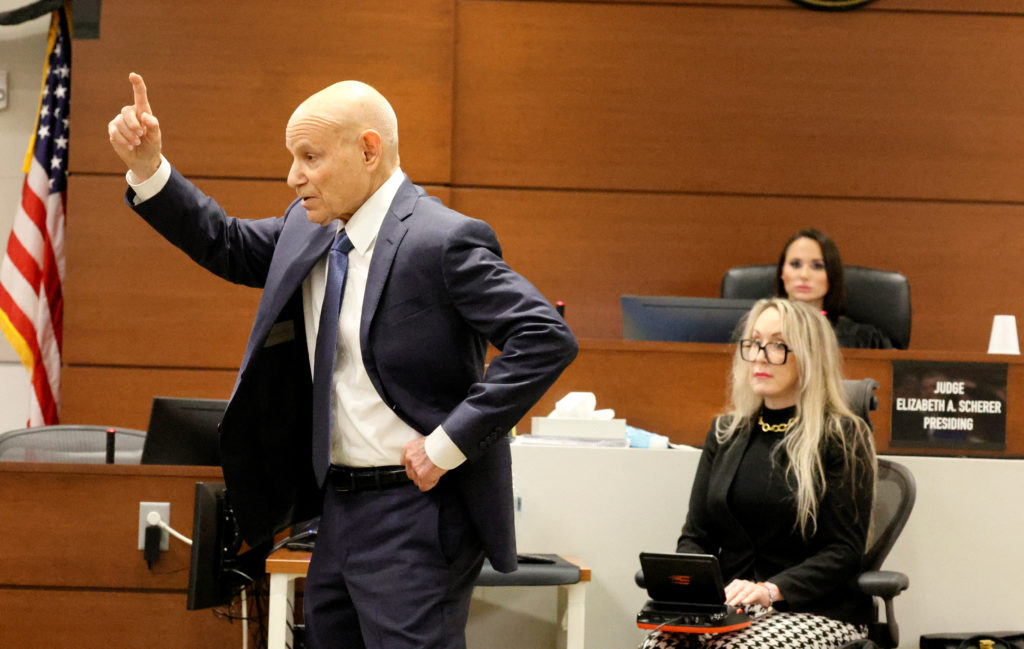 Fort Lauderdale, Fla. ( Associated Press) — Prosecutors seeking the death penalty for the gunman who killed 17 people at a Parkland, Florida, high school, detailed to jurors Monday how Nicolas Cruz coldly crushed his victims Some returned because they were injured, to finish them off with another volley.

Some parents cry as prosecutor Mike Satz describes in his opening statement how Cruise killed his children at Marjorie Stoneman Douglas High School on February 14, 2018. Others remained seated, their arms crossed over their chests. A woman who had lost her daughter fled the courtroom crying and with tissues on her face.

Satz’s remarks came at the start of the trial to determine whether Cruz is executed or serves life in prison without parole.

The prosecutor’s presentation described how Cruz shot each of the 14 students and three staff members, and injured some of the 17. Some were shot while sitting at their desks, some while on the run and others with blood on the floor, while Cruz systematically chased the three-story building for nearly seven minutes with an AR-15 semi-automatic rifle .

Cruz, 23, pleaded guilty to murder and attempted murder in October and is only fighting his sentence. The trial, which is expected to last four months, was scheduled to begin in 2020, but was delayed due to the COVID-19 pandemic and legal battles.

Read more: Survivors of the 2018 attack at Parkland school talk about the recent mass shootings

Saitz described the killings as cold, calculated, brutal and heinous, citing the video Cruz, then 19, made three days before the shooting.

“This is what the defendant said: ‘Hi, my name is Nick. I’m going to be the next school shooter of 2018. My target is at least 20 people with AR-15s and some tracer rounds. This is going to be a big incident. And when you see me in the news, you’ll know who I am. You’re all gonna die. Ah yeah, I can’t wait,'” said Satz.

Among the first witnesses was Daniel Gilbert, a junior who was in psychology class when the shooting began. The teacher asked the students to go behind their desk.

“We sat like sitting ducks. We had no way to protect ourselves,” said Gilbert, who is now a student at the University of Central Florida. He said that four people were shot in that room, in which one died.

Cellphone video clips of Gilbert were taken from inside the classroom, shown to the jury, and the audio included several gunshots as the fire alarm sounded. An injured boy can be heard crying out, “Somebody help me.”

As Gilbert left, she sobbed and wept. Her father put his hand around her and took her away from the court room.

Prosecutors also submitted cellphone video of another student showing classmates lying on the back of chairs as Cruz fired from the window of the classroom door, exploding to screams. A woman in the back of the courtroom shouted at prosecutors to shut it down, before bailiffs told her to shut up.

A seven-man, five-female jury is supported by 10 electives. It is the nation’s deadliest mass shooting to go before a jury.

Nine other gunmen, who killed at least 17 people, either committed suicide or were killed by police bullets, during or shortly after their shootings. A suspect in the 2019 murder of 23 people at a Walmart in El Paso, Texas, awaits trial.

It was unclear if anyone was in the courtroom to support Cruz, who was seated at the defense table among his lawyers. He mostly looked down at a pad of paper with a pencil in hand, but he could not seem to write. He would occasionally stare at Satz or the jury, gaze at the audience, or whisper to his lawyers.

After Satz spoke, Cruz’s lawyers announced that they would not make their opening statement until now was the time to present their case. This is a rare and risky tactic because it gives jurors the sole authority to examine serious evidence and hear testimony from survivors and victims’ parents and spouses before proceeding.

When lead defender Melissa McNeil makes her statement, she will emphasize that Cruz is a young adult with lifelong emotional and psychological problems who reportedly suffered from fetal alcohol syndrome and abuse.

This is the first death penalty trial for Circuit Judge Elizabeth Sherer. When the jurors finally have the case dropped, they will vote 17 times for each of the victims on whether to recommend the death penalty.

Every vote must be unanimous. A unanimous vote for either of the victims means that Cruz’s sentence would be life imprisonment for that person. Jurors are told that in order to vote in favor of the death penalty, the grave circumstances presented by the prosecution for the victim under consideration must, in their judgment, outweigh the mitigating factors presented by the defense.

‘He was 50 years old and going at eight’: Stewart Copeland on Taylor Hawkins’ Childlike Joy