Protecting olive crops from drought is possible thanks to a traditional technique: a sponge 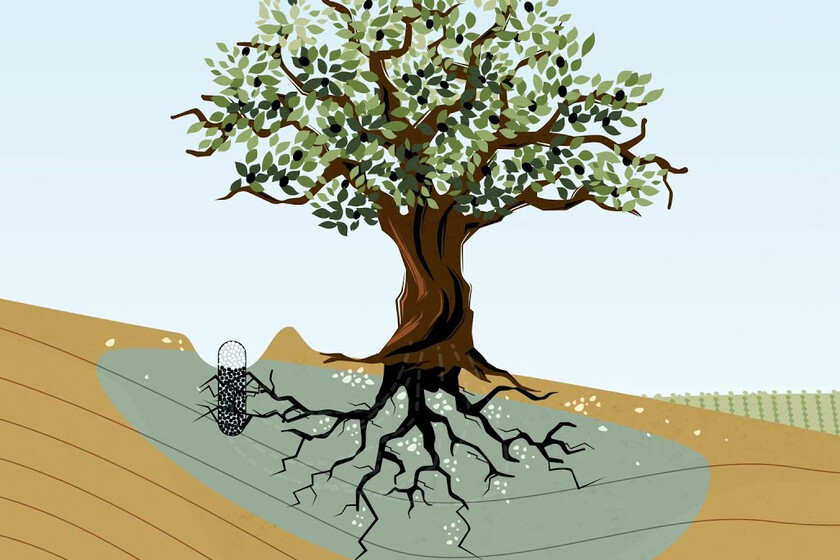 The drama the Spanish olive grove is experiencing could be many things, but it certainly isn’t surprising. 40 degrees in May burnt the olive blossoms and the lack of water progressively strangled the trees and left us in a very complicated situation. The worst crop of the century has already been discussed. And yet, there is a farm in Baena that hopes to produce 2,000 kg of olives from the 270 olive trees on this farm. a real barbarism. How is this possible?

Taking advantage of every last drop of water.

Let’s start from the beginning… How much water does an olive tree need?, Approximately and under normal conditions, one hectare of olive tree requires about 1,500 cubic meters of water per year. In general, when we talk about drylands, the average rainfall in regions like Jain can meet 70% of the needs of an olive orchard. The problem is that this year (this decade) is not normal.

Or rather, the problem is that even in this we are moving towards a “new normal”. We’ve had below-average hydric seasons since 2014 and, as a result, we’ve spent years with a problem at a critical point in the system: water scarcity. This problem, basically, stems from the fact that for some years the pattern has always been the same: fewer days of rain, but with greater intensity, and more frequent and intense episodes of torrential rain.

not all showers are the same, The rain that sustains the swamp and allows water to infiltrate are the deep storms of the Atlantic. Torrential rains not only do not “mobilize large amounts of rain”, but they do so in such a way that we cannot take advantage of the little water they release. We have no means of collecting and depositing it.

Given this, a team from the Department of Edaphology and Agricultural Chemistry of the University of Granada wondered whether there wasn’t some way for olive groves to take advantage of all the water lost through evaporation and runoff. The solution is incredibly simple and incredibly disruptive: The researchers built a giant sponge to bury next to trees.

A giant sponge? OK, not at all. As described in the patent, it is a cylindrical device filled with biochar (a type of activated carbon) that is buried next to the root with a connection to the outside and freezes up to five times its weight in water. The device allows “to ensure the depth infiltration of rainwater, irrigation or runoff, avoid its evaporation and optimize its use”.

a race against the desert, It is worth remembering that we have to go back to the early 90s (between 1991 and 1995) to find a drought worse than the current one. But, above all, it was he who referred to the results. Since then, our planning capacity and our water management tools have improved greatly and the most obvious result is that, despite the fact that only 25 per cent of the watershed since October 1, 2021 (the date on which the hydrological year begins) There has been a decline. % of normal in some areas, we are managing to reduce the damage.

This intruder is a good example of how technology is trying to win the race that Spain has kept up with desertification for years. A fifth of Spanish territory is already uninhabitable and 1% is rapidly deteriorating: we will need everything we can to halt the increasingly drastic process