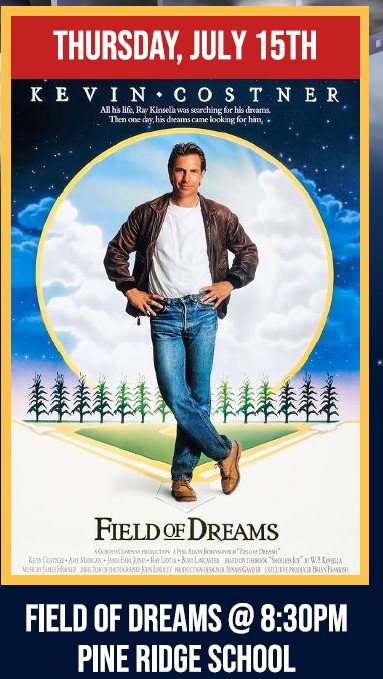 If you love baseball movies then Paradise Recreation and the Park District might just be the place for you. The District has launched a free monthly film series based around baseball movies.

The first film was held at Bille Park Meadow last month and was the classic “The Sandlot”. On July 15, the district will host the 1989 film “Field of Dreams” at Pine Ridge School at 8:30 p.m.

The arena where the film was shot in Diersville, Iowa, will host the Chicago White Sox and New York Yankees on August 12. Shoeless Joe Jackson, one of the characters in the film, played for the White Sox.

People attending the movies can buy hotdogs, sodas, popcorn, candy, and pizza through the snack bars on different sites.

The district does not allow outside food and drink but those interested can bring lawn chairs and their own picnic blankets.

The August film will be “A League of Their Own” on August 12, and will take place at Bille Park Meadow. Tom Hanks, Geena Davis and Madonna starred in that film.

Robinson broke the color barrier and in 1947 became the first African American to play Major League Baseball for the Brooklyn Dodgers.

“Moneyball” begins October 14 at 6:30 p.m. at the Terry Ashe Center. The Brad Pitt film is about how Oakland A’s general manager Billy Bean put the team together on a small budget with computer-generated analysis.

The film was adapted from Michael Lewis’s 2003 book “Moneyball: The Art of Winning an Unfair Game”. This will be the last film in the series before PRPD will watch the 2021 World Series live. The PRPD has yet to determine the site for that live viewing, but the World Series is scheduled to run from 26 October to 3 November.

High Cholesterol: Do You Have Tendon Xanthomas? Warning sign may ‘restrict mobility’