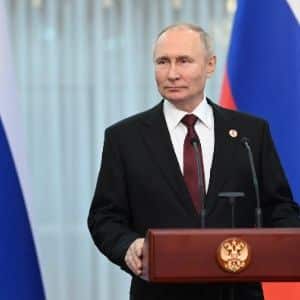 Russia’s President, Vladimir Putin, affirmed this Friday that the West uses Ukraine as “cannon fodder” while assuring that it is taking it on a “suicide route” by sending arms, ammunition and mercenaries. Running on.

The Russian President said in a message to the defense ministers of the Shanghai Cooperation Organization (SCO) and the Commonwealth of Independent States (CIS) that “for many years, the West has promoted genocide and terror in Donbass.”

In this sense, Putin said that the West has turned Ukraine “into a colony and is now using the people of Ukraine as cannon fodder, as a ram against Russia, as weapons and ammunition”. continues to supply Ukraine with weapons, sending mercenaries, propping it up.” A suicidal way”.

At the same time, he accused the United States and its satellite states of betting on the force factor. He stressed that “they have destroyed the architecture of strategic stability that has been taking shape for decades and are aggressively expanding the geography of NATO expansion” (North Atlantic Treaty Organization).

However, he stressed that “immediately new challenges have emerged and strong geopolitical changes are taking place. It will be long before we outline the framework of a truly multipolar world order”.

In the same sequence, Putin noted that new development centers have emerged in Asia, Africa and Latin America, which “more actively defend their national interests, their sovereignty and the right to their path of development. It is impossible to resist the processes.

On the other hand, the Russian President rejected the recent statements of the former German Chancellor, Angela Merkel, regarding the 2015 Minsk agreements, who he said only attempted to “give time to Ukraine”.

To this he said that “It is disappointing. To be honest, I did not expect to hear this from the former chancellor, because I always started with the idea that the leaders of the federal republics are having an honest conversation with us.

Teachers warn of pandemic’s cumulative impact on US students