Putin threatens the West to use nuclear weapons, the most horrifying scenario in the world 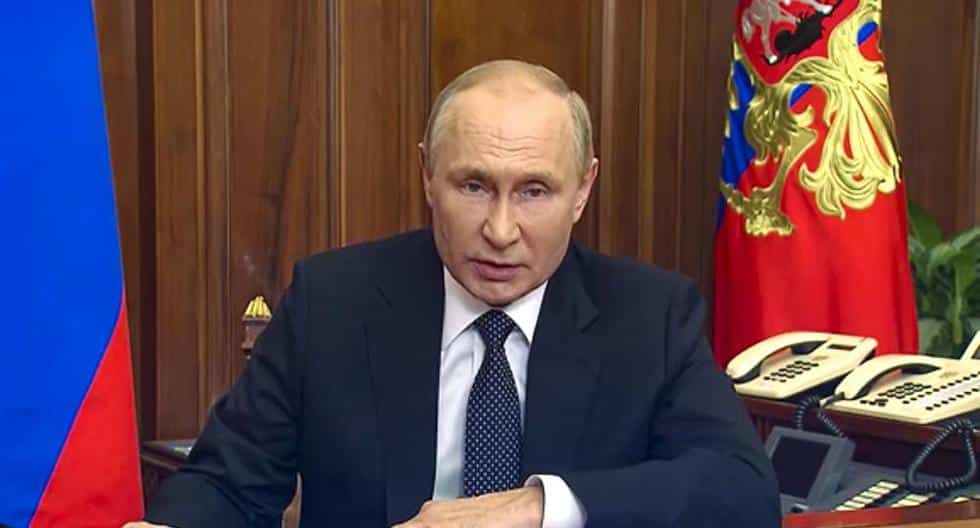 President of Russia, Vladimir Putingave a speech today on the Russian military operation in UkraineIn which he declared partial mobilization and therefore recognized for the first time that the country was “at war” on the neighboring country, once again justified the aggression and once again attacked the West and NATO.

Here are the key statements summarized by Putin during his 14-minute address to the Russian people:

-Our soldiers are not only facing neo-Nazi formations UkraineBut for the whole military system west, For this reason, it is considered necessary to make a decision that is commensurate with the threats we face: to defend our homeland, its sovereignty and territorial integrity, to guarantee the security of our people and the peoples in the Free Zones.

-I consider it necessary to support the proposal of the Ministry of Defense and the General Staff to conduct partial mobilization. Russian Federation.

,Only civilians who are in reserve are subject to military service., and especially those who serve in the armed forces, have certain military specialties and relevant experience. Those who are called up for military service before being sent to units will have to undergo additional military training taking into account the experience of a particular military operation.

The mobilization activities will start from today, 21st September.

-Russian citizens will receive the status called for military service by mobilization, Payment and all social guarantees of military personnel serving under contract.

The Decree on Partial Mobilization also provides for additional measures for compliance with the State Defense Order. The heads of companies in the defense industry are directly responsible for solving the tasks of increasing the production of weapons and military equipment and deploying additional production capabilities.

In Washington, London and Brussels they directly prompt Kyiv to transfer military actions to our territory. They already openly talk that Russia should be crushed by all means on the battlefield, With the complete plunder of our country, with the subsequent loss of all sovereignty, political, economic and cultural.

Nuclear blackmail was also done. We’re not just talking about the bombing of a nuclear power plant zaporiziaEncouraged by the West, which threatens a nuclear catastrophe, but by the statements of some high-ranking representatives of the main NATO states about the possibility and acceptability of the use of weapons of mass destruction against Russia – nuclear weapons.

– in respect of whom it is permissible to make such statements RussiaI would like to remind you that Our country also has various means of destruction, and for some components are more modern than NATO countries, You If the territorial integrity of our country is threatened, we will certainly use all means at our disposal to defend Russia and our people. This is not a hoax.

Those who try to blackmail us with nuclear weapons should know that even the compass rose can turn in their direction.

Russophobia, the destruction and justification of Russia

Kyiv initially reacted “very positively” to Russian proposals, including during talks in Istanbul, which focused primarily on the security of Russia and “our interests”. but This peaceful solution “did not suit the West”, Therefore, having reached “some agreement”, Kyiv “received a direct order to break all agreements”.

-Ukraine began to acquire even more weapons and to launch “hordes of mercenaries and nationalists” on the battlefieldAnd NATO trains the Ukrainian army and is under the “command of Western advisers”.

,The West aims to weaken, divide and ultimately destroy Russia. “They already directly say that in 1991 they were able to split the Soviet Union, and now the time has come for Russia itself to disintegrate into several regions that hate each other.”

– the West had been planning this for a long time, by encouraging “terrorist gangs” in the Caucasus, Promoting NATO’s “aggressive” infrastructure near Russian borders, weaponizing total Russophobia against Russia, and creating “decades of hatred” against that country.

Peaceful solution to the problem after the overthrow of the “Kyiv regime” donbassand in declaring its intention to possess nuclear weapons, it became quite clear that A full-scale attack on the Donbass was inevitable. Then there would be an attack on Crimea, the Ukrainian peninsula that Russia had occupied eight years earlier.

-The decision of a “preventive military operation” was absolutely necessary and the only possible, Its main objective, the liberation of the whole area of donbassThey haven’t changed.

-The Lugansk region has already been “almost completely freed from Ukrainian neo-Nazis”. Fighting continues in Donetsk. “Significant parts” of the southern regions of Kherson You zaporizia,

support for the referendum

Russia Knows that those who live in the free zones, first of all the historical land of Novorossia (the new Russia as the separatists call the union of self-declared people’s republics of Donetsk and Luhansk), do not want to live “under the yoke”. -of the Nazi regime”.

-All refugees from Zaporizhia, Kherson, Lugansk and Donetsk are the result of “atrocities” in Kyiv. More than 7.5 million people were “forced” to migrate to these areas. PutinWhich argued that Ukrainian troops “attacked hospitals, schools and organized terrorist attacks against civilians.”

We do not have the moral right to “cut to pieces” those close to us to the executioners. We can’t help but respond to his sincere desire to determine our own lives.

-We will do everything possible to ensure safe conditions for holding referendums (in the Donetsk, Lugansk, Kherson and Zaporizhzhya regions). We will support your decision regarding the future.

Play “Yo La Se” from home: Answer trivia to be one of the 10 winners of the week