Putin: “Unprecedented aggression was deployed to destroy the Russian economy, but it has failed” 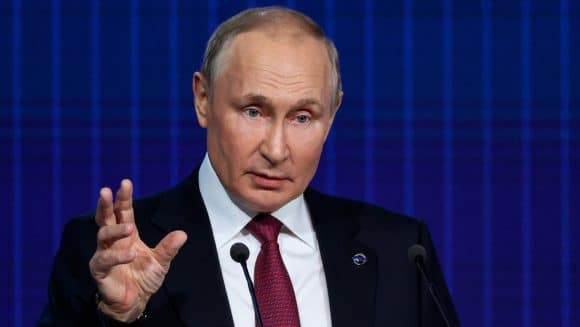 “Sanctions are being imposed on us, but we will definitely go ahead, relying first of all on our reserves and resources,” Putin said. Photo: Associated Press

Russian President Vladimir Putin said on Thursday that the West’s plan to destroy the Eurasian country’s economy, which includes an unprecedented onslaught of sanctions, has failed.

An “unprecedented sanctions aggression” was deployed against Russia “to bring down its economy in a short period of time by plundering Russia’s foreign exchange reserves,” but this plan, “as everyone can see, did not work, ” They said. Putin.

According to the president, with their measures, Western countries intended to devalue the Russian currency and cause catastrophic inflation.

He stressed that to counter this economic pressure, the business community and officials “cooperated professionally”, while citizens showed “responsibility and responsibility”.

Putin reported that GDP is expected to decline by 2.5% by the end of the year.

“Yes, of course, it is a decline, but it is not the 20% collapse that many Western experts were predicting when the collective West launched an economic war on us,” the Russian president said.

“Price levels in Russia, after a serious increase in March and April, have remained virtually unchanged since May, and the Russian ruble has become one of the world’s strongest currencies since the beginning of the year,” he said.

He stressed that this result was achieved through various measures, including the conversion of Russian gas payments into rubles, the active use of national currencies in trade with partner countries and “above all, thanks to a fiscal policy is included.

According to Putin, the two main objectives of the Russian authorities are to reduce poverty and inequality and to pursue development policies.

“Sanctions are being imposed on us, but we will definitely move forward, relying first and foremost on our own reserves and resources. We will continue to develop our country regardless of any external pressure,” he said , Russia would achieve “economic, financial and human resource sovereignty”.

In addition, among Moscow’s objectives is the elimination of logistical and financial borders to strengthen cooperation with its main partners.

The Russian president stressed that through the imposition of sanctions, the EU has only achieved unprecedented levels of inflation in Europe.

In addition, he revealed that Russia’s supplies of basic products to European countries increased 1.5 times in the first nine months of this year, despite the sanctions. “In short, the EU continues to consume our goods and services, while the reverse flow stops. These imbalances cannot be sustained forever”, he said.

He stressed that Russia would seek other “more promising” partners in Latin America, Asia, Africa and the Middle East, and that “it would redirect energy supplies to the markets of friendly countries.”

Ukraine’s military opened fire on the Russian city center of Donetsk on Thursday morning. From the Donetsk People’s Republic, it was reported that the Kyiv army fired Grad multiple rocket systems 40 times.

“This morning, Ukrainian fascists committed another war crime. Today at exactly seven o’clock in the morning, they subjected the center of Donetsk to the biggest attack since 2014,” the city’s mayor, Alexey Kulemzin, announced on his Telegram channel.

The Ukrainian attack killed one and injured nine, including a child. Officials said people were trapped in the rubble of a residential building after being hit by a projectile.

According to local Telegram channels, some rockets hit residential buildings. The impact also occurred at a kindergarten, shattering windows and doors.

There was also at least one direct hit to an apartment, which was followed by a fire in the building.

Eyewitnesses report that a gas pipe was damaged in a residential building, and a projectile hit the dome of a cathedral.

(in Spanish with info from RT)