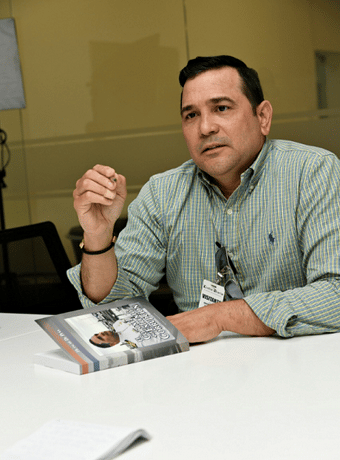 Colonel at the age of 39 Huascar Miguel de Pea Lizard He was forced to retire from the Navy in January 2013.

The fact that led to his retirement, he said, There was a seizure of a boat with 300 kg of cocaineIn Playa los Pescadores, in Las Terranas, in October 2012, a few weeks after he was appointed commander of the port of Samana.

In an interview, writing for Listin’ Diario, he explained that Declared only 120 kg of cocaine, that the seized Chubasco boat does not exist; That part of the drug disappeared and the prisoners were unloaded.

I thought it was because of the work he did He had earned a promotion. But, he said that was the beginning of his misfortune.

He says that he did not get support from his superiors, tried to bribe him, forced him to retire, was persecuted and threatened, to do the right thing and fulfill his duty.

In a book he wrote in exile, entitled “Colonel facing corruption”, gives his testimony about his forced retirement, the reasons for its origin and all the problems he faced in dealing with military corruption associated with drug trafficking.

,they started abusing me, A sick oppression that kept me in constant worry. They were following me all the time. Those were tough, stormy days, the kind that don’t let you sleep in the blink of an eye and make you stand up all the time,” the colonel explains in the book.

He indicated that they wanted to brand him as “the one with mental problems”.

This situation forced him to leave the country, so for many years lives in the United StatesLike his daughter, who first forced her to leave to save him.

There he had to work as an electrician and other trades related to the military sector, in which he was trained in the Dominican Republic and other countries where he took courses, including Israel and Colombia.

“I couldn’t get a job in the country because they made a file for me in the Navy,” he says.

Recognizing that they had been removed illegally and arbitrarily, from 2013 De Pea Lizardo initiated legal action, a process that culminated in 2014 with the Constitutional Court’s decision TC-0367/14, which ruled the Dominican Navy. ordered to be reinstated as captain. De Navio (equivalent to colonel).

Eight years have passed since that decision and it still has not been executed, despite all the efforts De Pea confirmed he made both at the institution and through the Constitutional Court’s decision monitoring unit.

The last appeal he makes is the current President of the Republic, Louis Abinedar, to whom he sent a letter presenting his case. Trust that you will get a favorable response.

However, he has no intention of remaining active, seeking his reinstatement, because what he pursues instead is his moral integrity and a deserved pension with rank and privileges corresponding to him.

Among the reasons for sentencing, the Constitutional Court established that the Dominican Navy did not demonstrate that the wounded soldier complied with the requirements set out in Law 873–78, the Organic Law of the Armed Forces, which required that he had a forced retirement. in violation of the rules in force at that time.

He points out that, according to this law, forced retirement income When the army has served for 40 years And that for ship captains, it is optional at the age of 58 by virtue of Article 232 of that law.

The soldier is 49 years old.

The Constitutional indicated that apart from not complying with legal requirements, there is no record in the decree’s file that the executive branch should issue an order to withdraw or annul a member of military institutions in accordance with Article 128 of the Constitution. and Articles 214 and 215 of Law 873-78.

Huáscar De Pea took advantage of his time away from the armed forces to study law.

In the book, he makes special mention to every member of the Armed Forces and the National Police “who have been victims of abuse and violation of their rights.”

Women’s handball team qualified for the World Cup in Slovenia