Richer than King Charles III, expatriate and controversial: this is Akshata Murthy, wife of the Prime Minister of the United Kingdom 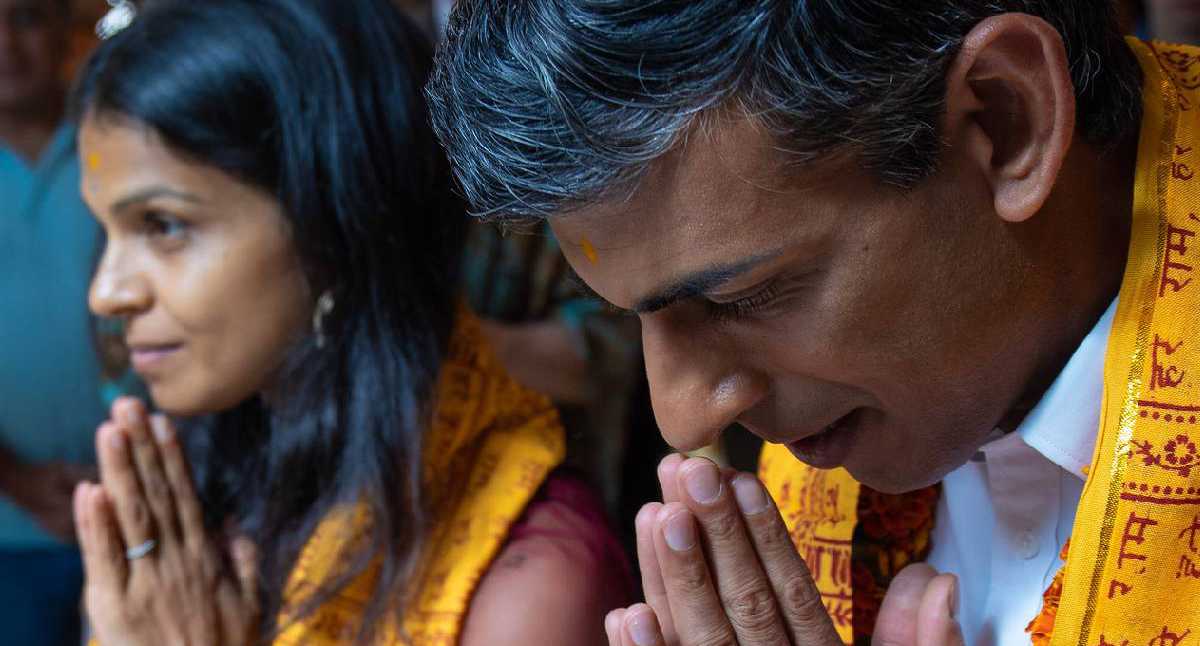 Long before her arrival at 10 Downing Street as the wife of Rishi Sunak, the Prime Minister and the new leader of the Conservative Party, Akshata Murthy was already a household name in the UK.

The 42-year-old heiress of a tech-savvy family in her native India, Murthy is one of the richest women in England with a net worth of 838 million euros, more than twice that of King Charles III.

The origin of such wealth lies, in particular, in his shares in technology services giant Infosys, which was founded in the 1980s by his father, Narayana Murthy, a computer programmer known as India’s Bill Gates. Is known.

She was born in the Indian city of Hubli, but as a very young girl, Akshata lived with her parents in Bombay. Later, she returned to her homeland, where she was raised by her grandparents while Murthy tried to build her own technology company.

Over time, the company became the largest of its kind, of which Akshata owns about 1% of the shares, which are valued at around €480 million, making her one of the richest women in the whole of the UK.

But his family not only brought him closer to the business world. Sudha, her mother, is a writer, engineer and philanthropist, meaning for Akshata an open key to the world of culture and intellectuals.

He also learned “the importance of simplicity and austerity” from his mother’s hand, as he himself remarked in an interview a few years ago. For this reason there was no television in his house and neither was his childhood of privileges. It was his mother’s decision that Murthy should concentrate on studying and studying.

This was his life in India when he went to the United States to study economics and French at the prestigious Claremont McKenna College in California. Later, she enrolled at the Los Angeles Institute of Fashion, Design and Marketing. And he ended his educational journey with an MBA in Business Management at the prestigious American University of Stanford, Where she met her husband, the current Prime Minister Rishi Sunak, the grandson of the Indian diaspora and a brilliant young British man at the time, who had won a Fulbright scholarship.

After graduating in 2007, she briefly worked in finance and marketing before setting up her own business: a clothing line under her name, Akshata Designs.

“I have always loved clothes since I was a little girl. My mother spent a lot of time creating different outfits for my wardrobe. I’ve collected an eclectic mix of staples from Gap and American Apparel, along with quirky things you can find on the streets of Mumbai and Los Angeles. I pair them with original pieces from vintage stores and, from time to time, with an Alexander Wang dress. I love their light, casual and fun clothes,” the designer told Vogue India in 2011.

That brand would close after just a year to give way to a new business aspect in her life: She became a director of Catamaran Ventures UK, a venture capital fund that invests in great futures companies, and co-founded the London branch of the Indian company Infosys with her husband, owned by her father.

Akshata also has stakes in at least six other companies in the United Kingdom, including a clothing factory that manufactures tailcoat uniforms for students at the elite Eton School, where Boris Johnson, among other prime ministers, studied. In 2021, it received around 14 million euros in dividends.

Overseas, Millionaires and the Controversial

Akshata Murthy and the current Prime Minister were married in 2009 in Bangalore. Away from their childhood penance, the couple shared a lavish party with their guests, which lasted for two days and was attended by over 1,000 people.

Today, at number 10 in Downing Street, the couple lives with their two daughters: Krishna, 11, and Anushka, 9.

Millionaire and sophisticated, the couple combine luxurious qualities. He owns an apartment in Old Brompton Road, one of the most prestigious neighborhoods in central London that also enjoys royal status, And the stately home is located in Kirby Sigston Manor, a small town in the County of York that is considered a national heritage of England and which he acquired for about 2 million euros.

Also a property in the exclusive London neighborhood of Kensington, worth 8 million euros and another on the California coast of Santa Monica (USA), worth just over 6 million.

According to the Daily Mail, his eccentric style inspired him, for example, to hold an annual party in his gardens every summer, with guests dressed in Gatsby-style and enjoying a variety of dishes and champagne.

But not everything has been rosy in the life of the couple. Sunak’s life has been marred by controversy after he was elected as the UK’s finance minister.

La fortuna de Akshata He caught everyone’s attention when the English press revealed that he does not have a tax residency in the United Kingdom and, therefore, must have been paying his taxes in India for years.

The Guardian added to these disclosures, saying that Akshata received approximately €13.32 million a year in dividends, for which she did not pay taxes to the British exchequer due to her status as a ‘non-dom’ (not resident). was. The loophole that foreign millionaires often use to avoid declaring income received outside the country.

To deflect criticism and try to “take off political pressure” on her husband, Murthy assured the BBC that from then on she would pay taxes on her earnings in the United Kingdom, although she insisted that her tax status Was “completely legal” until now. ,