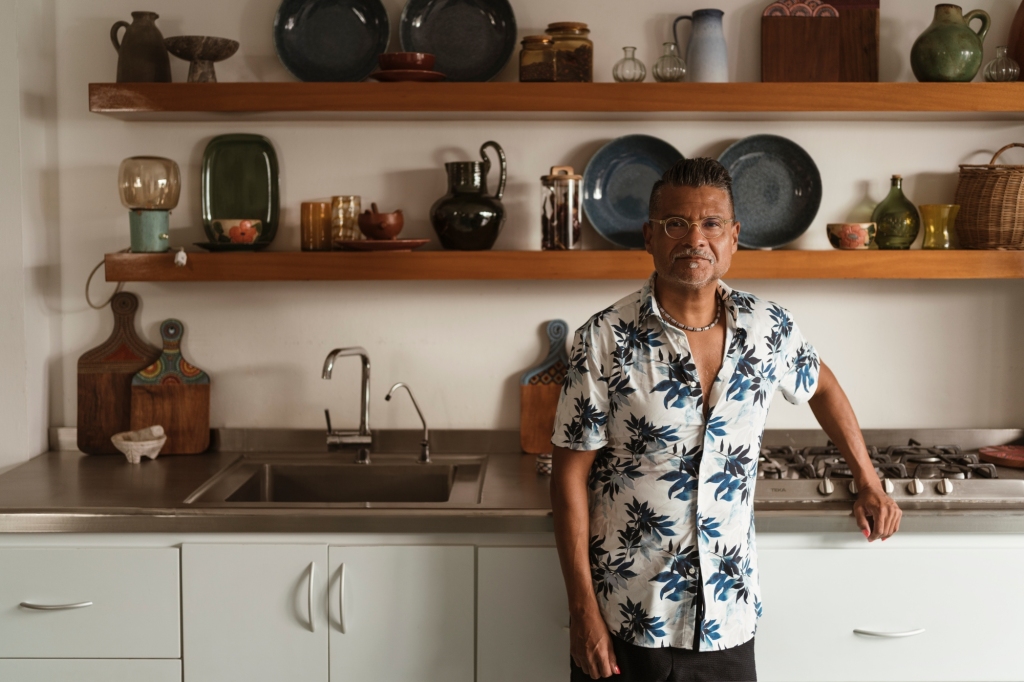 He had previously traveled to Mexico, but this time, Rick Martinez was on a mission. The New York Times contributor and former Bon Appétit senior food editor, took a trip in 2019 with a serious purpose: to research her new cookbook, “Mi Cocina: Recipes and Raptures from My Kitchen in Mexico.”

He found himself there when the pandemic broke out and there were more cases in the US at that time. So he decided not to return to his home in New York, thinking the move would be temporary—instead it was life-changing.

He traveled 20,000 miles, covering all 32 states and 156 cities, and the more he explored, the more he became infatuated with the country’s culture and cuisine. Now the native Texan calls Mazatlan home. This is where he lives with his sidekick in a house near the beach, a chocolate lab he named Choco.

Dedicated to Mexico, her cookbook is filled with over 100 recipes and dazzling on-location color photography. It has been praised by Time magazine, Food & Wine, Eater, Food52, Salon and Thrillist.

This is also a heartwarming memoir. Martinez grew up in Austin and during his elementary school days, students and teachers offered him donations he didn’t need, such as a fund drive to buy school lunches and a coat. They didn’t know that he didn’t grow up speaking Spanish, that his family owned a lake property or that he lived in a house with a swimming pool.

His mother, who died just months after seeing her son graduate from culinary school, was his inspiration and reason for his cooking. He had a wonderful sense of smell and never needed to savor his dishes. He made firearms with her but also cooked food for the family from his Betty Crocker book.

So when Martinez writes about Mexican food, it is from the perspective of an American, but one who consistently seeks a connection to a dish that speaks to his soul. Dishes infuse it with familiar and exotic flavors, and they are prepared for the home chef.

Q. I like that this book is personal. Even as a Bon Appetit customer, I had no idea you were Tejano. I’m from San Antonio, so I can really relate to your backstory. Now that you are living in Mexico, your Spanish must be fantastic.

A. It’s much better, but actually when I started traveling, I didn’t know Spanish and that was definitely a drawback. But as I write in the book, it was a choice my parents made as we grew up, and what it was like in Texas at the time.

> Understand completely. My father felt the same way. Was it important to let readers know, especially if they’re not sure about taking a deep dive into Mexican cuisine, that you’re taking this journey with them?

A. Yes. It seems to me that most Americans love Mexican food and I think most of them really only know about a few cuisines, right? The dishes people make and order the most are enchiladas, tacos, burritos, and nachos. This is just the tip of the iceberg. There is more to Mexican cuisine and I felt like the only way to successfully tell it was to actually go on a trip.

> What else was on your mind?

A. I wrote this book proposal in 2019. Trump was in office, immigration was a big issue and it still is. It has been politicised. At that time, whenever you heard about Mexico, it was about the border, about the crisis. It was children in cages, these people trying to cross the border illegally. I wanted to change that conversation. I wanted to present it in a positive light and show the beauty of the country and the people.

> It’s much more than a cookbook. Introductions are longer, more informative. You have written these short essays which are really making you think.

A. The story I told in this book came out of everything that happened to George Floyd and everything that happened after that, and it made me think about my situation and what I was doing at my job and what happened. Whatever I did, I pondered over it. , I tried very hard not to come across as angry or anything, except I just wanted to tell the story. If you just want to make recipes, you should be able to do that. But if you want to know a little more about me and what it was like growing up Hispanic in Texas and working in food media as a professional, you have access to that story as well.

Q. Did you find that if you had just gone back to the US to write this, you would have thought a little differently than you thought?

A. Oh yes. Perhaps the biggest change for me was self-acceptance. I don’t want to speak for everyone, but I think a lot of people of color, a lot of Latinos, you exist in a world where you want to hold onto your heritage and your culture and you want to celebrate those aspects. are your life. But there are times, at least for me, that I feel like I didn’t have to hide it, but I knew how to play the game, to get a promotion, to get a story, to get my book contract. For, I had to write a certain way. Or I had to set it up in a way that it was appealing to a white audience or a white editor or a white boss. Once I really started questioning it, I decided, I’m not going to do that anymore.

A. That’s what really changed my life and my outlook. I decided to live in Mexico because it made me feel comfortable. For the first time in my life I wasn’t the only brown person in the room. I wasn’t the only Mexican American at the bar or in the conference room or in the boss’s office. And I felt something I had never felt before.

> You have made a big leap. When I interviewed Molly Baz, we talked about how you guys were at Bon Appétit during a golden time. why did you go?

A. When Sohla (El-Waili) stood up and said, “I am not getting paid properly.” It took a lot of courage. And for that I thanked him. And then, I was like, why am I accepting this? Honestly, I was making $350 per video and the next person who had a contract – and we know this because we all shared this information when we started negotiating our contracts – a white person was making $1,000 Was… we negotiated for months and we couldn’t get a deal that was even close to that. … and I was like, you know what? I am worth more than that. I’m not going to beg on your YouTube channel. goodbye then.

> You really bring Mexico to life in this book.

A. It’s so vibrant and so bright and colorful and beautiful. I wanted you to pick up the book and feel that when I’m in Mexico, all that positive energy, all those bright colors, all that beautiful food.

Q. To me it’s as sophisticated as French cuisine, but you graduated from the French Culinary Institute, what’s your deal?

A. This is a complex dish. Take sesame for example. When I started this journey and I met many people and I saw that many people do mole and there were just few steps which I didn’t understand. I was like, I don’t know why you’re doing this because it’s a lot of trouble… there are a lot of techniques, like refriing, that’s not just for beans.

Q. How does it work?

A. You mix tomato, onion, garlic, chili. And then you put it in hot oil… so you’re going to make a mess on your stove. Let’s be honest. I can see that when you do this with beans, you’re really frying and you’re getting caramelization, but if you’re throwing the liquid into the fat, it’s going to take a while before you’re actually frying any. You must burn all that water in order to produce caramelization.

> Does it matter much?

A. It really does. There’s something about the rapid heating of those vegetables, peppers, and spices that adds to this further depth of flavor. You cannot make a good mole without doing these steps.

Q: The dishes are delicious: guacamole with citrus carne asada, buttery escutes, flavored beans with epazote and lots of fresh jalapeos. I love that you give options to the readers. You don’t say make it that way at all. When I interviewed Joseph Centeno he said that Tex-Mex food should not be marginalized because it is not “authentic”. Do you think it’s time for eaters to rid themselves of that word?

A. 1,000%. I hate that word because I think it’s a complete American construction. To me, this is literally where marketing and racism intersect because as a person of color, when you write a book about food that isn’t American, the most praise you can get is that your food is authentic. Is. They were trying to impose that kind of language on me.

> So you opposed that word?

A. Everyone has the right to have their own opinion about how to prepare a particular dish. So why can’t my food be Rick’s interpretation of these Mexican dishes? And the reality is, in Mexico, no one goes around to say, oh, you did it wrong. If I asked 10 people in Mazatlan to come and make tacos gobarnador, you’d get 10 versions of that dish. And each one would probably be unreliable and they would all be different and no one would bother with that. It’ll be like, wow, we’re going to taste different people’s food, and it’s going to be great. And you will celebrate those differences.

Q. Would you like readers to know a little more about this book or about Mexican cuisine?

A. If I can’t find any of the ingredients in Mazatlan, chances are you won’t be able to find it in Kansas. So I didn’t want anyone to have to order special ingredients or buy special equipment. It should be, “I’m going to the grocery store, I’m going to HEB or Randall’s or Safeway and everything will be there and I’m gonna make it. And it’s going to be really, really amazing.” But I also want you to buy that ticket to Oaxaca and go there and eat sesame, because that is the true experience of Mexico.

Meet the author: Wednesday, May 18 at 6 pm, Rick Martinez will appear at Talula’s 118 Entrada Drive, Santa Monica. $65 per person includes book, two cocktails, snacks, and a bag of masa harina. For tickets, visit longulasrestaurant.com. Thursday, May 19 at 7 p.m., Martinez Second Home Hollywood, 1370 N. Will be available for an event called “Rick Martinez in Conversation” at St. Andrews Place, Los Angeles. Tickets are $45 and include a signed copy of the book. For more information visit nowservingla.com.

As space shrinks, options for businesses get creative