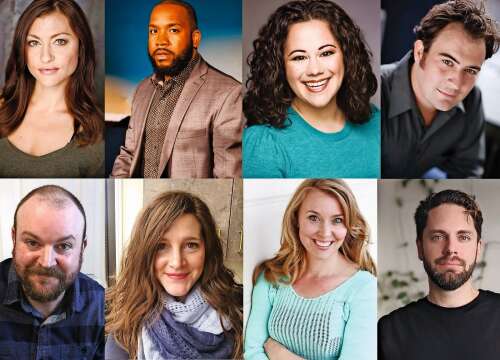 The Rogue Valley Symphony will give a one-day performance of Peter Boyer’s “Ellis Island: The Dream of America” ​​on Sunday, March 27 at 3 p.m. at the Craterian Theater at 23 S Central Avenue in downtown Medford.

The Grammy-nominated work – performed across the United States – has become one of the most performed orchestral works of the past 15 years.

This famous work for seven actors and orchestra celebrates historic American immigration through a powerful combination of symphonic music and the spoken word, using the words of real people from the Ellis Island Oral History Project. Craig Jason, RVS stage director, has assembled an extremely capable group of actors, all Southern Oregon University graduates in the theater arts, each of whom has an impressive list of acting credits in film, television, and on stage.

The performance will also be accompanied by visuals created by the Pacific Symphony, adding to the power of the performance.

The composer, Peter Bauer, will attend and participate in pre-concert lectures along with RVS maestro Martin Mazkut.

Boyer began composing at the age of 15. His first major composition was the massive Requiem Mass in memory of his grandmother. His work has been profiled and/or reviewed by The Associated Press, The New York Times, The Washington Post, USA Today, Variety, Los Angeles Times and others. Boyer has received several national awards, including two BMI Awards and an Emmy nomination for his performance of “Ellis Island” on PBS.

Also in the “Journey to America” ​​program is “Phantom for Tomorrow”, prepared by Bauer for the 2021 opening ceremony. Made for the entire orchestra, this piece will add to the mood of celebrating the patriotism of our country.

The performance will also include Aaron Dworkin’s “The American Rhapsody,” a multimedia orchestral retelling of the life of America’s first President George Washington and the story of the United States through the prism of words.

Spoken words for “The American Rhapsody” will be given by Marquess Jarrell Ruff, a former member of the Grammy Award-winning ensemble Chanteller. Ruff has been the featured soloist on several recordings, including the world premiere of famed American musician Nico Muhly, entitled “Three Moon Songs”.

The work “The American Rhapsody” is based on Samuel Coleridge-Taylor’s symphonic variation On an African Air, which explores the ideals of courage, freedom, and commitment, while also serving as a tale of vulnerability and the face of great injustice. Humanity progresses through our history.

a look at the artists

April Grace Lowe has performed on stage in New York and Los Angeles. He received a BFA from Southern Oregon University and several awards for work in the feature films “Beyond Methuselah” and “A Promise of Time Travel”.

Brooke Lynn Calcagno last appeared on stage in southern Oregon 20 years ago while studying acting at SOU. Now performing at Theater Vertigo in Portland, she has been a member of the company, actor, and producer for over six years. He has also worked at Profile Theatre, Northwest Classical Theater Company, Lakewood Theatre, The Coho and Anonymous Theater Company.

Jessica Geffen is a proud graduate of SOU, where she received a BFA in Theater Arts. He most recently worked with Hillsborough’s professional theater company, Bag & Baggage Productions, as a resident actor and supporting artist for six years. He has also worked with PDX Playwrights, Well Arts, Public Playhouse, Portland Actors Ensemble, and Lunacy Stageworks.

Douglas Killingtree is an actor, writer, illustrator and SOU alum. Credits include Hamlet in “Hamlet” (Portland Actors Ensemble), Mercutio in “Romeo and Juliet” and Gratiano in “The Merchant of Venice” (Vortex Theatre), Lord Edgar/Jane in “The Mystery of Irma Weep” (Oregon Cabaret) Includes Twisden. Theatre), and many others.

Scott Fullerton studied theater arts at SOU before moving to Portland to pursue a culinary career. For the past 12 years, he has been working as a chef in various Portland restaurants. He last appeared in the Portland Actors Ensemble’s production of “Hamlet” as Hortio.

Matthew Brown is excited to be back on stage in Southern Oregon. Matt received a BFA from SOU and an MFA in Classical Performance from Florida State University. His past performances include Asolo Rap, working for the Oregon Cabaret Theater and five productions over two seasons at the Oregon Shakespeare Festival.

Angela Risk is thrilled to be back on stage in Southern Oregon. She holds a BFA in Performance from SOU, and is currently living in Sonoma, California, working as a voice actor. She is an Audible approved narrator, where her voice can be heard on over 50 titles. Recent on-camera work includes “Beyond Methuselah,” where she received Best Actress for her portrayal of Emma at the Indie Gathering International Film Festival.