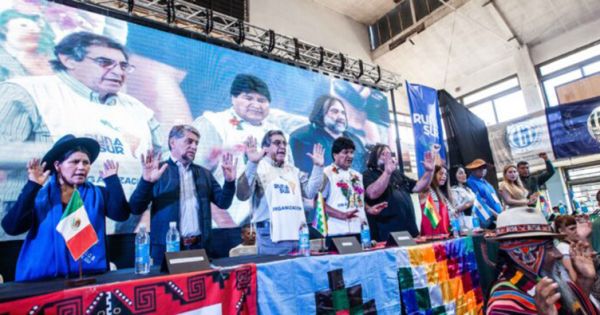 The organization promotes a “multinational, anti-imperialist and anti-capitalist America” ​​to protect the unity of indigenous peoples, popular movements, women, youth, Afro-descendants and unions, it was explained.

The event was held at the facilities of the Banco Nacional Club, on the outskirts of the city of Buenos Aires, after two days of deliberations.

Morales explained, “We are building a movement of the people, Ransur, with a very concrete proposal that it is a responsibility to build a multinational America for the people.”

“This social, cultural, labor movement must be anti-capitalist and anti-imperialist,” he said.

Morales told Xinhua that the name Runasur, born on April 25, 2021, is derived from a combination of the Quechua words “runa” (man) and unasur (South American League of Nations), condensing the idea of ​​an unasur. People..

“Unsur belongs to the states. Runasura belongs to the people. Runa in Quechua says ‘person’ or ‘people’, and as we have lost many presidents of the left in South America, Unasur was paralyzed and this deep feeling of people, social forces, continuing Unasur’s policies. comes for. , He continued.

Pluralism is “the union in diversity to face the adversity left to us by the capitalist system. Morales also said that having been president, I am much more convinced that cultural diversity is an asset to the region.

“Pluralism is the unity of diversity, which guarantees sovereignty, liberty, dignity, independence, identity, to withstand adversity”, questioning the United States for promoting a system of concentration of capital in the few hands. Besides, abound.

“As long as capitalism exists, the struggle continues, because capitalism and imperialism bring injustice and inequality, and when they cannot dominate, democratically win, military intervention ensues,” he also said.

“What democracy can the United States talk about, the only thing it knows how to do is to impose economic blockades on free countries, to plan and invest in coups or military interventions with military bases?” He asked.

During Sunday’s meeting, the dignitaries also read a statement highlighting the electoral victories of Gustavo Petro in Colombia and Luiz Inácio Lula da Silva in Brazil, in addition to rejecting the political oppression and criminalization of social leaders in the continent- Along with economic blockade. Against Cuba, Nicaragua and Venezuela.

The “Plurnational Assembly to a Plurnational America”, which formed Ransur, ended with the reading and signing of the “Declaration of Buenos Aires on the Situation in Latin America and the Caribbean”.