Santiguena, following in the footsteps of the alleged hit man hired to murder John Paul I. 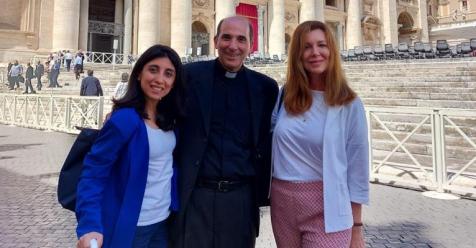 Santiago journalist Cintia Suárez, along with Nunzia Locatelli, an Italian colleague living in Argentina, investigate the mysterious death of Pope John Paul I, who only lasted 33 days as supreme pontiff. This is how they managed to contact a US citizen who assured that he had been hired for religious murder.

This investigation is a continuation of the work of both and they asked “What have they done?” reflected in the book, which deals with the Argentine miracle of Pope John Paul I and conspiracies about his death.

After the publication of this book and while they await a translation of this latest work into Italian, as well as the book “Mama Antula, the Most Rebellious Woman of Her Time” (an edition with a foreword by Governor Gerardo Zamora), Journalists from Santiago del Estero and Italy, want to clarify the doubts surrounding the death of Albano Luciani. Investigating, they manage to contact an American who claims to have been hired for the murder of Blessed John Paul I as a result of his investigation into the finances of the Vatican and has uncovered a worldwide scandal. could.

This was revealed by Cintia Suárez to EL Liberal during her visit to the newsroom, and details her visit to Rome where she participated in the beating of albino Luciani.

The Santiago woman said they had already had the first conversation with this man who lives in the United States, a veteran of the Vietnam War, and who promised to reveal all details about the alleged crime of John Paul I. did.

It is the Pope who lasted only 33 days in office: on the morning of September 28, 1978, he was found dead in his bed. Albino Luciani was 66 years old.

“In the book, within various hypotheses, a crime is spoken of and we are after a possible interview with a man who claims to have participated in the death. This is a man who is in the United States. We are in touch with him to hear what he has to say,” said Cintia Suarez.

To participate in the Beatification of John Paul I – and to be able to thoroughly examine the State Archive of Rome (see separate note) – Cintia Suárez and Nunzia Locatelli traveled to Rome on 1 August and in mid-September. until he lived in Italy, where he met the Italian Pope’s native city.

“We went to Rome for thanksgiving because we were invited after the book we published ‘What they have done.’ Today it’s a forgotten pope: the Vatican is surrounded by shops, sanatorias, souvenirs. We went to buy things from the blessed ones for the day of the ceremony and the Pope can give them his blessings and there was nothing more to you. Found small glasses of tequila, but nothing of John Paul I inside the Vatican!” He gestured with surprise and dismay.

We were at the ceremony that was presided over by Pope Francis in St. Peter’s Square, a ceremony that was unique because it was a Pope. Later we learned the land of Saint Francis of Assisi and then we finally arrived at Albino Luciani, the birthplace of John Paul I, the Canale d’Agordo, a small town on the Austrian border, where there is a replica of the ceremony. . was held, after the beating.

“At the press conference we were with the nun who found her dead, Sister Margarita Marin. We were also with Father Jose Dubasti, a priest who has miracles happen as he prays for a girl who lives in Favaloro. who was evicted. for medicine and he was about to die and he says to his mother, let’s pray for John Paul I, and the miracle of his healing happens,” Suarez through the country of Europe Said about the trip.

On the other hand, in addition to John Paul I’s bond with Argentina through this miracle, for which he was declared blessed by Pope Francis in early September, Cintia Suárez said that there are other facts that would allow him to share with our country. add up.

The journalist indicated that his father, Giovanni Luciani, a communist activist, had come to Argentina in 1913 as a swallow worker to work on a water project in La Plata, when Albino Luciani (later father) was just a child.

In addition, John Paul I was the first to intervene on behalf of the Holy See to end the tense conflict between the dictatorships of Argentina and Chile, which threatened to start a war in 1978 because of a border dispute.

He wants Mama Antula to be Doctor Honoris Causa

Adding documents to promote his project so that Anse declared Maria Antonia de Paz y Figueroa Doctor Honoris Cosa, Blessed Mama Antula, Cintia Suárez was in the State Archives of Rome. There, along with her Italian colleague, Nunzia Locatelli, who lived in Argentina, she had some 50 letters sent by the religious of Santiago to a Jesuit who had been exiled to Rome, also from Santiago. “It is about Gaspar Juárez, the first Argentine botanist. We are talking about the period that goes from 1774 to 1780,” he specified.

“This is a completely disruptive project, in the sense that it has been going on since 2018. The two bastions of this project are the Rector, Eng. Hector Paz, and Eng. Pedro Basuldo, Dean of the Faculty of Exact Sciences, who worked closely with the whole process. Because in the first place, Anse’s internal rules had to be changed, because it is unusual for Doctor Honoris Causa to declare a postmortem,” Suarez told EL Liberal about the initiative for the common woman of Santiago. this title.

“The central argument lies in the letters of Mama Antula, as said by Dr. Pedro Luis Barcía, who was the President of the Academy of Letters of Argentina, the first author from the Mama Antula River Plate. To present this project of a secular university, but which is more of a religious question—she has transcended her vocation—already as the first River Plate writer”.

He said that “the process is very advanced and it is my personal wish that next year, on March 7th, which is Mama Antula’s Feast, we can be with what will be the ceremony for the announcement of Doctor Honoris Causa”.

The journalist insists that the project also comes down to keeping Mama Antula’s holy cause alive. And he pointed out that he was the first person in Argentina to be nominated for sainthood in 1905, but the process has been delayed.

However, the Santiago journalist received a significant impetus to further the cause: Pope Francis, who could not receive him in Rome, encouraged him to continue the struggle for the consecration of Maria Antonia de Paz y Figueroa. sent a letter. Mother Antula.