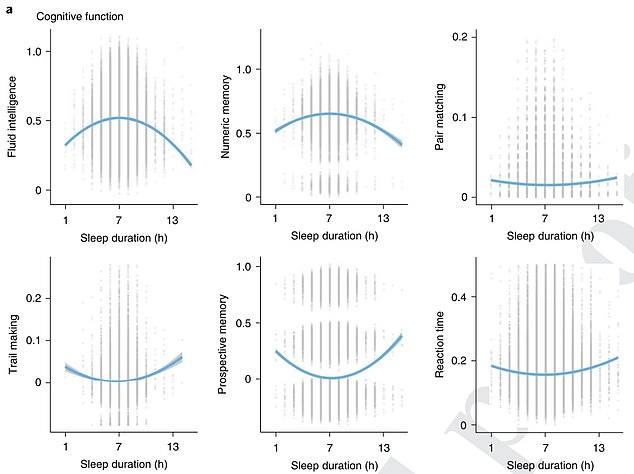 According to science, eight hours of sleep every night in middle age is not the ideal duration.

Researchers at the University of Cambridge are now recommending people take seven hours—which they say is the best place to stay for general health and ward off dementia.

The downgrade comes after studying the sleeping patterns of half a million Britons aged 38 to 73.

People who got more or less than seven hours per night scored worse on tests of speed of thinking, attention span, memory and problem-solving.

Until now, eight hours of uninterrupted sleep was considered the Goldilocks zone for sleep, providing the best overall health benefits.

But sleep disruption—which occurs both for those who sleep too little and too long—is linked to a buildup of plaque in the brain—a telltale sign of dementia. 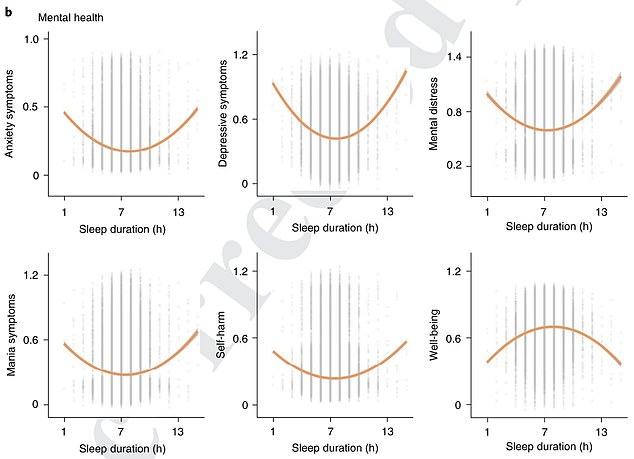 A Cambridge University study shows a link between hours of sleep per night and various measures of brain function (blue lines), including memory and reaction time, as well as mental health, including depression and anxiety. Findings suggest that those who get seven hours of sleep have the best cognitive performance and mental health, with more or less sleep resulting in poorer performance (shown in a U-shaped curve).

Sleep is essential for brain plasticity — the ability to process information and remember things — as well as for removing waste products from brain cells, regulating metabolism, and maintaining the immune system.

The NHS recommends six to nine hours of sleep each night for adults, while children’s developing brains need up to 12 hours per night.

But it is often more difficult for middle-aged and older adults to fall asleep and stay asleep. Experts believe that it triggers cognitive decline and can exacerbate mental problems in our senior years.

How much sleep should I get?

Most adults need six to nine hours of sleep each night.

Going to bed and getting up at the same time each night programs the brain and internal body clock to get used to a set routine.

But some people stick to a strict sleeping pattern.

To sleep easier, the NHS recommends winding down, such as taking a bath, reading and avoiding electronic devices.

The health service also recommends keeping the bedroom sleep-friendly by removing the TV and gadgets from the room and keeping it dark and clean.

For those struggling to sleep, the NHS says keeping a sleep diary can help uncover lifestyle habits or activities that contribute to sleepiness.

The researchers examined data from 498,277 adults aged 38 to 73 years collected from the UK Biobank – a database of patients monitored for 10 years.

Participants were questioned about their sleep patterns, mental health and well-being and took part in a series of cognitive brain tests completed on a touchscreen tablet – including assessments of their reaction time and memory.

The results, published in the journal Nature Aging, show that periods of insufficient and excessive sleep are associated with poorer cognitive performance, such as processing speed, visual attention, memory and problem-solving skills.

Those who got seven hours of sleep a night had the healthiest brains.

They had better cognitive performance and mental health than those who slept more or less than seven hours – with lower levels of anxiety and depression, and better well-being.

The researchers said one reason for their finding may be that those who got less than seven hours of sleep were having a disturbance in their slow-wave deep sleep.

Those who sleep too much can also be affected, as enlarged eyes can lead to poor quality and fragmented deep sleep.

These types of sleep disruptions have been linked to a buildup of a protein called amyloid in the brain, which is one of the key theories about how dementia develops.

Amyloid occurs naturally but high levels of it cause proteins to clump together and form plaques that cause ‘tangle’ in the brain and disrupt cell function.

The researchers noted that lack of sleep can also make it more difficult for the brain to get rid of toxins.

And brain imaging data from nearly 40,000 participants showed a link between sleep duration and the structure of brain regions involved in cognitive processing and memory.

Those who had more or less than seven hours had major changes in these areas — including the precentral cortex, lateral orbitofrontal cortex and hippocampus — the team found.

The researchers also noted that seven consecutive hours of sleep each night ‘without much fluctuation in duration’ was important for brain function and mental health.

Professor Barbara Sahakian, a neuroscientist at the university and co-author of the study, said: ‘Getting a good night’s sleep is important at all stages of life, but especially as we age.

‘Finding ways to improve sleep for older people may be important for helping them maintain good mental health and wellbeing and avoid cognitive decline, especially for patients with psychiatric disorders and dementia.’

Professor Jianfeng Feng, a brain expert at Fudan University in China and co-author of the study, said: ‘While we cannot conclusively say whether too little or too much sleep causes cognitive problems, our analysis shows individuals a longer duration. Looking in seems to support this idea.

‘But the reasons why older people have poor sleep appear to be complex, influenced by a combination of our genetic makeup and the structure of our brains.’

Robbie Amell: The Flash’s wrinkle on Caitlin’s reunion with husband Ronnie is ‘pretty messed up!’

Brazil’s DF . Sealing of ballot boxes for elections started in