Seven Powerboats: The Dream of the Cruz Masonway Brothers 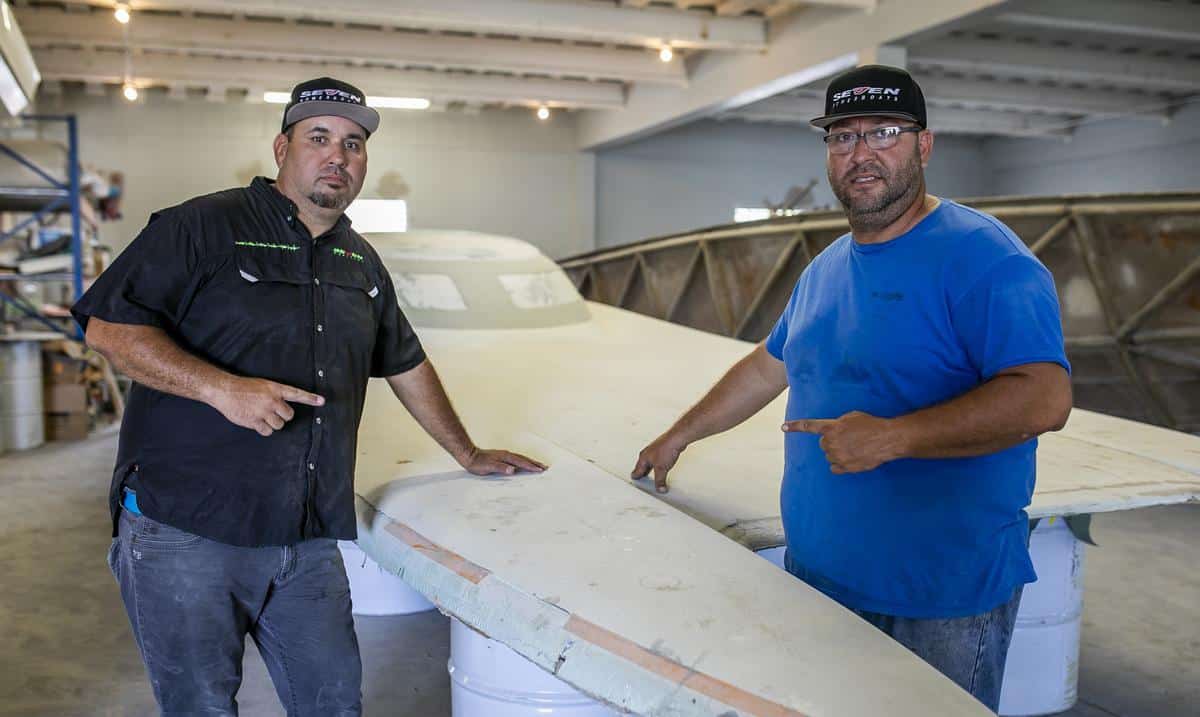 The idea of ​​buying molds to build the boats seemed a bit far-fetched, but Arthur “Alti” Cruz Masonway had the hope that one day the impossible would become a reality.

It wasn’t until a stroke of luck put his life project on track that he saw the birth of his company Seven Powerboats in Aguadilla, where a variety of boats ranging in length from 15 to 45 feet are built.

However, the key to success is the product of the hard work of this man from Aguadilla, who embarked on the adventure with his brother Alexander and his mother Minerva, ensuring the quality of the product that has sparked interest in sailors inside the Puerto Rican archipelago and out.

According to Cruz Massonway, 44, Boat fever started when he and his brother were young, as their father made yola and took them fishing.

“When the economy collapsed 16 years ago, I traveled to the United States and bought boats because the economy was cheap, I brought them in and sold them. So, some of my Cuban friends from whom I used to buy boats gave me the opportunity “They offered me a factory, we bought it between the two (brothers) and we started manufacturing in Florida,” he said.

“We thought it was a matter of pride because this is where all boats are sold. But we had to break the factory because the cost was too high, we traveled for two weeks there and two here. From there, I brought a mold here and we made small boats for the testing friends, the fishermen”, he recalled.

Thus, they had a successful restaurant that closed due to the passing of Hurricane Maria. This prompted them to rescue boats on Cabo Rojo and Tortola Island.

“What I never thought happened and is that we started selling boats to the USA. One ‘dealer’ ordered 10 from us. Now we sign on for another ‘dealer’ to make 30 a year Let’s do it. That’s where the ‘trailers’ come in because nobody in Puerto Rico did them. So, we bought the machinery, we have the structure”, he said.

“Not everyone can have a boat, but everyone has an old little boat, like in Puerto Rico the roads are in bad shape, saltpeter spoils the drag and then we’re going to get the drag of aluminum, ‘stainless steel. to such a level that they are certified by the United States and you can take it anywhere,” he argued.

He insisted that the boats in his factory are built “from scratch to take to the water to sail”, employing about 20 people.

,I have a ‘center console’, sports boats that are catamarans, racing catamarans and we’re going to represent Puerto Rico in the United States and represent things made in Puerto Rico so people can see the product from here. Everything is built from scratch. It’s not like we paint or repair a boat, assemble it, paint it and put it in the water”, he said, adding that “it takes two weeks to cast a boat”.

For his part, his brother Alexander acknowledged that the experience has been “a bit laborious”.

“Finally, it is a great satisfaction because the boats made by family and staff are floating in Puerto Rico and international seas. Very happy because we are making a quality product with USA specifications. They are the best There are quality boats at a price because they are buying directly from the manufacturer”, said Alexander.

,Boats can be ‘customized’ as they wish; The colors, the doors, the drawers, the seats and everything else made by Puerto Rican hands. We encourage all young people who want to work, who have the desire to learn, to train here and make them do a job that is rewarding. Those who are passionate about the ocean will love it”, he assured.

How much do your boats cost?

,from $25,000 and up, Cheaper than ‘Jet Ski’, but Catch five guys, you can run at night Because jet ski is until sunset. You can put your cooler and one with your drag and everything. Plus, it’s fully financed in Puerto Rico,” Arthur explained.

“In fact, our goal is to keep Puerto Rico’s name high in terms of boats, no one believed it could be done on the island, everything was brought in from Florida. When I take a racing boat to the islands , then the market is about to open, as my boats have not yet reached the islands”, he concluded.