Sha’Karri Richardson stays true to herself 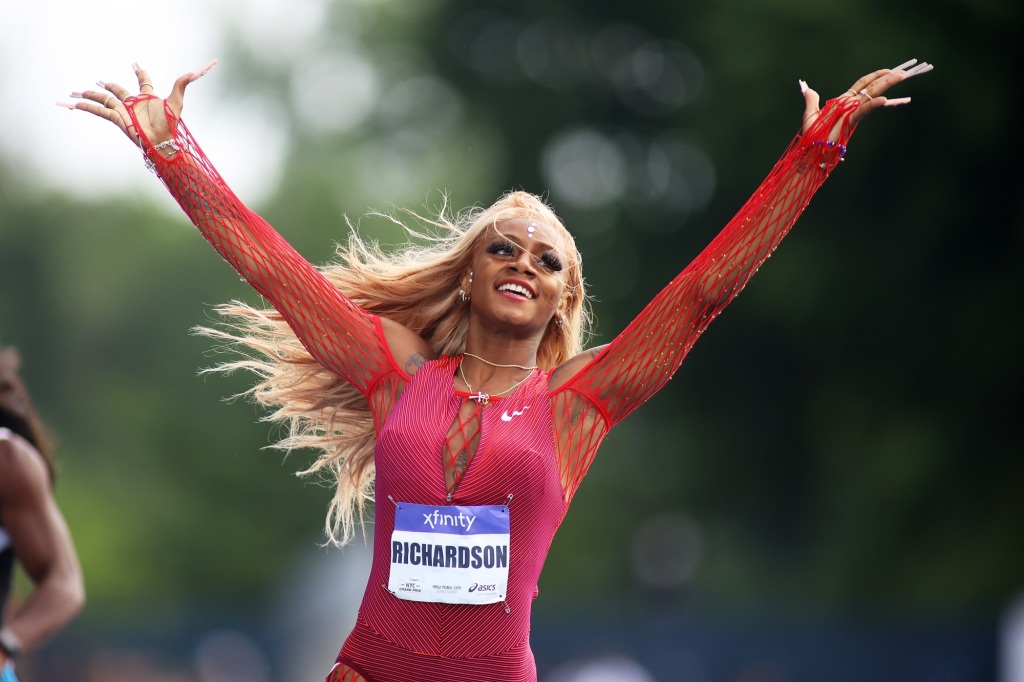 It’s not that Sha’Karri Richardson didn’t warn us.

“This sport has been silent for too long,” the sprinter tweeted on June 7.

Translation: Richardson, a 22-year-old lightning rod, the fastest American sprinter in over a decade, was about to get loud on and off the track.

In the days and weeks that followed, Richardson took on the US Anti-Doping Agency and NBC’s “Today Show” on social media and cemented her position as the world’s fastest fashion statement by appearing at the US Grand Prix of Athletics in New York in a suit. wearing a shoulder-length red fishnet jumpsuit under a hot pink uniform that was open at the front somewhere between PG-13 and R, a bejeweled forehead between long flowing blond curls and diamond-studded earlobes.

“It’s something that I always stand out, no matter what my performance is, no matter what the media says or what other people say, I express myself and show people, no matter how the company, the media, people may try to limit you, always stay in touch. your truth,” Richardson told reporters after the meeting. “So I express it with what I wear.

“It’s not just about fast running. It’s about who I am and you can be anything to anyone.”

Richardson arrives at this week’s US Track and Field Championships in Eugene as the most recognizable and most controversial athlete at the same time.

The 22-year-old Texan sparked rumors last year that she could break Florence Griffith-Joyner’s 100m world record, set almost a quarter of a century ago at 10.49 seconds. And she angered the sport by testing positive for marijuana in the Olympic trials last June, resulting in a 30-day ban that prevented her from competing in the Olympics.

The suspension was followed by a series of high-profile social media skirmishes and a scathing interview on national television after she finished last in her first race since the doping ban was lifted.

“Sha’Karri is a real firework,” said Justin Gatlin, a 2004 Olympic gold medalist in the 100m and Richardson’s former training partner.

For others, she is a ticking time bomb, equally capable of sparking international controversy as she clocks mind-blowing times.

“The only reason I’m on social media is to see what she posts,” Renaldo Nehemiah, Richardson’s agent, told reporters after the meeting in New York.

To her friends and admirers, she is a heroine of her time, whose frankness resonates with many who feel they have not been heard; misunderstood superstar whose caring and empathy is hidden under a brash and loud protective shell. “This is my little M&M,” Gatlin said. “She’s very hard on the outside, but inside is a big soft teddy bear.”

To others, she’s obnoxious, unholy self-promotion, too quick to go out of her mouth, too quick to tweet; a simpleton who is ready to conquer the world, but does not yet understand who she is up against.

“She didn’t know who Max Siegel was” until earlier this month, Nehemia admitted. Siegel is the CEO of USA Track & Field, the sport’s national governing body.

“Her fans who love that she’s a champion to them because she’s kind of the voice of the voiceless who don’t have the ability to say what they want to mean for whatever reason,” continued Nehemiah, the former world record holder in Hurdles 110 meters. “And she says it without making excuses. So that’s how they are, and I’ve heard people say, “That’s how I feel. She just spoke for me. That’s why these people are drawn to her.

“Then you have others, like you have this woman, a black woman of all things, so brash and arrogant because that’s usually reserved for guys. It’s more acceptable for guys. So now you have the next Flo Jo with a voice, not just a flair, and they’re exclaiming, “Wow! What is it?’ And it’s not pretending, that’s who the man is

But Richardson is too hard to ignore.

What other 21-year-old Olympian was mentioned in the presidential interview in the same way that Richardson was last summer?

President Joe Biden said he was “really proud of the way” she reacted to her doping ban, but added, “Rules are rules.”

And what other sprinter had a documentary about them premiere at the Sundance Film Festival?

Sub Eleven Seconds was directed by Bafik, a British filmmaker and photographer who has worked with Louis Vuitton, Gucci, designer Kiko Kostadinov and singer Nene Cherry. It was created by the late fashion designer Virgil Abloh.

One of the film’s most poignant moments comes from Dennis Mitchell, Richardson’s coach and former Olympic medal-winning sprinter.

“Everything she’s been through,” Mitchell said, “everything that’s happened to her in her life, whether it’s good or bad, all spills into that ten-second period.”

And there’s a lot to unpack.

“Time is my blessing,” Richardson said in the film, “and my curse. On the track, I was lucky to run fast. Off the track time has deceived me. You don’t know when something or someone will be taken from you.”

Born in Dallas, Richardson was raised by her grandmother, Betty Harp, after she was abandoned as a child by her biological mother, who at the time was battling addiction and mental health issues.

Richardson also struggled with mental health issues in high school and at LSU, where she won the NCAA 100 title and set under-20 world records in the 100 and 200 meters. She turned professional after her first season, signing with Nike.

The race sparked widespread debate in the sport that Richardson not only became the first American woman to win an Olympic 100m title since 1996, but it also jeopardized the Griffith-Joyner world record, a mark commonly believed to have been the beneficiary of false testimony. wind at the 1988 race. Olympic trials.

But Richardson’s Olympic ambitions were thwarted after a urine sample she provided during a post-race drug test following her victory in the 100 Olympic Trials on June 19 last year tested positive for cannabis.

Richardson admitted to using marijuana after learning her biological mother had died that week.

The controversy sparked calls for the World Anti-Doping Agency and USADA to change their cannabis regulations. Biden was among those who called on anti-doping agencies and governing bodies to reconsider their policies. The suspension also seemed disingenuous to many, given that recreational cannabis use is legal in Oregon. There are at least 14 businesses selling cannabis products within a six-minute drive of Hayward Field, America’s most iconic track and field stadium, according to potguide.com.

“I am human,” Richardson tweeted shortly after the suspension was announced.

Sprinter tweeted an image from an interview this week, saying she wished she “never did that.”

“I wish I had a choice when it came time to tell my story,” Richardson said. She did not elaborate on why she regrets the interview.

But this is another Richardson interview for NBC that has many athletes cringing.

In a highly publicized showdown with Elaine Thompson-Hera of Jamaica and Shelley-Anne Fraser-Pryce, winners of the last four Olympic 100 and 200 gold medals, at the Prefontaine Classic last August, Richardson finished last out of nine, well behind Thompson. – 10.54 for Gera, the second result in history.

“This is one race. I’m not done yet,” Richardson said in an interview with NBC after the race. You know what I’m capable of. Count me if you want. Say whatever (expletive) you want because I’m here to stay. I haven’t finished yet. And no one can ever take that away from me.”

Some, like Gatlin, argue that Richardson is just getting started. Gatlin said that Richardson has recently been running faster than Griffith-Joyner’s world record in training.

In competition, Richardson was once again a top threat to Thompson-Here and Fraser-Pryce at the following month’s World Championship in Eugene. She ran 10.92 and finished second behind Thompson-Here on an Olympic-caliber course at the Pre Classic last month, and then ran 10.82 and 10.73 with the wind in Florida on June 4. York Grand Prix – winds allowed from 10.83 to 10.85 – and then returned to win the 200cc race.

Off the track, she continues to be at the center of controversy.

“I had a relationship with a Jamaican athlete who never cared about me because of the jumps,” Richardson said. “I was abused and stolen, but I protected her from the condemnation of her country and family while they dragged me. I had to deal with [homophobia] and many more that I’m still recovering from.”

“I feel obliged to show real needs, what is not said in sports, what needs to be said, is just to show (young fans) that you can be who you are, as long as your thinking and your intentions are pure.” Richardson said. “Don’t let the media, don’t let the people, don’t let the company try to keep you from shining. Because you are the sun. We are the light.”

A few feet away, a growing group of young fans were chanting her name.

“I just want them to know to do it their way,” Richardson said to fans. “Don’t let the limitations of the world stop you, because the world has its flaws.”

ESPN’s Mel Keeper Jr. on Bill and RB Status on the 2022 NFL Draft