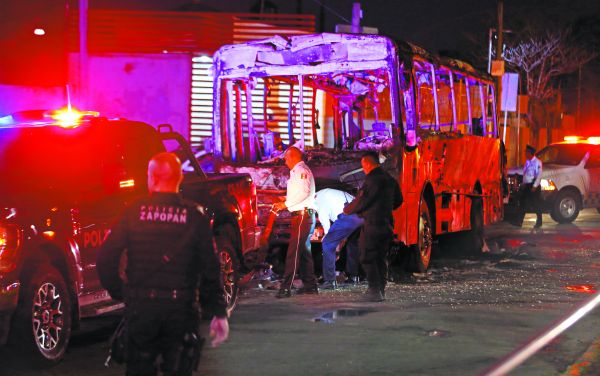 an operation deployed by soldiers and personnel from National Guard against a cell Organized crime in different parts of the metropolitan area of Guadalajara JaliscoThe blockade began with the burning of public transport trucks and cars.

According to federal officials, the device was intended to arrest a member of the Jalisco New Generation Cartel, who was identified as Ricardo Ruiz-VelascoEl RR or El Tripa, identified as the alleged plaza boss of that organization in Zacatecas, Querétaro and Guanajuato.

In this last unit, businesses and vehicles set on fire by armed individuals were also reported in five municipalities: Celaya, Irapuato, Salamanca, Silao You i walk great, Emergency forces were alerted that vehicles, passenger trucks and self-service stores were attacked at at least 20 points.

Governor of Jalisco, Enrique Alfaroconfirmed that an operational action had been taken yesterday afternoon in the municipality of Ixtlahuacan del Río, a mountainous area on the border with Cuquio and Zapopan, where armed individuals fired at members of the 15th Military Region.

Minutes later, civilians torched an Urban truck and another compact car on the highway to Saltillo near the Mesa Colorado neighborhood and then fled into a Nissan Versa and Frontier pickup.

Simultaneously, another passenger truck was set on fire on the Camino a Valle de San Isidro and Rio Blanco avenues; Meanwhile, on kilometer 29 of the highway to Saltillo, the area known as Paso de Guadalupe, another unit burned.

These incidents led to a red code being activated in municipal and state security corporations to track down those responsible, who were identified with security cameras from the C-5 Urban Shield.

In the images, armed civilians can be seen threatening the crew of a gold-colored Pointer while exiting a Nissan Versa, which they doused with gasoline and set it on fire.

Meter ahead of this point, he forced the driver and passengers of a public transport truck to exit the unit and then set it on fire.

At night, the governor confirmed that the situation was under control: “Luckily, there were no casualties. The situation is under control and we are working on this issue in coordination with all the three levels of government.”

Meanwhile, the Secretary of Government in Guanajuato, Libya Denis GarciaSaid that the burning started after the confrontation in Jalisco.

“Subjects were identified in two municipalities who tried to set fires to installations and cars; It has been confirmed that the detainees are there and criminal action is contained and under control, there have been no casualties,” he said.

In Irapuato, they set fire to 13 installations and a gas station, while in Silao and Salamanca they torched two businesses and another passenger truck in Apacio El Grande.

6th January. The detainee writes about his son’s first birthday: “I went there for you, my son”

Third Point, an active investor, is calling for the demise of Royal Dutch Shell.