Jasan, Amritsar. Sidhu Moose – The Best Of Sidhu Moose: Four gangsters related to Punjabi singer Sidhu Moosewala murder case were killed by Punjab Police after 5 hours of encounter. All of them were hiding in a deserted kothi in Bhakna village near Attari. It is being told that these include shooters Manpreet Singh Kussa and Jagroop Singh alias Roopa. In the encounter that started at around 11 in the morning, shots were fired from both the sides. The encounter ended at around 4 pm. After the encounter, people came out of their homes and started gathering in the village. On the other hand, DGP Gaurav Yadav also reached the spot.

The gangsters had modern weapons like AK-47, with the help of which they continued to challenge the police. Three policemen were injured in the encounter. A journalist of a private channel has been shot in the leg, has been sent to the hospital for treatment.

Earlier, about 100 rounds of bullets were fired from both the sides. The police commandos are constantly trying to enter the mansion but as soon as they move forward the gangsters start firing. After this, 2 police vehicles reached towards the mansion with weapons. Armored vehicles were also called to the spot, although one collided with an ambulance.

#WATCH Nothing can be said right now whether they are gangsters or terrorists. Operation is on: SHO Sukhbir Singh, Amritsar pic.twitter.com/OMT4TixhF1

Gangster Manpreet Singh Kussa and Jagroop Singh alias Roopa were hiding themselves with their accomplices in an old mansion built in a deserted area near the Pakistani border. He had a huge amount of weapons. Due to this, bullet proof vehicles were also ordered. 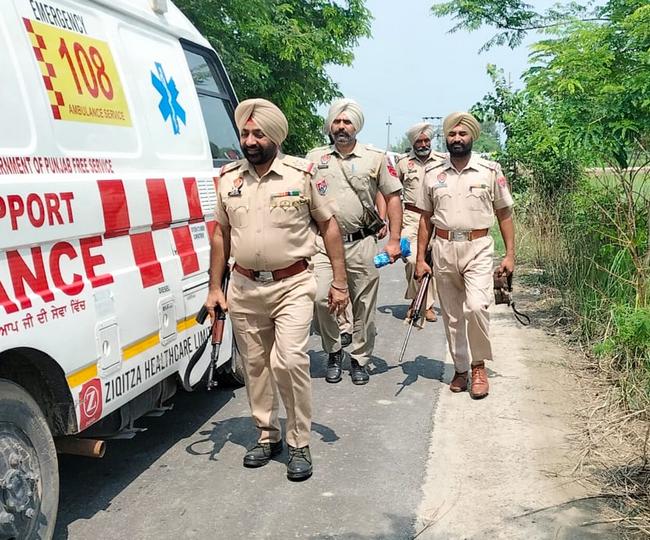 Both Manpreet and Roopa were among the three shooters who killed Sidhu Musewala, who was seen roaming in Moga in a video footage recently.

The encounter between police and gangsters lasted for 5 hours near Attari, adjacent to the Pakistani border in Amritsar. Police used bulletproof vehicles.

Earlier, several vehicles of Amritsar Police reached the encounter site towards the Indo-Pak border as a backup team. Let us inform that gangster Goldie Brar, a member of the gangster Lawrence Bishnoi gang sitting in Canada, has taken the responsibility of the Musewala murder. He had released the audio recently and said that he has no regrets for taking the life of Sidhu Musewala.

Police team challenging gangsters from the roof of a house.

Gangster Manpreet and Roopa were seen in the video footage

Recently a video footage surfaced. In this, the shooters involved in the Moosewala murder case, Manpreet Kassa alias Mannu and Jagroop Roopa were seen going towards Tarn Taran on a stolen bike. The CCTV footage was of June 21 of Moga city. This proved that even 24 days after the Moosewala massacre, both these shooters were roaming in Punjab. Singer Sidhu Moosewala was born on 29th May in village Jawaharke.

Also read – Singer Bhupinder Singh Tribute: Had a special relationship with Devanand, debuted in Bollywood by playing guitar in ‘Dum Maaro Dum’, then became a singer

Judge rules for Chico in trial over scrap metal business