Solidarity is more than a word, it’s a fact 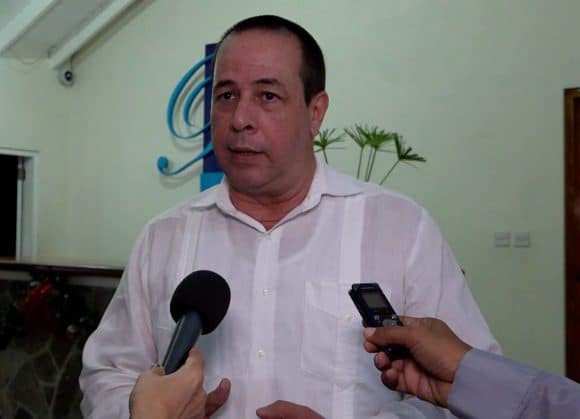 The Minister of Public Health, José Ángel Portal Miranda, made a statement to the Presidency’s press team on the importance of cooperation in health matters in the Caribbean. Photo: Kranti Studio

Kingstown.- “When we talk about solidarity we cannot just talk about words, we talk about facts above all”Appreciating the Minister of Public Health, José Ángel Portal Miranda, as he made a statement to the Presidency’s press team about the importance of cooperation in health matters in the Caribbean.

He said that this is a reality we recognize in our country and have been experiencing it in St. Vincent and the Grenadines in the last few hours.

For Cuba, cooperation in the field of health is indispensable, which, as we well know, extends not only to this sister nation, but also to the entire Caribbean region, where “at the moment we have 1,441 partners, in 13 states”

Specifically in St. Vincent and the Grenadines, he explained, Presently we have 74 associates in various specialties. During visits with our President Díaz-Canel and Vincentian Prime Minister, Ralph Gonsalves, the Minister of Public Health remarked, “We’ve been able to verify with the population the real results of what our professionals are doing, with professionals across this country.”

What has been done, he reflected, shows “how much commitment, solidarity and humanity is in the work done, which also contributes to the benefit of the health indicators of the Vincentian population.”

Not only has medical care brought Cuba to the Caribbean, but also Our small island contributes to the training of human resources to support the medical care of the poorest.

In this regard, the portal Miranda told that till date More than 3,000 professionals from different countries have been trained, in this case as part of the cooperation program that has existed for many years. At this time, he said, We have 641 Caribbean students in our medical science universities.

“When we talk about solidarity, we cannot just talk about a word, we talk above all about facts,” Public Health Minister, José Ángel Portal Miranda told the press team of the Presidency. While making the statement to said that it gains importance. Caribbean Cooperation in Health. Photo: Kranti Studio

On the other hand, Noted possibilities of expanding cooperation involving biotechnology and pharmaceutical industry, It is an issue, he assured, that “we want to take to CARICOM now, because there is already an open path and Cuba is an experience that we want to share with Caribbean countries.”

Sharing what we have is exactly what Greater Antilles does with the world. And that, the Minister of Public Health reflected, is the result of the legacy of the Commander-in-Chief, which has been continued by Army General and President Díaz-Canel.

“We’ve been working with the Caribbean for many years,” he said. There are many stories of how much progress has been made in these relationships and how much they mean to these people.Highlighted Portal Miranda, later to admit that the Modern Medical and Diagnostic Center, visited this Sunday in Georgetown, is a great example of this, and its initial thoughts were in the efforts of the Commander in Chief and Vincentian Prime Minister .

He stressed that the results found here are the result of the high quality services that our professionals provide to the Vincentian population. “It’s a matter of pride for us, and it’s also for our country.”

The Minister of Public Health then spoke of gratitude and respect, who, in the context of the commemoration of the Latin American Medical Day to be celebrated this December 3, congratulated the health workers, “those who are in Cuba and also those who Carry out a mission abroad”.

He recognized that these have been very difficult years, with many complications, and that our professionals have not stopped fighting for the lives of Cubans and other peoples of the world.

What are HeLa cells? A cancer biologist explains