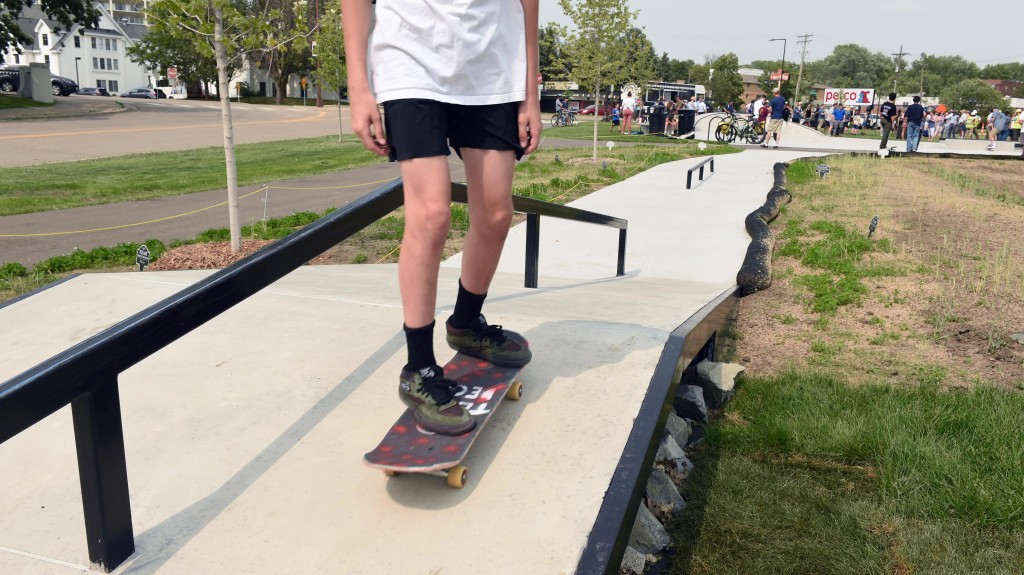 Restless after days of begging and distance learning from their parents at skate parks, Highland Park friends Luke Hanno and Theo Miller put their heads together and act on Miller’s father’s advice. He approached those in the know about all things park and plan at St. Paul’s City Hall with a request.

Soon, Miller and Hanno were in contact with St. Paul Parks and RE landscape architect Ellen Stewart, pitching their idea for an all-ages skater hang-out on a downtown property.

Miller was 11 years old. Hanno was 12 years old. The pandemic just made its strides, making all things fun, but their expectations were as high as they were low.

“We thought maybe nothing would happen,” Hanno said.

He had absolutely no idea how elaborately those dreams would come together. On Tuesday, the boys — now 13 and 14 — joined Stewart, St. Paul Mayor Melvin Carter, Parks and RE Director Andy Rodriguez, representatives from master developer Ryan Coss and others in rolling out the city’s first “skater trail.” The park that weaves from Mississippi River Boulevard at Bohland Avenue to Ford Parkway at Woodlawn Avenue.

Highland Bridge, the former home of the Twin Cities Ford Motor Company manufacturing complex, has officially unveiled its first public facility, and it’s all the rage with 13-year-old boys and other fans of skateboard culture. Rodriguez said the park is the first of its kind in the city, and one of the few skater trails in the subway, if not the state.

“I think we were all a little surprised,” Miller said.

A middle skateboard bisecting the green is lined with a skateboard ramp, rails, pads, A-frame, grind box and other obstacles aimed at different levels of skater ability, as well as a skater bowl where more experienced skaters can wind up. Huh.

Stewart said Hanno and Miller were instrumental in helping to explain to the general community why an all-ages skater trail was at its heart a family feature. “I would never have been able to convince the community on my own,” she said while congratulating the boys.

Melanie McMahon, the mayor’s executive project lead for the redevelopment, said Stewart and other park officials were determined to address unmet needs in the city by programming each of the city’s four future parks accordingly. Later this summer, the city will introduce Unsi Makha Park from Hidden Falls Regional Park at the southern end of the Highland Bridge. It will have a sand volleyball court and a nature play area for very young children.

Also on the horizon is a medical office building, currently under construction, and housing thousands of units.

Pulte Homes has completed a trio of model row homes from two futuristic senior housing buildings being developed by Presbyterian Homes. A new Lunds grocery store will be ringed by the multi-family housing, and custom home lots are also for sale.

A Historic Verdict, and a New Front in the Global Fight for Human Rights