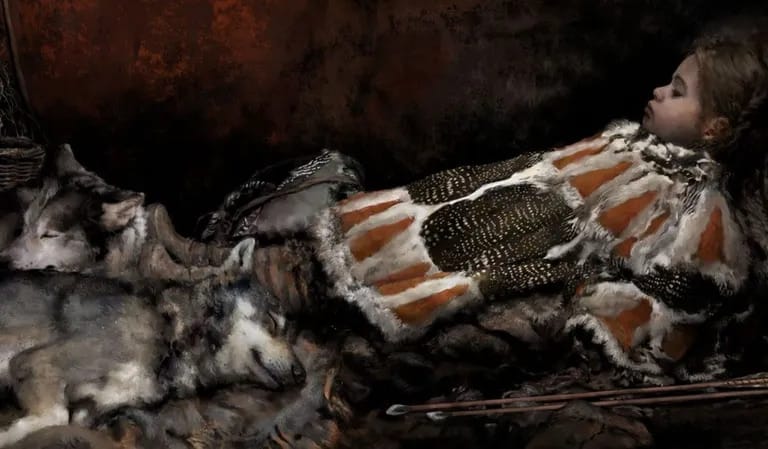 The findings obtained through soil analysis are unique, as organic matter is poorly preserved in acidic soils in Finland. The study, led by archaeologist Tuiza Kirkinen and published in one morefor the purpose of examining How can these highly degraded plant and animal materials be detected through soil analysis?,

During the Stone Age in Finland, The dead were mainly buried in graves in the ground., in the graves of that era Little organic matter has been preserved from man-made objects.But it is known, based on burial sites in the surrounding areas, that objects made of Bones, teeth and horns as well as skins and feathers were kept in the tombs.,

The Finnish Heritage Agency’s test excavation team examined the Majunsuo site in 2018 after it was considered to be at risk of destruction. The burial site was located under a gravel and sand road in a forest, with the top of the grave partially exposed. The site was originally characterized by a dark red ocher, iron-rich clay soil that has been used not only in burials but also in rock art around the world.

Archaeological excavations yielded only a few teeth of the deceased, which made it possible to infer that he was a boy of three to ten years. In addition, two transverse arrowheads made of quartz and two other possible objects of the same material were found. Based on the size of these objects and their dating, it can be estimated that was buried in the Mesolithic period of the Stone AgeAbout 6000 years before BC.

What made the excavation extraordinary was the almost perfect preservation of the soil excavated from the tomb., A total of 65 bags of samples weighing 0.6 and 3.4 kg and others were collected from outside the pit, which were analyzed at the University of Helsinki Archaeological Laboratory. Organic matter was separated from the samples using water and thus, exposed fibers and hairs were identified with the help of transmitted light and electron microscopy.

In this context, a total of 24 microscopic fragments (0.2–1.4 mm) of bird feathers were identified. Seven of them were identified as coming from the bottom of an aquatic bird (Anseriformes), the oldest ever found in Finland. Although it is impossible to pinpoint its origin with certainty, it may have come from clothing made from the skins of waterfowl, such as parka or anarak. It is also possible that the child is lying on a feather bed. Similarly, a falcon feather fragment was identified (falconidae,

In addition, 24 mammalian hair fragments, ranging in length from 0.5 to 9.5 mm, were identified. Most of them had deteriorated so badly that it was no longer possible to identify them. were the best discoveries Three hairs from a dog, possibly a hunter are found on the floor of the tomb, although they may also have come from wolf or dog skin boots.

Additionally, three pieces of vegetable fiber known as “native fiber” were found, which come from, for example, willow or nettle. At the time, the object they were part of could be a net used for fishing, a rope used to tie clothes, or a bundle of string.