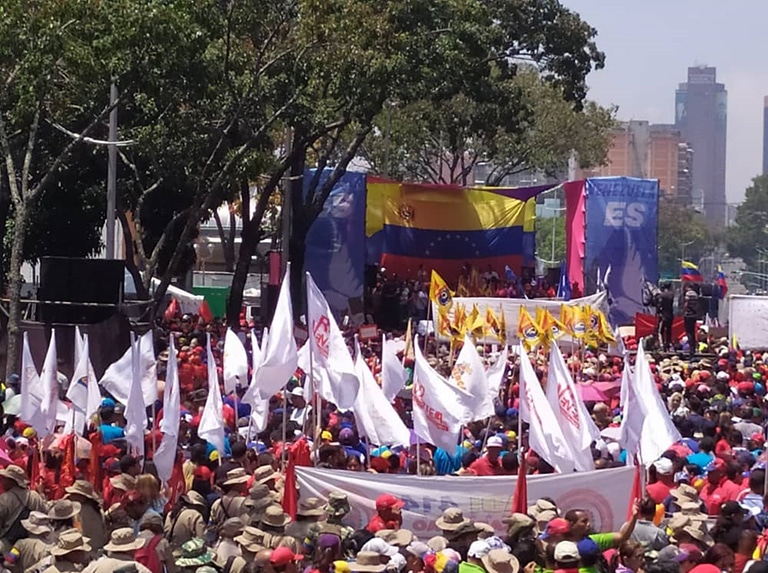 This Thursday, the last week of August held the swearing-in ceremony for the new members of the grassroots structure of the United Socialist Party of Venezuela (PSUV) elected; in the Portuguese state.

The event was attended by the PSUV’s first vice president, Diosdado Cabello, and the party’s liaison to the unit, Blanca Ekhot.

Cabello was sworn in as new members of the PSUV grassroots infrastructure in Portuguesa State, elected in the last week of August, and distributed all new street bosses, communities and UBCHFrom the new manual on the actions of grassroots leaders.

Eikhot insisted that the PSUV should become the “Party for Unity”, having been in charge of “breaking the curse” of treason 200 years earlier with the Liberator, Simon Bolivar.

“That unity can happen only from the base, it is the unity of the whole city. No more betrayal. It is the time of the people, it is the time of victory, that is why our president Nicolás Maduro, the party’s vice president, Diosdado Cabello, and the entire national leadership have worked so that the people can anticipate reaching 2030. Absolute victory”, Ekhot told in statements broadcast by Venezolana di Télévision.

In this sense, he recalled that, at present, Venezuela is facing the imperialism of the United States of America (USA), which seeks to bring the people to their knees, so they must remain united and organized to achieve new victories. And thus destabilizing actions must be defeated. ,

“We are facing North American imperialism, thieves who want to bring our country to its knees, who take advantage of revolution and the only way to face it is through the right organization. We must build a new majority to guarantee victory. will be,” he concluded.

It must be remembered that at this swearing-in ceremony all new street bosses, communities and UBCH will be given a new manual on the actions of the grassroots leader.

Connecting and connecting will be the main task of PSUV

For his part, the first vice president of PSUV, Diosdado Cabello, explained that the main task of the new members of the base structures of the Red Awning would be to unite all people and join together to build a true revolution. ,

The tasks, he explained, would be in the new manual, including the basis of the red canopy and the actions to be taken with the people and the procedures to be done in the country.

“This workbook for the party’s grassroots structure contains the tasks that these teams will have, so that PSUV continues to build the Bolivarian revolution and continues to win every electoral contest,” said the first vice president. red awning

In this regard, he highlighted the leadership of Hugo Chávez, the commander and leader of the Bolivarian Revolution, as well as urging all new members of the party’s grassroots structure to seek out those who wish to join or return to the political organization.

“The Bolivarian Revolution came to this country to support our people,” he said.

It is worth remembering that, over the course of four weekends, PSUVs renovated all infrastructure, starting with the election of over 260,000 road heads and over 46,000 community heads.

5 Minutes That Will Make You Love Music for Dance

In December, there is an increase in the resale of gifts for the holidays