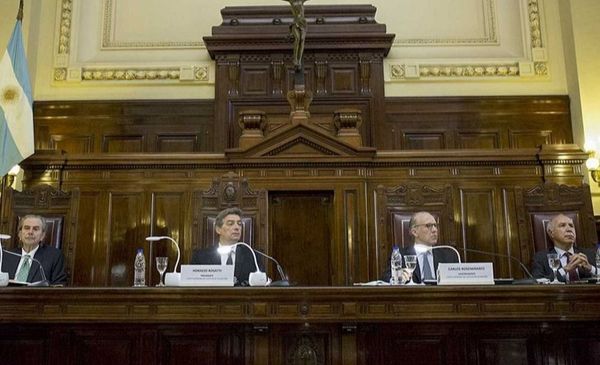 The United States Chamber of Commerce in Argentina, EMCHAM, rejected the Supreme Court of Justice’s reform projects and expressed concern “only at the possibility that it materialises.”

The trade union questioned the ruling party’s intention to pursue the Supreme Court’s “substantial expansion of members” and asserted that “the independence of the judiciary is a characteristic of any republican country, an essential requirement for life in society.” which contains the rights and obligations of its members”.

“While the Justice Service faces serious challenges in responding in a timely manner to all kinds of societal demands, it is worth asking itself whether the solution to the current problems is tripling or quintupling its members, Mcham said.

We share AmCham Argentina’s position regarding possible remedies in the Senate, on the initiative to expand the composition of the Supreme Court of Justice.#cut #justice pic.twitter.com/9hLn0K7nVW

In a statement issued before the start of the Senate session to discuss the expansion of the Court, the North American Chamber of Commerce recalled that the country had “had two changes to the structure of the Supreme Court (1990, 2006), and an associated body Two other amendments to the Judicial Council (2006, 2013), which were created by the last constitutional reform in 1994”.

“While our country has undergone profound changes in these past 40 years, so many processes of change in the two central organisms of Argentine justice seem excessive to us,” he said. And he continued: “Our main challenge today is to strengthen institutional quality and respect the principle of separation of powers. Only through this route can we see a sustained economic recovery with positive indicators in private investment and creation of quality jobs. will be able to strengthen it.”

As the statement concluded, Mcham called on Upper House legislators “to deeply assess these fundamentals, in their quest to build solid and sustainable institutions, within a Republican model of government and for the integral development of society.” asked to create the conditions.

Can Russia be removed from the UN Security Council?

Adjustable mortgages may see a 3.5% rate increase by 2025

Throwback: Know what Sushant Singh Rajput plans to do if he doesn’t get work in films