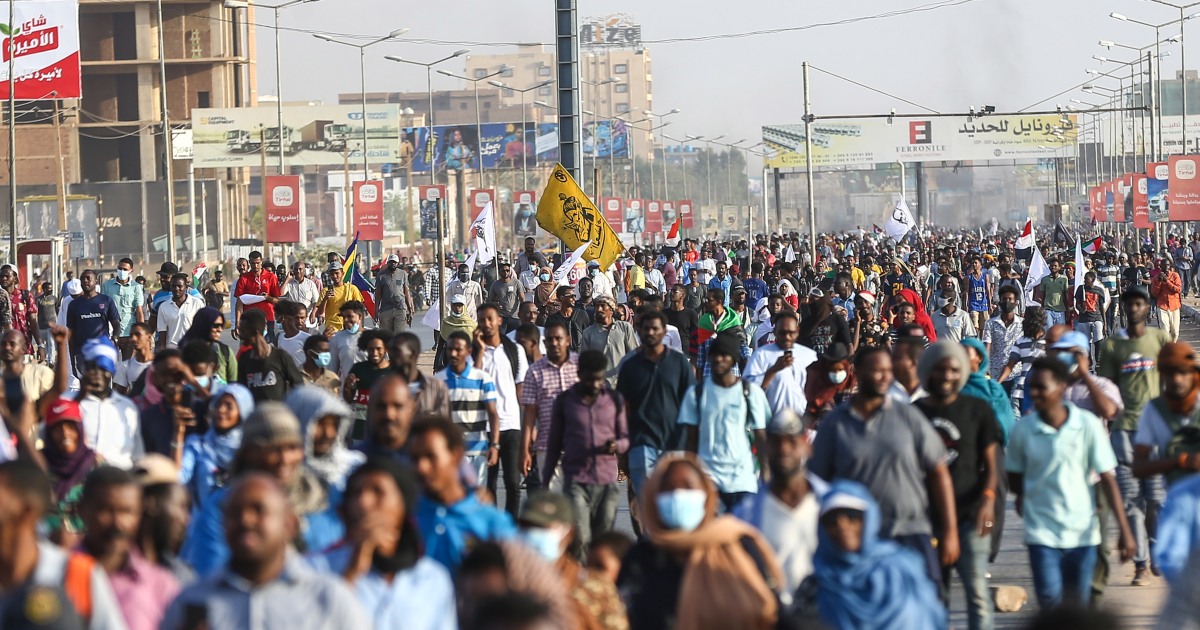 It was around 4 a.m. when I woke up on October 25, 2021, the day the military leadership staged a coup that halted Sudan’s transition to democracy.

My phone was on silent mode. When I checked it, I got an unusual number of missed calls, one of which came at 3:34 a.m. from Khalid Omar, former cabinet affairs minister for Sudan. I tried to return his call but my call was not received. By then, telecommunications had been shut down, and Omar had already been arrested, along with six other ministers targeted by the military leaders of the Sovereignty Council who orchestrated the coup.

Since that morning, political leaders such as Omar have been the target of repeated arrests because of their central role in opposing the coup. The continuing threat to the safety and security of human rights defenders and civil society activists as well as these leaders is a clear reflection of the authoritarian nature of Sudan’s current de facto government and the serious deterioration in the human rights situation. Country.

In November 2021, Omar and other political prisoners were released through the implementation of an agreement signed by the former prime minister with the coup leader. The agreement collapsed in less than two months; It was strongly opposed by Sudan’s overwhelming majority, mainly because it contained explicit language legitimizing the coup.

On February 9, 2022, nearly three months after his release, Omar was again arrested by security forces. He stormed the headquarters of the Sudanese Congress Party, where he was attending a meeting with representatives of various anti-coup and anti-military regime political organizations. Earlier that morning, security forces also deposed Vagadi Salih, a lawyer and key member of the now-suspended Committee for the Removal of Governance, Empowerment and Corruption, and Recovery of Public Money (Dissolution and Empowerment Committee, DERC) of 30 June 1989. was arrested. , a body that was constitutionally tasked with overthrowing the regime of former President Omar al-Bashir after the 2018 Democratic Revolution ousted him from power. Along with him, DERC envoy Al Tayeb Osman was arrested. Later, Mohamed al-Faqi, a former member of the Sovereignty Council and co-chair of the DERC, was arrested on 13 February, and Taha Osman Isshag, another lawyer and prominent member of the DERC, was arrested on 19 February.

These five leaders and 15 other members of DERC have been denied communication. He is not the only political prisoner in Sudan. There are several other members of pro-democracy groups who have been similarly targeted by Sudanese security forces and are currently in detention centers in Khartoum and other cities across the country. According to statements issued by the Darfur Bar Association and the Committee to Protect Those Affected by Unlawful Detention and Mass Murder Martyrs, there are more than 200 political prisoners – many of whom have not even been interviewed, let alone charged with any crime. .

Since the October 25 coup, the targets of arrests and killings have been the most active members of the DERC and resistance committees – youth-led groups that have formed the backbone of pro-democracy street protests. Most of the youth killed since the coup (at least 94) had a history or story of involvement in heroism, leadership and community organizing in the past three years. The leaders of the DERC have been specifically targeted for their hard work to undo the corruption of al-Bashir’s regime and illegally obtained assets by individuals, companies and organizations in relation to al-Bashir’s former dictatorial government. recovery has been made.

To justify the arrest, the coup leaders plan to bring a trial against several of those arrested – Omar, Salih, al-Faqi, Osman and Ishag. Trials are being prepared under section 177(2) of the Sudanese Criminal Act 1991, which deals with criminal breach of trust by a public servant whose punishment is “imprisonment, for a term not exceeding fourteen years, with simultaneous fine, or with death.” with”.

Imprisonment or prosecution of outspoken political opponents is a tactic used in many countries to suppress the voice of anti-government opponents. Depriving leaders and activists of their freedom silences them, preventing them from contributing to the resistance. It is one of the strategies the leaders of the October 25 coup are now using to subdue the revolution and oppose any transition to civilian rule.

The people of Sudan are determined not to end the captivity of political or civil society leaders, which Sudan has been witnessing for three years in a state of revolution. They will strive for the noble goal of a peaceful, free and democratic state. But the international community also has an important role to play. Even as global attention turns to Europe, it is important that international human rights and media organizations pay special attention to freedom and rights violations in Sudan.

Given that current detainees are part of wider human rights violations, such as the killing of peaceful protesters, the United States should, for example, consider enacting the Magnitsky Act of 2012 that mandates them. Senior leaders of the African Union and the United Nations must condemn and call for an end to these detainees. Regional and international human rights organizations – on behalf of the victims – may bring complaints to the African Commission on Human and People’s Rights (which previously decided on matters relating to Sudan) or the United Nations Human Rights Council.

In addition to any legal action that human rights organizations may take, every unlawful arrest and detention must be documented and publicized; These violations cannot be allowed to fade into the background noise. The current situation in Sudan is a political crisis, but it is also a human rights crisis, and should be dealt with as such.