Survivors dig by hand after an earthquake in Afghanistan that killed 1,000 people 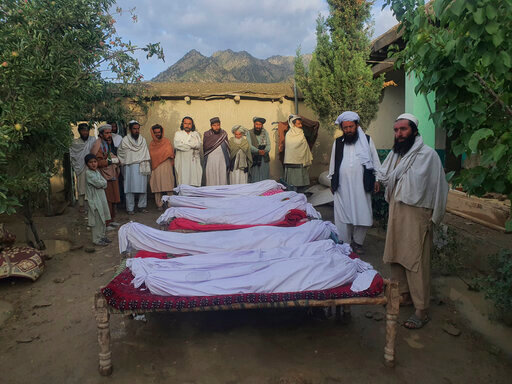 GAYAN, Afghanistan ( Associated Press) — On Thursday, survivors manually tore through villages in eastern Afghanistan that were left in ruins by a powerful earthquake that killed at least 1,000 people as the Taliban and the international community, who fled the takeover, struggled to help victims of a natural disaster.

In the hard-hit Gayan district of Paktika province, villagers stood on mud bricks that had once been a home. Others moved cautiously through muddy alleyways, clinging to damaged walls with exposed wooden beams to force their way through.

The quake was Afghanistan’s deadliest in two decades, and officials said the toll could rise. About 1,500 people were injured, according to the state news agency.

The catastrophe caused by a magnitude 6 earthquake is causing even more suffering in a country where millions of people face growing hunger and poverty, and the healthcare system has been collapsing since the Taliban took power back almost 10 months ago amid the withdrawal of US and NATO troops. The takeover has cut off vital international funding, and much of the world is shunned by the Taliban government.

How – and whether the Taliban will allow – the world to offer assistance remains in question as rescuers without heavy equipment dug through the rubble with their bare hands.

“We are asking the Islamic Emirate and the whole country to come forward and help us,” said a survivor who identified himself as Hakimullah. “We have nothing, not even a tent in which we could live.”

The full extent of the destruction among the villages hidden in the mountains was slowly being revealed. Roads that are difficult to travel even under the best of circumstances could be badly damaged, and landslides from recent rains have made access even more difficult.

Rescuers arrived by helicopter, but relief efforts could be hampered by the exodus of many international aid organizations from Afghanistan following the Taliban’s takeover last August. Moreover, most governments are wary of dealing directly with the Taliban.

In a sign of the intricate work between the Taliban and the rest of the world, the Taliban have not formally asked the UN to mobilize international search and rescue teams or obtain equipment from neighboring countries in addition to a few dozen ambulances and a few helicopters. Afghan authorities, said UN Deputy Special Representative for Afghanistan Ramiz Alekbarov.

However, officials from several UN agencies said the Taliban had given them full access to the area.

According to the meteorological department of neighboring Pakistan, the earthquake was located in the province of Paktika, about 50 km southwest of the city of Khost. Experts estimate its depth at only 10 kilometers (6 miles). Shallow earthquakes tend to cause more damage.

The death toll, reported by the Bakhtar news agency, equaled that of the 2002 earthquake in northern Afghanistan. These are the deadliest events since 1998, when a 6.1 magnitude earthquake and subsequent aftershocks in the remote northeast killed at least 4,500 people.

Wednesday’s quake hit an area prone to landslides, with many old and weak buildings.

In the Sperey region of neighboring Khost province, which also suffered heavy damage, men stood on the roof of a former adobe house. The earthquake tore apart its wooden beams. People sat outside under a makeshift tent made from a blanket blown in the wind.

“It is difficult to collect all the accurate information because it is a mountainous area,” said Sultan Mahmud, head of the Sperai district. “The information we have is what we have received from the residents of these areas.”

Shooting in Oslo believed to be terrorism-related, 2 killed, 14 injured