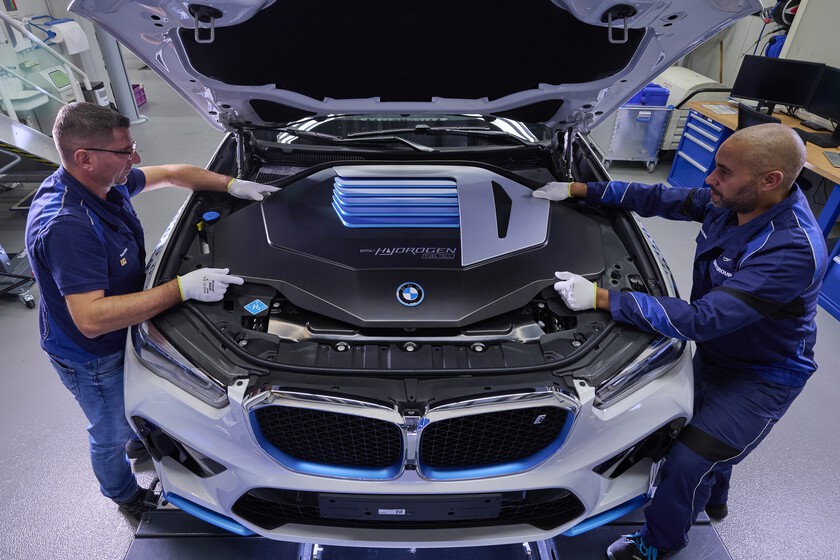 fuel cell car. Hydrogen. Two pieces that are seen as saviors for the automotive industry but which are viewed from afar. in some cases. In Spain, specifically. While the industry is starting to take position, our country is still far behind.

five minutes and zero emissions, How long does it take to fill a car’s hydrogen tank? Fueling with hydrogen is as simple as filling the petrol or diesel tank of our current combustion car. The greatest encouragement raised by the defenders of this technology which only expels water vapor through the exhaust pipes of the cars.

The polluting emissions expelled by the exhaust pipe of a hydrogen cell vehicle are non-existent, this is the flag they carry in the other hand. The benefits of electricity without the waiting time of electricity. A solution that seems ideal and that some manufacturers have wanted to promote for a long time.

only one option, Fuel cells, specifically. Because it seems to be the only sure solution for the use of hydrogen in light vehicles. Some companies such as Toyota are trying to promote its use in combustion engines, burning hydrogen. But its results are highly inefficient, making it a much less attractive option and only useful when focused on competitions and sports vehicles with the touch and sound of combustion, where cost is secondary.

A fuel cell with tanks, which stores hydrogen and which converts the energy into electricity through electrolysis to power the engines, is less efficient than an electric car, but its advantages in recharging time are so great. are that it can make these vehicles a better option. Compared to a purely electric vehicle.

industry, While European institutions have attempted to promote the electric car above any other technology, manufacturers have shown interest in promoting the use of hydrogen as a real alternative. The autonomy that already exceeds half a thousand kilometers and the almost instantaneous recharge are two reasons why this technology offers, on a day-to-day basis, more expensive.

Toyota has been selling its hydrogen car, the Toyota Mirai, for years. Stellantis wants to repair the vehicles to give them access to fuel cells and, thus, enable his van to circulate through the center of cities without polluting substances, but with a much faster recharge. Hyundai is determined to boost its consumption. And now BMW has joined in, who have already started manufacturing their iX5 hydrogen.

First stage, Hydrogen refueling is expensive. On our trip to Germany with Stellantis we were able to verify that the cost is as high as refueling with diesel, but even so, there are some considerations to keep in mind.

First, with so few hydrogen cars on the market, the cost (already very high) gets even more expensive. The second is that, even at diesel prices, there are drivers who would find it interesting to have a vehicle that is essentially electric but can recharge during combustion. An option to keep in mind for professionals or for those who don’t have a garage where they can recharge at night.

And there’s no trace of Spain, In those first steps, Spain has shown no interest in being competitive in the market. Germany and France are the countries that have shown the most interest in the technology and currently only a hundred hydrogeners are available in the German country and fifty in France.

Yes, they are less, but they are 100 (or 50) more than in Spain. Because there are no publicly accessible and useful hydrogen plants in our country. Not even one. The only spaces are owned by research institutes, bus companies or Toyota facilities and are under no obligation to allow tanks to be filled by other drivers.

Of course, if European plans go ahead, Spain is also involved in building large gas pipelines to cross the entire continent and allow more and more hydrogen plants to be added to the network available to its drivers.