The crisis in Peru deepens: they occupy Arequipa airport and four people have already died in the protests – World Nation News 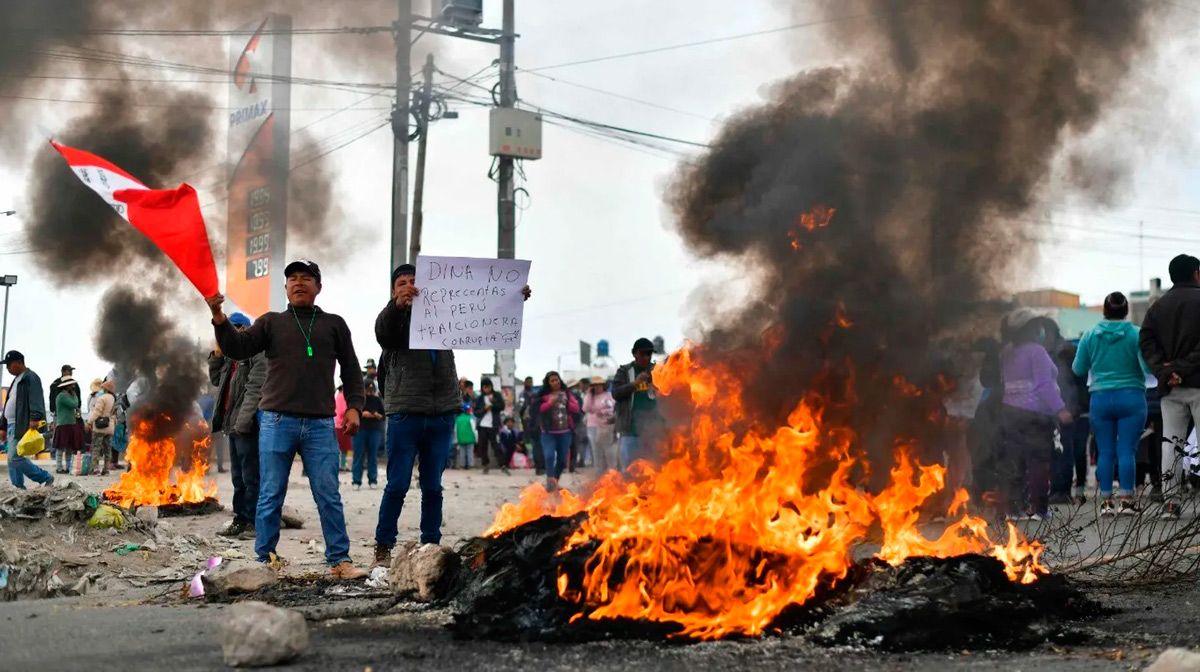 The crisis in Peru deepens: they occupy Arequipa airport and there have already been four deaths in the protests

The crisis in Peru is getting worse by the hour. Two more people died this Monday, taking the total death toll during the protests to four. Protesters occupied the Arequipa airport for several hours. Hundreds of people blocked the airstrip with stones, sticks and burnt tyres.

The runway lights at Arequipa Airport were destroyed and the airport was closed. The police repressed the protesters by firing tear gas shells. Afternoon, Defense Minister, Alberto Otarolasaid that the authorities regained control of the air terminal “thanks to the armed forces”.

We recommend: Dina Boluarte confirms elections in Peru will be brought forward

The victims included two other people – a 15-year-old teenager and an 18-year-old boy – who died on Sunday in Andahuales, in the southern Andean region of Apurimac. Three of the victims were killed in Apurimac and the rest in Arequipa.

Demonstrators are demanding the resignation of President Dina Boluaarte, ignoring her announcement that she wants to push elections until April 2024.

The president’s announcement that he would introduce a bill to Congress to move the elections from April 2026 to April 2024 did not pacify the protesters, who are demanding the former president’s release pedro castilloDissolution of Parliament and immediate fresh elections.

The protests spread to different parts of the country. Access to several cities including Arequipa, Trujillo and Cusco remained blocked in the north and south of the region on Monday.

Castillo has been detained on the orders of a judge, following his failed self-coup last Wednesday and subsequent dismissal by Congress. He was replaced as head of state by his vice president, in the boulevard,

Boluaarte said in the early hours of Monday that he would try to “reach an agreement with Congress” to advance the elections to April 2024. He also announced that he was declaring a state of emergency in areas where violent protests were taking place. Since Sunday the mobilization has spread to various cities north and south of the Andes.

In the southern Andean city of Andahuellas, the Interior Ministry reported two dead and twenty injured, including a police officer, after violent clashes erupted as protesters attempted to storm the city’s airport.

The radio reported that the compound of the Huancabamba police station, a town in Apurimac, was set on fire. rpp,

Repression and protests in various parts of Peru

Thousands of people marched through the streets of Cajamarca, Arequipa, Tacna, Andahuellas, Huancayo, Cusco and Puno over the weekend, according to images broadcast by local television channels.

In Lima, police fired tear gas on Sunday afternoon to disperse hundreds of protesters who chanted “Castillo you are not alone, the public supports you!” They marched to the Congress raising slogans such as, and with banners that read “Dina and Congress are the same rubbish” or “Corrupt rats.”

Lima has always turned its back on Castillo, a rural teacher and union leader with no links to the elite, while Andean regions have identified with him ahead of the 2021 elections.

Peasant and indigenous organizations called for an “indefinite strike”.

Meanwhile, agricultural unions and farmer and indigenous organizations announced an “indefinite strike” starting Tuesday and called for the shutdown of Congress, early elections and a new constitution, according to a statement from Peru’s Agrarian and Rural Front. joined the call. The collective, which brings together a dozen organizations, also demanded the “immediate freedom” of Castillo.

According to the Agrarian Front, Castillo “did not stage a coup” when on Wednesday he announced the dissolution of Congress, the intervention of public powers and said he would rule by decree.

The right-wing dominated Congress approved a norm in the early hours of this Monday that allows the criminal trial against Castillo to be expedited. Prosecutors charge him with rebellion and conspiracy, but are also investigating him for corruption.

Karin Jean-Pierre will be the next White House press secretary