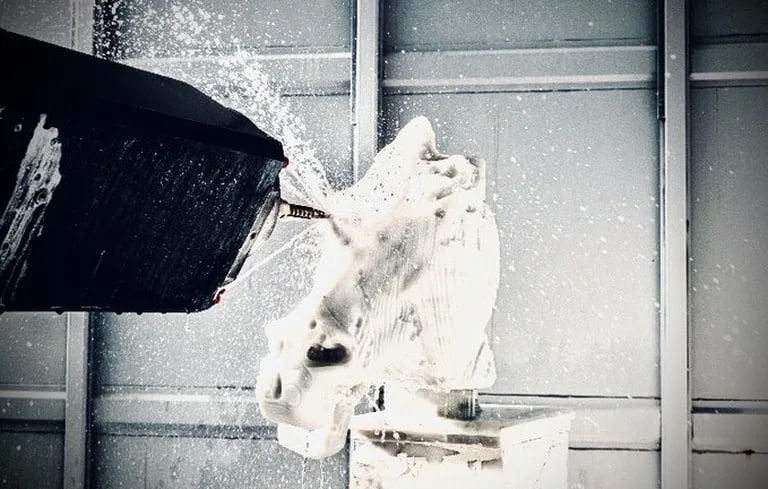 London. – History can take an unexpected turn thanks to the horse’s head, as fans of the film’s saga Saint, In this case, the challenge isn’t so bloody, but it could be the beginning of the end. a historical controversy equally intense and intermittent: the one that has been facing for more than a century Greece and the United Kingdom for the Parthenon MarblesThe statues of Phidias, commissioned by Pericles, were created 2,500 years ago to adorn the frieze, metopes and two pediments of this architectural prodigy and symbol of democracy.

The solution to a bitter and endless disagreement may be found in 3D Printing Technology, The head of this story corresponds to one of the two horses that pulled the chariot of the goddess Selene, the moon goddess. It appears to emerge from the water, as a symbol of dawn, on the eastern pediment of the Parthenon, a temple dedicated to the goddess Athena. It is the most universally known horse head in the entire history of art. And it is part of the booty that Thomas Bruce, 7th Earl of Elgin managed to get from Athens to London. About half of the Parthenon statues, which Bruce also ordered, were, in some cases, looked violently to separate them from the building. He was then the ambassador of the British Empire to the Turkic-Ottoman Empire, under which Athens was subordinate. He sold the sculptures to the British Museum in 1816 for £35,000, which at today’s value is approximately €3 million. The Greek democratic government has been fighting for decades to reunite the stones, which have become symbols of wounded national pride.

In March this year, a team from the Oxford-based Institute for Digital Archaeology (IDA) asked the museum for permission to scan the pieces of marbles. They wanted to work on submillimeter-precision replicas, which would help positively resolve a conflict that has long raised tensions between supporters and opponents of divergence. “For fifty years, the British Museum has justified the retention of the pieces on the idea that the institution’s purpose was to be encyclopedic, and that in addition to preserving them, they placed them in a wider historical and cultural context so that people could understand their meaning. importance”, IDA’s executive director, Roger Michael, explains with irony. Skeptical of the idea, the museum declined the offer. But admission is free, and no one has the intellectual right to work with twenty-five centuries of history. Equipped with iPhones in which they incorporated lidar sensors, a fundamental technology for later reproduction in 3D printing, a team of technicians from the institute took photographs of the work on display.

At a factory in Carrara, Italy, robots equipped with diamond tips to carve marble worked non-stop for four days to complete Celine’s horse head. Roger presented it in a symbolic form yesterday at a location in London as the Sigmund Freud House Museum. The father of psychoanalysis spent his final years there. The legendary Diwan resides in the office, and all the shelves are littered with figures from ancient cultures that Freud loved. Next to the desk is a statue of the goddess Athena.

“Freud developed the theory of object relations. That is why we have chosen this environment”, explains Roger. “The objects, he said, were the mirrors of our soul. When we look at them, we see in them what we ourselves contain.” This philosopher, who is somewhat daring, somewhat idealistic and also somewhat vain, defends that the art of art His proposal could turn a tangled situation by changing the way the exhibition approached.” The Romans themselves had thousands of copies of Greek works, which they themselves created. There are more than 10,000 replicas throughout the rooms of the British Museum, which help to easily explain what the past consisted of. The head of this horse can tell its own story, and if it helps resolve the dispute, becomes a monument in itself with a whole new meaning,” he says.

The replica pictured is perfect, but almost blindingly white. Centuries of history — and moisture, and poor preservation treatments — have given the original that ocher tone patina it would take months to achieve. Those responsible for the British Museum are yet to respond to the challenge, but they have also not tried to initiate a legal response. The debate over the reintroduction of stones has always been kept alive in the United Kingdom, where there has been a proliferation of “committees” in favor of the return of the works, and relevant figures from the worlds of politics, art or literature have defended the majority. The citizens, survey after survey, accept as the logical and fair solution: the return of the marbles to the Parthenon. Only a complex legal argument raised by the museum’s management, which convinced fewer and fewer people, made it possible to stop the return. 3D technology, as seen at the Freud House Museum, has added a new perspective to the debate that places a dead end, and vacated its perceived educational business, which favors placing marbles in London. Huh.