The January 6 panel details how Trump tried to use the Justice Department to stay in office. 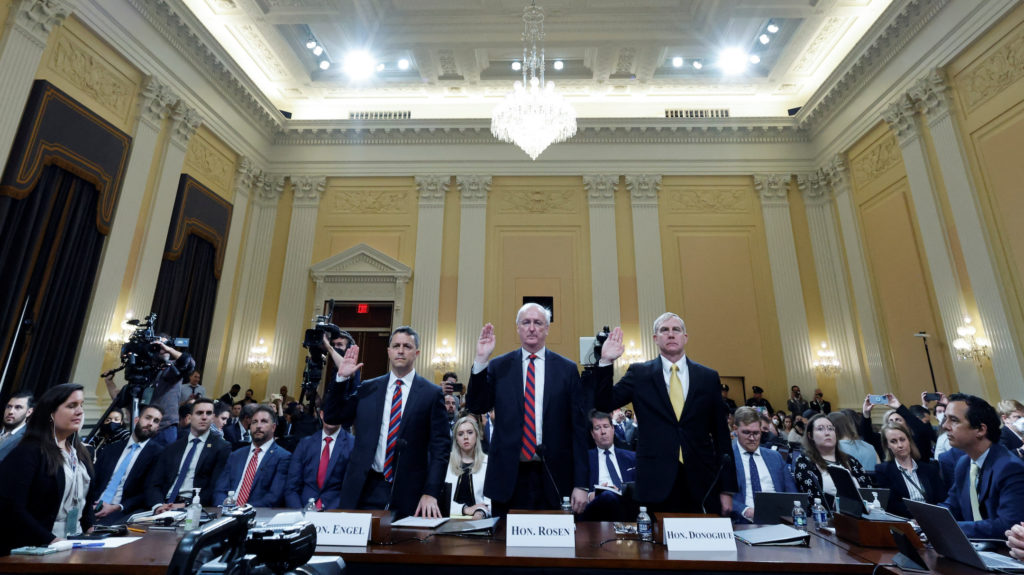 So, at the end of that hearing, Republican Adam Kinzinger gestured to three witnesses who were former high-profile Trump appointees in the Justice Department and said that these people are the reason the presidential coup attempt—forgive me—the presidential coup failed.

He called it a coup, which is really mind-boggling that we’ve come to this point in our democracy. And today’s hearing, which was focused on this dramatic January 3rd meeting in which President Trump wants to topple these three top Justice Department officials so he can appoint Jeffrey Clark, a lower-level man who seems to believe in conspiracy theories and in false accusations of voter fraud, send letters to state legislatures across the country telling them not to send real voters to Washington.

So this meeting is happening. Clark is almost appointed. There are two hours of what has been described as a heated discussion. And then, finally, President Trump gives in because he can’t – he doesn’t think he can do it.

And if you think about where that hearing took place, the day before there was a 67-minute conversation with Georgia Secretary of State Brad Ruffensperger that we heard about in previous hearings this week. On January 3, according to documents and testimony that were presented to the inquest, the Proud Boys had a well-planned plan to attack the Capitol.

The next day, January 4, Trump berates his Vice President Mike Pence in an attempt to get him to agree that he is not accepting the Electoral College vote.