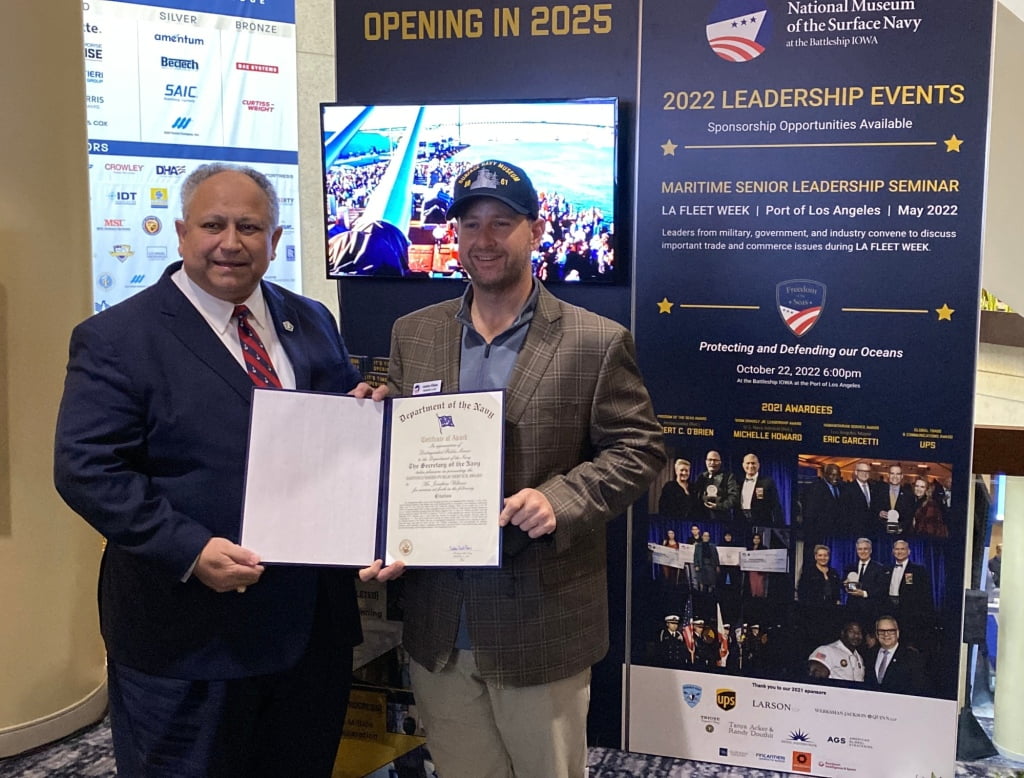 Jonathan Williams received the US Navy’s most prestigious civilian award for his work in bringing the USS Iowa to the Port of Los Angeles and turning it into a Navy-licensed museum.

Williams, President and CEO of the Pacific Battleship Center and President of the LA Fleet Week Foundation, received the Distinguished State Service Award from the Department of the Navy earlier this month during the 34th National Surface Fleet Association Symposium in Arlington, Virginia.

“It’s really been a cornerstone for many years,” Williams, 46, said of the award, which was publicly announced on Monday, Jan. 24. “I think of all the people, the supporters, the friends, the community and the team – everyone. involved. I’m embarrassed on some level to receive it because it’s really a team effort. But it’s a great honor for me.”

The award was presented to Williams by Secretary of the Navy Carlos Del Toro on January 12. This is the Navy’s highest award for non-military civilians.

In 2012, Williams helped bring the ship to the Los Angeles waterfront and worked to raise its profile.

“Jonathan has transformed a historic ship into a world-class museum that brings history to life,” said Ret. Navy Rear Admiral Mike Szatinsky, chairman of the board of the National Surface Navy Museum, “and made it a public platform. which provides programs that give back to the public through educational, veterans, and community programs.”

Williams oversaw the battleship Iowa and transformed it from a floating tourist attraction into a full-fledged museum through educational and veteran outreach programs across the country, and helped make it the site of Los Angeles’ annual Fleet Week. The Navy has recognized him for the leadership and vision he brought to the effort from July 2008 to 2021.

The National Surface Navy Museum will officially open on October 13, 2025, the 250th anniversary of the American Surface Navy.

Williams was involved in the first effort to salvage a World War II battleship that was languishing in a warehouse in Northern California and bring it to the Port of Los Angeles for preservation. He then founded the USS Iowa as a national Navy-licensed museum that provides direct and indirect support to the Navy and has become a major tourist attraction in Los Angeles.

According to the award citation, it is because of his outstanding vision and leadership that “The Iowa Battleship Museum and Los Angeles Fleet Week have become an example for ship museums and Fleet Weeks in recognizing the US Navy and its critical role in serving our country. Peace.”

Iowa’s long-term plans include the ship’s eventual relocation from its current berth near the World Cruise Terminal to a location in the South Pacific about a mile to the south and closer to a new waterfront development, Western Harbor, due to its opening next year.

This year’s LA Fleet Week will feature new attractions more closely tied to the Los Angeles venue, as well as some new connections to Hollywood. This year the event will take place on Memorial Day weekend, concurrent with New York Fleet Week.

The Los Angeles event, which was previously held over Labor Day weekend, began in 2016.

“This is a recognition of his hard work over the past decade in creating a popular and significant historic landmark,” said Seroka, “his talent in organizing the battleship Iowa and his commitment to the creation of the National Museum of the Surface Navy on the Los Angeles waterfront. “.

Past recipients of the Navy Lifetime Achievement Award include legendary actor Tom Hanks for his work in a variety of films including Greyhound; Sybil Stockdale for supporting POWs and their families during the Vietnam War; and Joe Rosenthal for his iconic photograph of US Marines raising the US flag on Iwo Jima during World War II.

Subscribe to The Localist, our daily email newsletter with selected stories from where you live. Subscribe here.