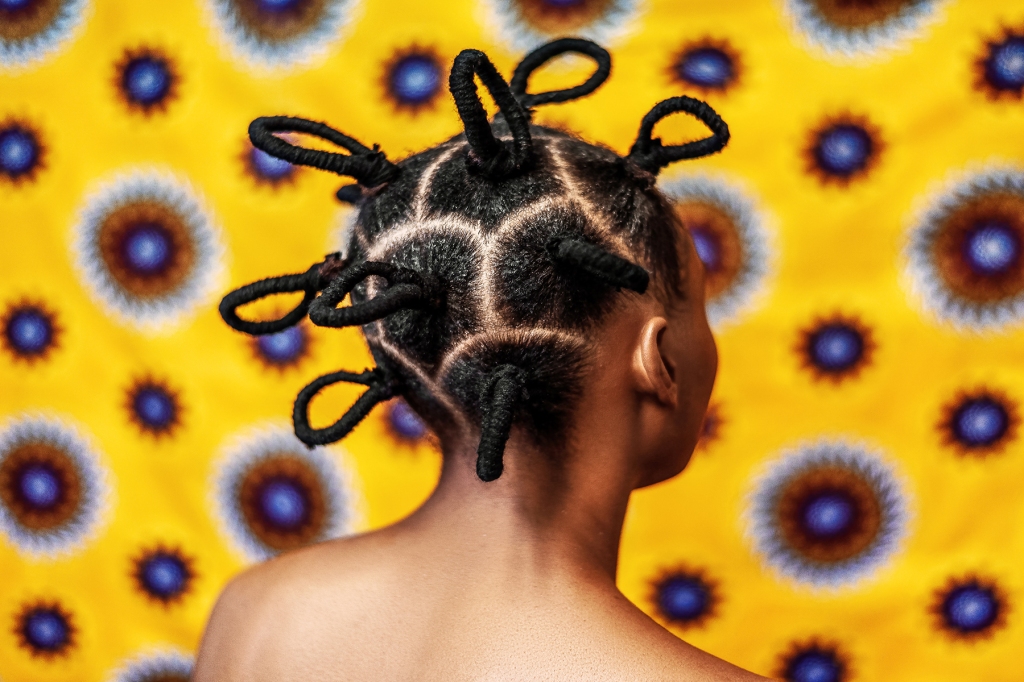 A lot is said about hair in our culture: black hair, blond, brown, red, braided, short, flowing, neon or no hair at all. We love to parse the social meanings of styles and colors and understand what hair says about who lives and owns it in the diverse society of us all.

But hair is really a personal thing. Sure, the way we wear it may send a message to the world, but the world doesn’t wake up with our hair and sleep with it at night. It’s not just looking at our hair in the bathroom mirror when we brush our teeth, feeling it’s texture when we scratch our scalp or blowing it out of our eyes and mouth on windy days.

Hair doesn’t define us as much for others as it helps us figure out who we are with ourselves, be the people we want to spend the rest of our lives with. It is taken from the “Culture of Hair” exhibit currently at the Colorado Photographic Arts Center.

The show, curated by Samantha Johnson, features dozens of photographs from five different artists, and nearly every one of them is a portrait of a person. Quiet, intimate, close, revealing. Subjects are alone with their hair, reflecting less on the politics of it – though, there is some of them – and how it feels to wear it.

In this way, the women who flaunt their locks in Nancy Grace Horton’s “Becoming Grey” series use their hair to acknowledge their maturity and appreciate the grace and wisdom that come with age. The photographer took portraits of several women and recorded them telling their stories, and the exhibit features audio as well as four pigment prints of them.

There is defiance in her voiced narratives – refusing to judge, skipping cycles of trips to stylists for touchups, dismissing what it means to be sexy or attractive. These are stories of triumph, and it’s easy to empathize with them because everyone who watches TV or shops at the mall knows the standards of female beauty today.

But there is something different in his photographs, something close to his devotion to his true nature. Gray hair is what their body has given them and that is what they accept. Horton made them gaze away from the camera and cropped the background into an oval shape to make them look like cameos of old. There’s a timelessness to the photos, and a bit of serenity.

This is a lovely piece of art-making on Horton’s part. By bringing her own perspective as the photographer to the other end of the lens, she achieves a deeper truth, silencing the noisy and frank discussion about gender roles in society and showing us what it means to be human. and controlling our own destiny no matter what people expect of us, on any subject. It’s about more than the hair.

That’s the strand that holds this show together, the idea that children are a place for creativity and expression, for individual art and exploration, for indulgence, health, and satisfaction. It runs energetically through Inyang Asian’s series “Ideate”, which celebrates aspects of Nigerian culture, showing how women weave threads into their hair to make it into loops, ropes and curls that which comes out of their heads.

There may be a social context to these hairstyles, and as Asian says in their statement, there are specifics to certain regions or status that women hold in their communities. But these illustrations are really about hair in a personal sense because they focus so much on how the subjects wear it. Again, we don’t see faces, but we feel their presence as people who chose to arrange their hair a certain way because of how it makes them feel. These are not pictures of creatures; They are individuals, even if we do not know them personally.

This oblivion is also central to Tara Bogart’s series, “A Modern Hair Study,” which photographs four different women from behind, with only their heads and backs visible. This is Bogart’s update on a series of 19th-century images he viewed through a photo archive.

Women are groomed alike, and all look alike, even if they have different skin colors and hair textures. In this sense, they represent the universal idea of ​​young womanhood. But the way they choose to style their locks and the way they color or surround them with tattoos stand apart. We don’t know them as individuals, but we do see how they exercise those choices, revealing themselves as they move through adulthood and into their bodies. They stand for everyone of a certain age.

Regina Hoffman also uses the technique of combining interviews with portraits and both the images and the “hair stories”, as she calls them, are compelling. Scan the QR code next to a shot of him and the person in the picture gives a brief about why they cut and dye the way they do.

The stories are full of surprises. Like the young lady “Julia,” who talks about how daring it was to cut her hair too short and how her mom disapproved, but how it helped her understand and accept her “tombboy” persona. You’d expect it to be a story of rebellion against tradition, but it’s the exact opposite: it’s a story of romantic self-awareness.

Finally, there’s a video on the show, a 4:52 monochromatic loop from DM Wittman called “The Haircut or … Learning to Let Go.” The video channels two that document Wittman shaving his head with clippers, going straight from chin-length wisps to bare skin. She stares straight into the camera, her gaze grim as she describes the ritual as an expression of grief in response to communal trauma.

Hard to see, but do. Because the video brings depth to the entirety of “hair culture.” In the other series of exhibitions, hair looks like a tool; Here it looks like a weapon against things that will shape us rather than shape ourselves. Wittman does what other actors do, only in a slightly more dangerous way.

“Hair Culture” isn’t a huge show, it just fits in one room. But what it suggests is something bigger and contradictory: that hair isn’t really meant to be shown to others. It is not about projecting an external force as much as it is complying with our own will.

Worldwide Microwave Oven Industry to 2026 – Players Include Bajaj, Brandt and Midea Among Others

Grattan on Friday: The election gave the gift of crossbenchers but what impact will they make?