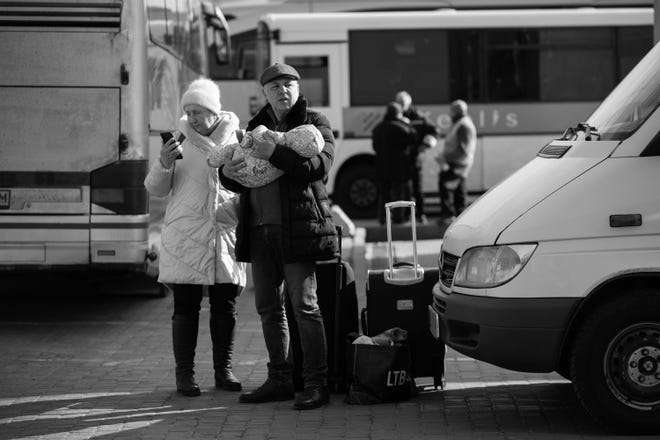 As fighting continues in Ukraine, pictures of children amid the conflict are circulating on social media.

A photo of a young girl holding a gun while sucking a lollipops, posted on March 15, was shared more than 1,500 times in three days.

“So here’s a 9 year old girl sucking on a lollipop while she hits some shit,” reads part of the caption.

The photo has also garnered over 20,000 shares via other posts on Facebook. from them share post on twitter The former President of the European Council and former Prime Minister of Poland was Donald Tusk.

But the picture does not depict a young girl preparing for war. According to her father, it was staged before the Russian invasion.

girl is not fighting in war

While the post implies that the girl is fighting in the conflict, the girl’s father, Oleksiy Kyrychenko, said in the caption of the original photo that she was not.

“I decided to make some photos that could draw attention to a potential war,” Kyrychenko wrote on Facebook on March 13. “I want to demonstrate what Ukraine may look like in the near future.”

“This is a picture of my daughter with a candy and a shotgun in an abandoned building,” he wrote in the caption. “The gun is mine, the daughter cannot fire. She is 9 years old. Of course, the gun was not loaded when the photo was taken.”

In his post, Kyrychenko said that he lived with his wife and three children in a small town near Kyiv. Apart from his engineering job, he made photography his hobby.

According to the Ukrainian Prosecutor General, in the three weeks since Russian troops invaded Ukraine, at least 103 Ukrainian children have been killed.

The post comes at a time when social media is flooded with pictures of young children, some of which have been taken out of context or unrelated to the current conflict.

Kyrychenko told USA TODAY that he didn’t expect the picture to go viral.

“I expected it, but didn’t expect this kind of response,” he said in a Facebook message.

Kyrychenko said he and his family are currently in western Ukraine.

Fact Check:Fact Check: Photos show Mosul in 2017, a day after the Russian offensive began in Kyiv

Based on our research, we consider the claim to be FALSE that a young girl in a photograph is preparing to fight in Ukraine. Her father said in a Facebook post that the picture was taken before the Russian invasion.

Thank you for supporting our journalism. You can subscribe to our print edition, ad-free app or electronic newspaper facsimile here.

Our fact-check work is partially supported by a grant from Facebook.

50 years after Stan Smith’s Wimbledon title, his signature shoes are still quite a feat