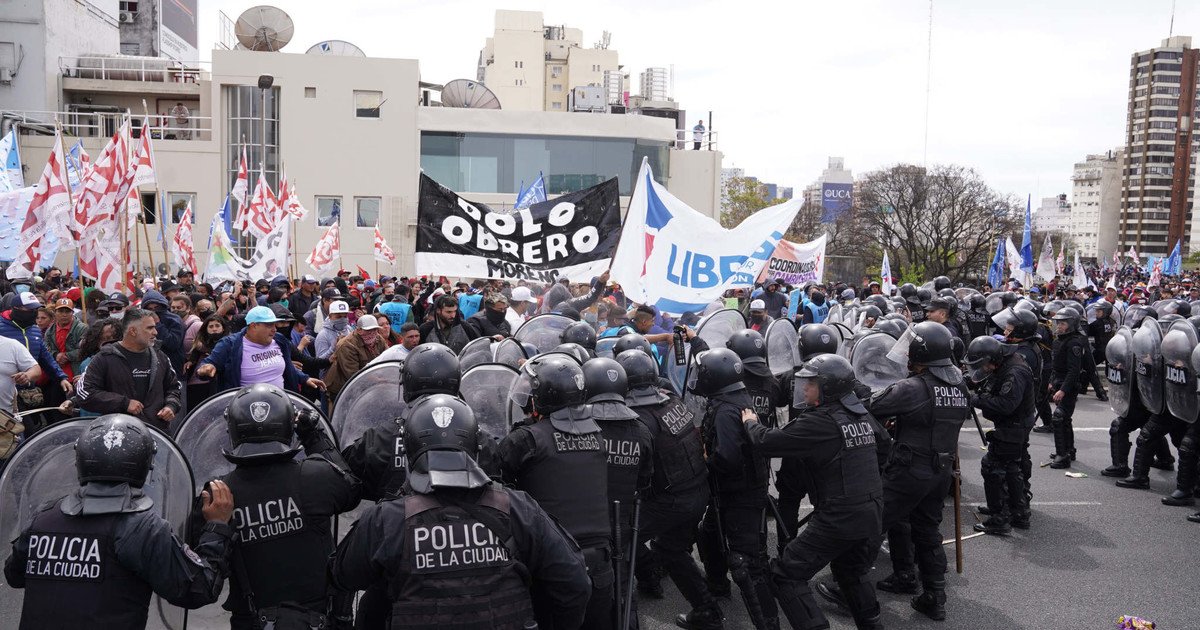 The terrorists of Polo Obrero and MST joined the camp in front of the Ministry of Development.

Amid the tense atmosphere caused by the camp in front of the Ministry of Social Development, Polo Obrero and MST’s picketers cut the 25 de Mayo highway on Thursday and caused a Traffic chaos in one of the city’s main thoroughfares,

Protesters blocked access to the highway in Constitución, a few meters from 9 de Julio South Avenue, and clashed with city police officers, who eventually managed to clear the road by pushing the picketers,

Minutes after the blockade began, a team of police officers positioned themselves on the road, but several meters away from the protesters.

Agent Carlos climbed the highway through the descent on Calvo and shortly afterwards he was already standing in front of the picketers.

Ordering the protesters to disperse, the police moved a few meters away from the Picetero column and tensions escalated.

A group of picketers confronted police ignoring orders to leave the highway, and there were a few incidents where the soldiers eventually managed to push the demonstrators towards a descent towards 9 de Julio.

It did not take long for the City Police to push the picketers, who headed towards 9 de Julio and continued their march along Lima Street towards the Ministry of Development.

“Anarchy is not going to happen in the city, we are going to stand firm. It is solved by politics: Minister of Social Development, Minister of Labor, where are the plans of the economy?” D’Alessandro maintained.

In addition, D’Alessandro linked the cuts on the highway with the rest of the demonstrations that have strained the social atmosphere in recent days.

“We come from a week in which they set fire to a gendarmerie checkpoint, they took over the Ministry of Labor, schools. The lack of response to a complex situation that cannot be fixed with the police is poverty,” said the official Insisted.

For his part, continuing his criticism of the government, Pictero leader Horacio Belliboni questioned the fact that they had been “for three days without the slightest response” and ironically asked: “Does anyone know? Where is Minister Zabaleta?”

In statements to TN, Belliboni questioned the Minister of Social Development, Juan Zabaleta, and focused on the internal government.

“They are the ones who are divided, because they two cannot come to an agreement in the Ministry of Social Development to do things. Because when they tell us that there are productive projects like we want to do, they never come out “Social Leader.

One of Belliboni’s messages was ironic, in reference to the links other social leaders and pickets have with individual government officials, such as Grabois most rigid Kirchnerism or Persico with Evita.

Strong message from the government to the picketers

The government’s response was not long in coming, amid inquiries from Piketeros leaders and it was Gustavo Aguilera, the deputy minister for social development, who targeted the protesters.

“We are negotiating informally and permanently on the instructions of Minister Juan Zabaleta. We are sensitive, but we believe that the path is not planned and we are asking them to negotiate without camp, without any mobilization of whatever is in the circumstances. We all are in mind that the way to talk is don’t act like we’re barabravas“, he sentenced in conversation with TN.

Aguilera said from the ministerial headquarters they coincided with the diagnosis of the dire social situation that the popular region is going through, but stressed that the solution is not to offer more social plans.

“The Polo Obrero proposes that the way more is with social planning, we are with production and workThat’s where we have differences,” he said.

In addition, he pointed out that currently there are agreements with social organizations to distribute machines and equipment so that they can carry out productive projects in the neighbourhood.

“There are organizations that participate in the process of organizing popular neighborhoods with cooperatives, they have agreements with the state, we agree on that, we want work,” he said.