The Princess of Asturias Awards in figures 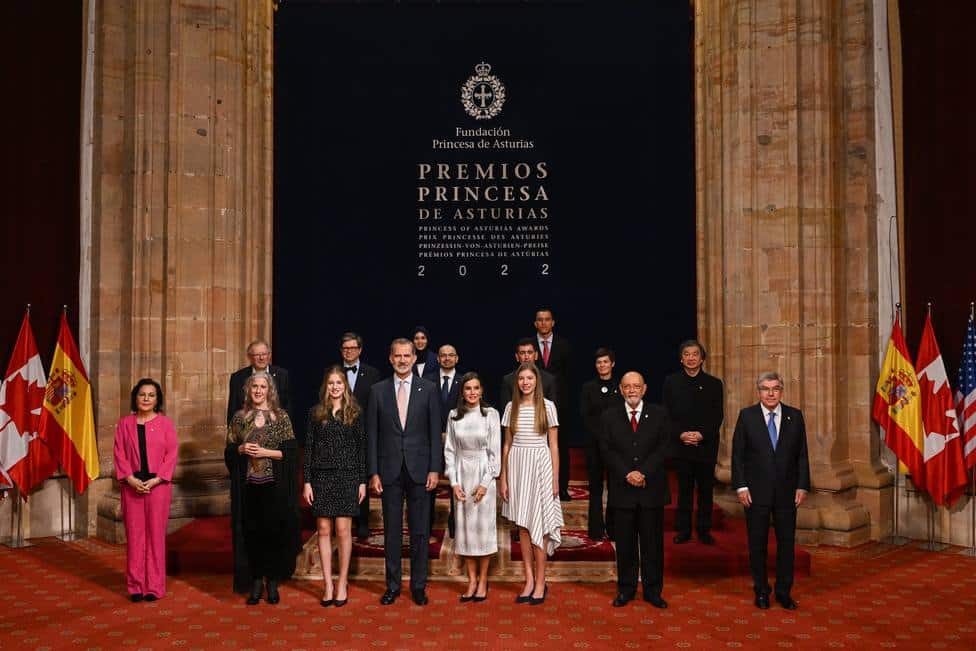 The Campomore Theater in Oviedo hosts the delivery ceremony of the Princess of Asturias Awards this Friday, which reaches its 42nd edition this year, The history of the awards spanning more than four decades can be summarized in the following figures:

1.- On only one occasion has Don Felipe de Bourbon been absent from the award ceremony, holding the title of heir to the Crown. In 1984 when he completed the equivalent of University Orientation Course (COU) at Lockfield College School in Toronto (Canada).

2.- The Princess of Asturias Foundation has had two directors since its creation in 1981, journalist and promoter of the initiative, Graciano García, and lawyer Teresa Sanjuerzo, who replaced her in 2009.

3.- On October 3, 1981, the first delivery of the then Prince of Asturias Awards was held, the earliest date of a ceremony, with the latest date in the 1994 edition being November 29.

Economist Ana Isabel Fernandez will then assume the presidency following the resignation over health reasons of the Professor of Business Administration at the University of Cambridge Mauro Guillen’s Judge Business School, who was appointed last May.

8.- Eight kilos is the approximate weight of the Joan Miró-designed statue that the winners receive in various categories, also eight, the Princess Prize. Each of them, handcrafted and numbered at the Parellada Foundation in Barcelona, ​​are later sent to the winners after receiving recognition badges and diplomas on the day of delivery.

22.- Twenty-two years is the age of Spanish tennis player Rafael Nadal, who achieved sporting glory in 2008, the youngest winner in the history of the awards. Nadal is followed twice in that category as well. F-1 world champion Fernando Alonso, who won it at the age of 24.

23.- The largest number of representatives of the winners who appeared on the stage of the Campomore Theater. This corresponds to the Concordia Prize given to the Spanish language by the Royal Spanish Academy and Association of Academies in 2000. Eleven of the thirteen winners will receive their distinction this year in the absence of scientists Yoshua Bengio and Geoffrey Hinton for medical reasons.

40.- So far forty speeches have been delivered by Don Felipe de Bourbon at the award ceremony. He only stopped interfering in 1984 when his father, King Juan Carlos, spoke in the absence of the then Prince of Asturias.

59.- This year the so called ‘Awards Week’ consists of 59 cultural events in different locations of Asturias in which the figures of the winners are brought closer to the society.

98. – 98 years The oldest winner was the age of historian Ramon Carande (Social Science, 1985). Next, with 94, was the composer Joaquín Rodrigo (Art, 1996). Ennio Morricone (Arts, 2020) and Claudio Sánchez Albornoz (Communications and Humanities, 1984), who were 82 and 90 years old respectively when they were awarded the prize, died before the award ceremony was held.

105. In the 42 editions of the Rajkumari Awards, there have been 105 esteemed institutions.

137.- During the distribution ceremonies held since 1981, 137 speeches have been given in thirteen languages ​​(62 in Spanish, 43 in English and 11 in French as the most representative languages ​​and, as a curiosity, one in Ladino, Corresponding to Sephardic communities distinguished by the Concorde Prize in 1990).

Oceania is the least represented continent with one award in Australia and the other in New Zealand, figures shared by both countries with Jordan, Afghanistan, India, China, Lebanon and Cambodia, compared to the five achieved by Japan. , the same amount that has been received by Russia.

Six awards for Israel, two for Palestine—similar to Turkey—while the African continent has 15 awards, three of them for South Africa.

245.- In the forty two years since the first edition of the awards, 245 individual awards and 68 shared awards have been presented.

435.- The city of Cadavedo, located on the coastal strip of the western region of the principality, has 435 inhabitants, who are this year coveted with the award for the exemplary city of Asturias.

775.- The number of people participating in a parade made up of pipers and dancers who parade through the streets of Oviedo during the Princess Awards ceremony.

1,313.- Capacity available for a distribution ceremony that returns to normal this year after two years marked by the pandemic in its traditional setting, a Campomore theater that celebrates its 130th anniversary this year.

5,773.- The number of primary, secondary and graduate students from 103 educational centers registered to participate in the “Take the Floor” cultural program promoted by the Fundación Princesa to publicize the figure of the winners in each edition.