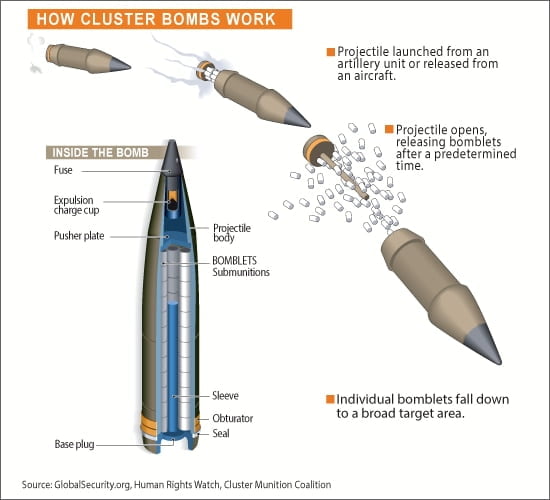 Geneva-Author Cluster Munition Monitor 2021 According to the report, since the “Cluster Prohibition Treaty” came into force in 2010, tremendous progress has been made in eliminating these deadly weapons.

The report said that the remaining problem lies in those countries that have not yet joined the convention.

Last year, non-member states Armenia and Azerbaijan used cluster munitions in the war for the disputed Nagorno-Karabakh region.this Monitor It recorded 107 casualties caused by cluster munition attacks in Azerbaijan, which was the country with the largest number of casualties among all countries last year.

Since 2012, Syria has been using cluster munitions.

Mary Wareham, Director of Weapons Advocacy at Human Rights Watch, said that compared with previous years, the use of weapons will be greatly reduced in 2020.

She said that another obvious example of the treaty’s success is the destruction of stockpiles.

“We know that today at least 1.5 million cluster munitions and more than 178 million submunitions have been destroyed from stockpiles,” Wareham said. “This shows that the convention can indeed save lives, because each of these explosive submunitions can take lives or limbs.”

Globally, the monitors recorded at least 360 new cluster munition casualties in 2020, which were caused by the remnants of attacks or explosions.Editorial department MonitorLoren Persi stated that children are the main victims of these weapons, which kill and maim civilians indiscriminately.

The report states that many of the 16 countries outside the Convention reserve the right to continue manufacturing cluster munitions even if they do not currently do so.

The authors of the report stated that they are concerned that China and Russia are actively researching, testing and developing new cluster munitions.

China, Russia and the United States have not yet joined the convention. These three countries are one of the five permanent members of the UN Security Council.

Healthy eating: the key to productivity and energy during the day

Can the Fed regain its credibility?

DreameBot L10S Ultra Clean your house and clean yourself