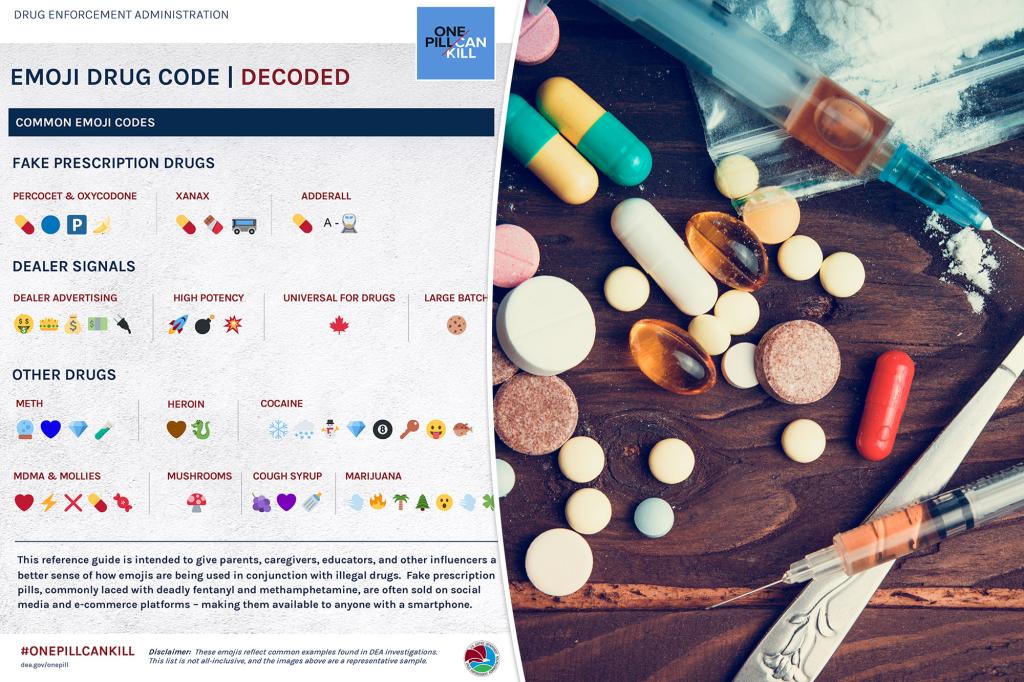 Teens are buying deadly drugs from strangers on social media — and they don’t even have to name the drug they’re looking for.

According to the Drug Enforcement Agency (DEA), tech-savvy teens simply message a sequence of emoji that symbolize the substance they want so that their dealer can avoid any form of digital identification.

Secret codes also help young people keep their habits a secret from their parents, who might not know what emojis actually represent.

Now, the DEA has released a chart titled “Emoji Drug Code: Decoded” to raise awareness of the secret set of symbols amid the growing number of teen overdose deaths.

“The purpose of this reference guide is to provide parents, caregivers, teachers and other influencers a better understanding of how emoji are being used with illegal drugs,” the federal agency wrote.

According to the chart, Percocet and oxycodone can only be ordered by sending a pill, a blue dot and a banana emoji.

Heroin, on the other hand, may soon be on a teen’s doorstep if they text a brown heart emoji and a dragon emoji.

The DEA claims there are emoji that symbolize a request for “high potency” drugs. If you see the bomb, fireworks or rocket ship emoji in your teen’s text series, you might want to be on the alert.

Heartbroken parents Stu and Deb Schmill wish they knew more about the dangers of digital drug orders before their 18-year-old daughter Becca died of an overdose in 2020.

According to the parents, the young man used digital shorthand to order deadly drugs from Snapchat.

“We had no idea how easy it was for him to basically deliver drugs to our door,” Dad Stu told NBC News.

Sadly, Schmill’s story is similar to that of many others across the country.

And it’s not just emoji that teens are using to evade identification, opaque slang words have been thrown into the mix as well.

Eric Feinberg, who works with the non-profit Coalition for a Safer Web, says there’s a whole lot of secret language used by teens and their dealers.

Spokesmen for both Snapchat and Instagram told NBC News that they “prohibit the sale of illegal drugs” on their platforms. Both companies further claimed that they use state-of-the-art technologies to “actively” trace any accounts linked to drug dealers.

According to a previous report published in The Post, not only is it becoming easier for teenagers to order drugs, but they are also getting deadly.

Director of the National Institute on Drug Abuse, Dr. Nora D. Volkow said in that article, “There has been a huge increase in illegally manufactured prescription pills that contain fentanyl, at least 30% of which contain doses that can kill someone.” “We believe this may be one of the factors that is putting adolescents at higher risk for extreme mortality.”

Back in January, a drug dealer was charged with murder after selling fentanyl to a 12-year-old girl who had fatally overdose. Tween reportedly used a slang term to request his drug order.