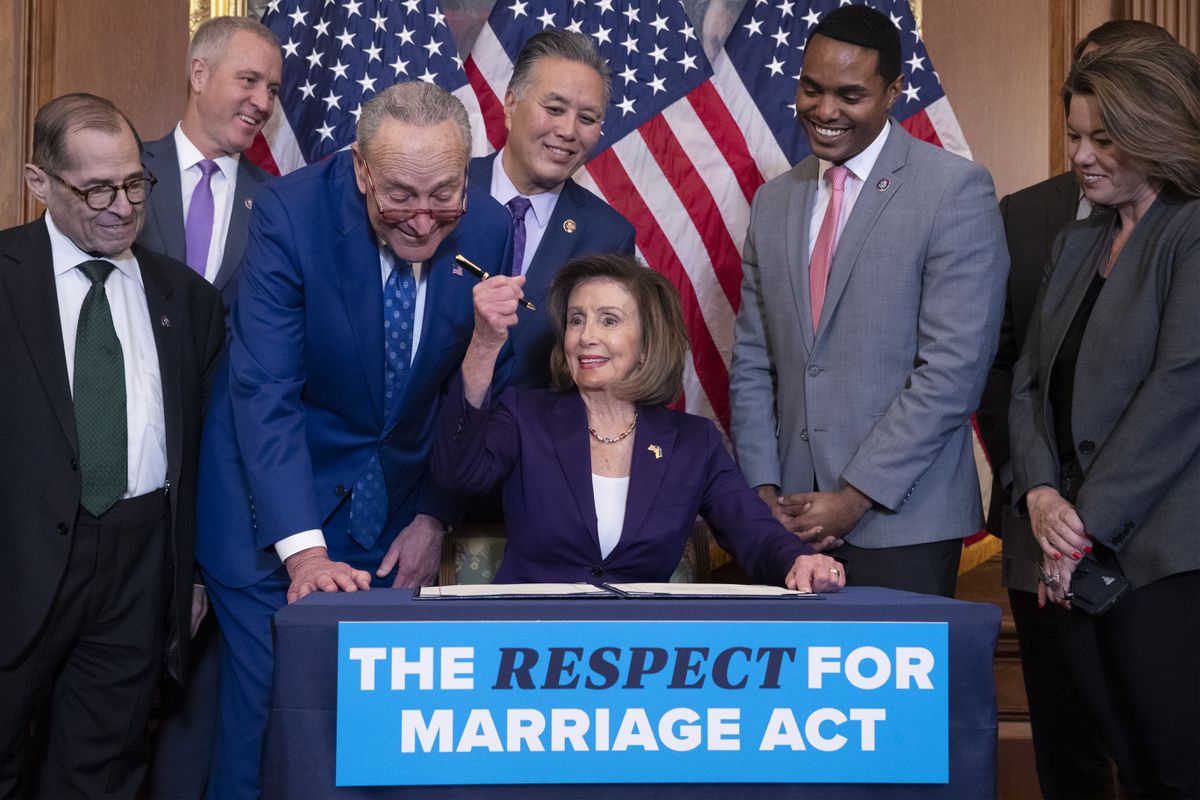 All that’s left is for President Joe Biden to sign it. The United States Congress has finally passed a law protecting the rights of same-sex marriages throughout the country. Following last week’s Senate vote, the House of Representatives has approved by a large majority (258 to 169 votes) a rule that shields same-sex marriage from the risk that the Supreme Court’s conservative majority decides to reverse its principle. has done, which so far recognizes it. as a constitutional right

It is the first time that the United States Congress has passed a law protecting same-sex marriage. Like so many other rights in the United States, the right to marry a person of the same sex was not enforced across the country by federal law, but by a Supreme Court decision.

The new law has already been approved in the Senate by 61 votes in favor and 36 against. The support of many Republican congressmen in both chambers reflects the broad social support for gay marriage that has been won over the past two decades. In 2004 it was legal only in Massachusetts and was opposed even by prominent Democrats such as Barack Obama, who later celebrated, as president in 2015, legalization by the Supreme Court as a “victory for America”.

Support from Republicans has allowed rapid processing of the norm before Congress reconvenes in January, with those chosen in the November 8 election. Most Republicans, in any case, voted against the legislation. In fact, there were fewer votes in favor than in the second version of the accepted text before the election.

Speaker of the House of Representatives Nancy Pelosi celebrated the result of the vote in person. Although there is still some initiative left in Congress before dissolution, this is perhaps the last highly symbolic piece of legislation of his mandate. In the next legislature, Republicans will have a majority in the House to elect a new president, and Pelosi, 82, has already announced she is giving up leadership of her group as well.

This Wednesday, Pelosi published an article Washington Post In which he hailed the expected acceptance of the legislation as a “glorious triumph of love, liberty and dignity for all”. “Just as I begin my career fighting for LGBTQ communities, I am pleased that the last piece of legislation I will sign as House Speaker is the Respectful Marriage Act, which ensures that the federal government will never again stand in the way. Will not come Marry the one you love”, he said.

The new law does not establish same-sex marriage as a federal law applicable throughout the country, but it does prohibit marriages from discrimination because both members of the couple are of the same sex. Thus, in the event that the Supreme Court were to strike down its doctrine, states could prohibit same-sex couples from marrying in their territory, but would have to legally recognize and celebrate same-sex marriages in another state. where it is legal. It’s not a full shield, but it’s a compromise solution with other concessions to get the support of enough Republican senators.

Same-sex marriage has been legal throughout the United States since the Supreme Court, then with a progressive majority, handed down the Obergefell v. Hodges ruling in 2015, striking down laws in Michigan, Kentucky, Ohio, and Tennessee that allowed only unions was allowing a man and a woman. The Supreme Court declared that all states have an obligation to allow same-sex couples to marry. Prior to that decision, it was already legal in 37 states and the capital, Washington. There are approximately 600,000 married gay couples in the United States.

A private vote in a decision on abortion last June exposed the risk of the Supreme Court changing its criteria. Judge Clarence Thomas, with a conservative majority, invited a review of other precedents, including one that legalized gay marriage nationwide. As a result, Democrats in Congress proposed shielding it by law. Several Republican congressmen assured during the debate that it was not true that the Supreme Court’s doctrine was at risk and that the rule was unnecessary. Others continue to dismiss the merits of the issue and oppose same-sex marriage.

Perhaps the protection of the law is not necessary, but the risk is that if the Supreme Court upholds its precedent the restrictive Defense of Marriage Act, approved in 1996, recognizes and denies union only between a man and a woman. decided to reverse. Federal rights and benefits of same-sex marriages and then struck down by the Supreme Court. The new Respect for Marriage law repeals the 1996 norm and explicitly recognizes federal rights to marriage between same-sex couples and people of different races.

The precautions that the text has introduced and that have allowed Republican and even Mormon church support include an explicit recognition of religious liberty that compels churches to celebrate and recognize these marriages. prevents from Failure to do so protects them from losing tax exemptions and benefits. It has also been made clear that this recognition does not extend to polygamous marriages.

Democrats introduced a bill over the summer with little confidence that it would move forward. It was another way to force Republicans to take a pitch before the electorate ahead of the November 8 legislative elections. But Republican senators were open to supporting the legislation if it were left in place until after the election. This comes after efforts by Republican gay politicians and donors to achieve this.

Despite this victory, threats to the LGTBI collective are still in effect. The Supreme Court is now studying a case in which it must determine the extent to which freedom of speech can be used as an argument for allowing discrimination against same-sex couples. The hearing took place last week and Conservative magistrates appeared inclined to back a web designer who refuses to create a web page for gay weddings.

“This will be the first time in history that the Tribunal [Supremo] say a commercial business open to the public, that serves the public, may refuse to serve a customer for reasons of race, gender, religion or sexual orientation”, warned progressive Judge Sonia Sotomayor.

On January 6, the commission summoned 10 more ex-Trump officials to court

Woman found dead inside her apartment in El Ceibo